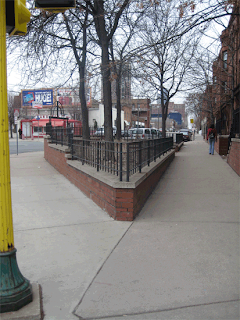 The corner of 14th Street and 10th Street shouldn't exist. In a perfect world, parallel lines do not cross, and street grids carry on in endless right angles, stretching from sea to sea in infinite speculation. But somehow, this Sidewalk of the Week is where the Downtown Minneapolis grid goes a wild and gets a little screwy, as the sidewalks drift off into weird angles trying correct for the Mississippi's crooked ways. Here, somehow parallel lines meet and create a the tiniest of whorls, a little backwards eddy where the smudged sterility of Downtown rubs up against the dirty grit of Minneapolis's mostly-forgotten past.

The neighborhood is called Elliot Park, and it forms a liminal space wedged between two freeways, the HHH, and parking lot moats surrounding skyscrapers. It's where strange bedfellows bump elbows. For example, two friends of mine used to live here in a giant old house with beautiful woodwork and plenty of space, but their driveway was often full of strange strangers and they were a block from the constant din of cars on Interstate 94.

Once I had a picnic in the Elliot Park after work, and it was all very pleasant until an intoxicated and rather grubby individual wandered over and started lurking nearby, orbiting in smaller and smaller concentric circles until he finally converged, informing us that we were at "his spot" and could we please vacate the premises so that he could continue his commercial activities (not his exact words).

And there's a institution of higher education called North Central University where all the students are quite religious and have political views perhaps to the right of my own, and the school's two guards form a strange sight as they circle the infinitesimal campus through the night, walking in tandem with their white shirts and ties and leather bandoliers. 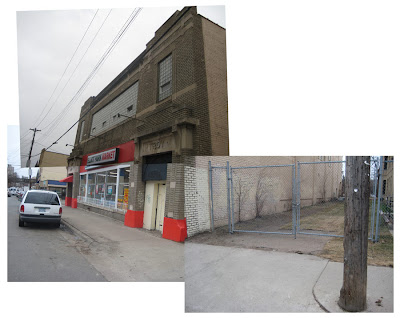 [This building, called “Troy”, houses the white bars of the Elliot Park Market]
Here there are giant old mansions with faded Victorian wallpaper all boarded up and abandoned, subsidized housing, new mixed-use developments across the street from strange and empty shops, old apartment houses with fancy names surrounded by vacant lots next to brand new twenty-story condominiums. It's the border zone surrounding a patch of pleasant parkland, where Minneapolis mixes itself up like a schitzophrenic, all a tumble with people and pasts and ideas for what's to come.

[The way these streets all come together forms a very cozy corner of sidewalkspace, slowing cars and letting the people go their wary way.] 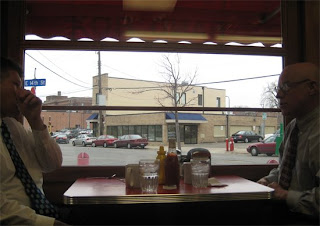 In the middle of this jumble, though, the two streets form a little triangle of old buildings, and at the very center like an oyster pearl sits the Band Box Diner, a forgotten remnant of Minneapolis past, somehow still serving burgers to the whole neighborhood. This little red diner is the last of a long line of like joints that once dotted old Minneapolis like measles, serving tiny White Castle-size burgers to working men under the memorable slogan "Three for a Dime, All the Time."

Now, the Band Box is the only one left, their slogan has changed to "grease for peace", and you can still walk in and sit on the red stools at the counter to watch the short order cook mix up an omelet, or plunk down at the windowside table where you can enjoy your meal and gaze at the mostly empty 14th Street sidewalks (while some jerk takes your picture and puts it on the internets).

[The buildings in the distance ... they are so high, they scrape the sky.]

The diner itself is designed to encourage this kind of people watching, with a bumped out bit of sidewalk space forming the triangular bit where the two parallel streets come together... a lovely piece of pavement with little red concrete bits and little thin trees. The streets narrow enough so that the cars can only crawl, and this little spot in the shadow of skyscrapers feels like a cozy nook, an oases in the midst of surface parking and Metrodomes and medical centers and interstate highway systems. 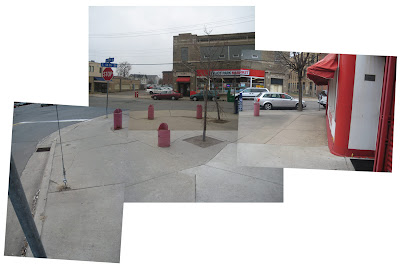 [In front of the Band Box there lies a little sidewalk bump, the vanishing point for the Minneapolis street grid. ]

The sidewalks around here too have a wonderful walkability, running along old buildings whose windows once boasted unimagineable contents. The old brick buildings all have names, like "Troy" or "Cooper" or "Elliot East Condominiums", and bear their delicate brickwork with a faded dignity that would make Faulkner proud. And the sidewalks are almost always eerily empty, quiet and still yet faintly breathing, like in a fairy tale with a princess. These sidewalks are laying in wait, locked and trapped by a magic spell. 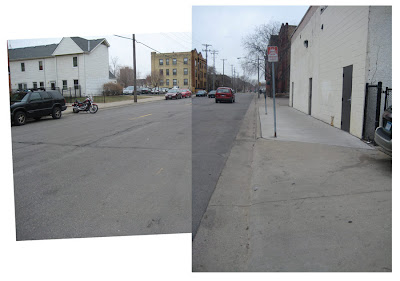 [As far as I know, these streets have no name.]

Somehow, 14th Street is the kind of space that every city needs, places where the kinds of people that aren't welcome are welcome. If cities didn't have places like Elliot Park, places where you walk on the edge of your seat, where your heart beats a bit faster, places of magic and mystery, then cities would be insufferably boring and all-to-perfect.

Instead, 14th Street is the kind of place where you never know what you'll find peeking around a corner ... it might be nothing, or it might be an ancient factory smokestack, or it might be a ghost in an alley bedecked with porches. It may be a forgotten building covered in vines, or it may be the Band Box Diner dressed all in red from foot to head, beckoning you over inside its radiant light with a perfect burger and magical bottomless coffeecup. 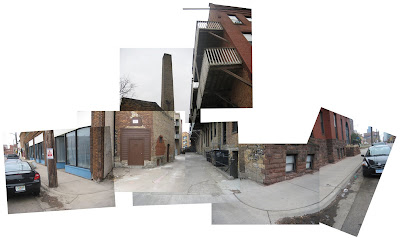 [The alley lies in the midst of it all, home to an abandoned factory that used to make horseshoes, ice skate blades, and pocketwatch chains .]
Posted by Bill Lindeke at 9:06 PM

Good blog. I enjoyed reading your assessment of this part of town.

I am a regular reader of your blog. Good job with this one! I ride my bike in this area, just because its so eerie and forgotten by most.