The need for planning 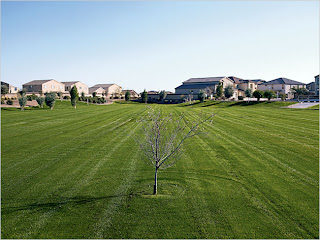 [Image from the New York Times]
Planning is a highly politicized field, probably because people's identities are so closely tied to the land they live on. Because so much is at stake, sometimes it can be difficult to remember why regional planning is so important. Why, after all, should the Met Council have power over cities and towns? Why can planners tell us what to do with our land? What gives them the right?

Well, I loved this article in the NY Times this weekend, about how the town of Maricopa, Arizona was built in Phoenix exurbs five years ago and sits today, its large homes largely abandoned in the middle of a dry desert. Here's just a taste of the wonderfully-written story:

Ideally, a growing city will negotiate with developers to reduce the impact that new residents will have on the area; it might offer the builder smaller setbacks from the road in exchange for providing space for a school or widening roads. But at the beginning of Maricopa’s growth, the city was unincorporated, and all these negotiations were made by a three-person county board of supervisors that was working from rural zoning codes dating back to 1962. As a result, in those early years, decisions about Maricopa were driven by the concerns of developers, who left little space in their plans for business or commerce — just lots and lots of houses. They created blocks of identical homes, because it was more efficient to build with as little variation as possible. They built sidewalks on only one side of the street to save money. They happily left space in subdivisions for playgrounds and five new elementary schools, which they thought would help bring in the young families they were targeting, but they did not leave space for parks for older kids or for a high school. Each builder worked independently, so there were no paths connecting any of the subdivisions.

Planning is important precisely because of situations like this.

Sometimes, the real estate market ends up creating terrible situations. It's kind of a paradox. Everyone acts in their own self-interest: realtors sell houses, owners buy their ideal homes, developers build where profits are highest, and lenders try to make the most money that they can. Everyone is following the rules of the game, acting accoridng to the market. And in the end, everything goes to hell in a handbasket.

Homes lie empty in the city and in the 'burbs, people are homeless and bankrupt, banks go belly up, the economy tanks, and there's no work for developers or construction firms. Plus, now there are a bunch of houses sitting in the middle of what should be a desert or farm field, water has been wasted, construction waste fills the town dump, schools lie empty, and the wetland has been filled in. There are a lot of unintended consequences to unregulated land speculation. And once you build a city, it's going to stay built for decades. You can't 'undo' a development.

We're lucky enough to have a relatively strong regional planning body in the Twin Cities called the Metropolitan Council. We're one of the only regions in the entire nation that has a venue for relatively strong control over where and how development occurs in the region, so we should count ourselves lucky in that regard. Thanks to the Met Council, the Twin Cities metro has the possibility of averting situations like Phoenix, where everyone comes out worse in the end save for a few businessmen making bagfuls of dough. 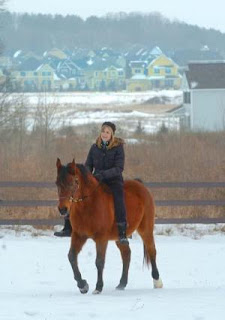 Still, though, we end up fighting tremendous battles over development. Just check out this cover story in the Pioneer Press yesterday, that reveals the different sorts of battles we wage in a region with stronger regional planning. It tells the tale of a woman who owns a farm near Woodbury, who may have to sell out to developers because of property and sewer assemements:

But they may be forced off their farm by — believe it or not — a sewer line.

The Zignegos were horrified to learn that a planned sewer line and new street along their 11-acre farm would cost them $1.5 million in assessments.

"We asked (officials) how we are going to pay for this," Rusty Zignego said.

"They said, 'Well, the normal way is to sell to developers,' " he said.

Along the I-94 corridor, the Metropolitan Council is the choreographer of growth.

It sets growth targets for cities — and gets utterly different reactions from officials.

The council's target for Woodbury by 2030, for example, is 84,000 people, a population about as big as Duluth's. The city embraces growth and has become a development dynamo packed with malls, restaurants, offices and a system of parks connected by trails.

These are precisely the sorts of assessments that the unregulated town of Maricopa did not levy onto homeowners. In the first case they wreaked havoc on the landscape, landing thousands of people in unresolvable debt, and posing tremendous environmental and infrastructural public costs. In the second case, they mark a relatively bittersweet story for a family that, no doubt, is going to make millions off of their land.

I ask you, which is worse?

Many people who write about land use policy and urban planning seem to believe that the market is always the answer. Look at, for example Wendell Cox, Robert Brueggmann, or even Witold Rybczynski. But I feel strongly that, in many cases, what we need is more regional planning, not less. The costs screwing up development are too high to let people's lives and the landscape fall prey to market speculation and unsavory profit.

The market is funny. Even though everyone is doing what's best for themselves as individuals, the end result can often ends up making everyone worse off. Planning, too, can have that effect. Just ask anyone who lived in Saint Louis's Pruitt-Igoe homes. Erring too far on one side or the other can end in disasters

My worry, though, is that in the USA we always favor the unregulated market, leaving the consequences of unplanned growth -- like auto-dependence, environmental damage, and social isolation -- to be paid by future generations and those least able. The market moves in unpredictable cycles, and can easily end up in totally FUBAR situations, like the mortgage crisis and the housing boom. At least, in Minnesota, we have the potential to avert these kinds of disasters.

[Foreclosures in North Minneapolis, h/t Behind the Mortgage]
Posted by Bill Lindeke at 10:00 AM

How many of those red dots on your map represent a family that will be homeless soon? A two-bedroom apartment rents for $1200-1500 in my neigborhood. I've got to think that a lot of folks have not only lost their homes, but been priced out of the rental market, and had their credit ruined by foreclosure. We're all going to be paying for this soon, one way or another.