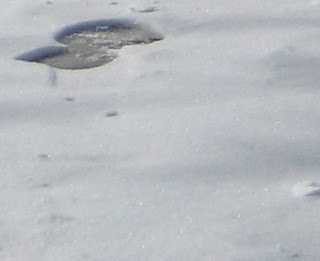 You don't want to hear what I'm about to tell you.

You'd rather just hate it, the last gasp of winter, the piles of flurries that fluster and blustered through the day.

By now, it's probably all gone anyway . . . all eight inches of it. 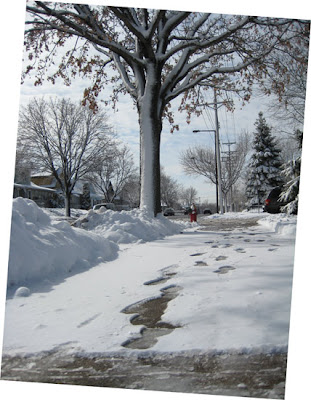 [Inalquit begins where snowshovels end. I am the third person to tread this path this morning.]
But it was good, this snow. Eskimos have two hundred words for snow, and one of them is "inalquit", which translates as "footprint snow".* Footprint snow is delicate and brittle, brief and slight, like a flower that blooms for only a morning or the smile on your face just now. It comes at the end of winter and the beginning of spring, and sits like an eggshell, a thin membrane of white surrounding new life.

Like sidewalk geographers, the inuit people have long appreciated footprint snow for its legibility, the way in which it settles on the street, forming a thin layer that stays just long enough on the ground to allow you to count pedestrians. 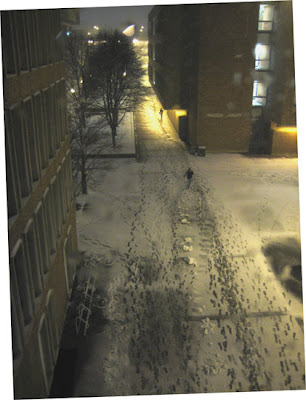 [Street as text, and the pattern of feetsteps. Dozens of feet, recorded on the blank white page. Feet in groups of two or three, following each other, the occasional lonely pathfinder venturing off and away.]

"How many people have walked down the road today?", you ask yourself.

You ask the footprint snow, and it tells you "seven." 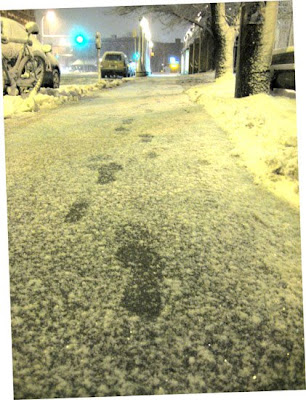 [Like shaking an etch-a-sketch, someone comes along and shovels the sidewalk, erasing all the little footstep lines traced in the white. But, eventually, the footprint snow falls again, and you leave a trace behind.]

Thank goodness for footprint snow, that falls underfoot and lasts for a day. Without it, we'd all be the lonelest of individuals, not knowing where our feet fall.

Spring will come. But until then, count the feetsteps and fooprints, and watch it melt away.


[One of the uses for footprint snow is to stalk little children with an axe.]
Posted by Bill Lindeke at 12:25 PM

jj23Well, what can I said? I hope you can still doing this amazing post, specially when you add . Unfortunately I don't have enough time to come across the blog and read each post that you done, by the way I couldn't hate anything from this initiative.