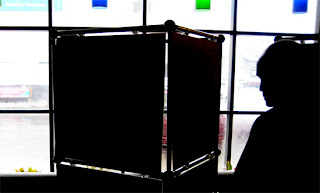 In honor of R.T. "Rootin Tootin" Rybak's well deserved accolade, I want to tell you about an event I happened across a few days ago: the (lengthily titled) Reweaving the Urban Fabric: Minneapolis Great City Design Teams / American Institute of Architects Minneapolis gala event at the Riverview Theater.

Honestly, I went there hoping to see a movie, but was pleasantly surprised to find a bunch of displays showing ideas for streetcorners (neighborhoods) in Minneapolis. The mayor had, some time ago, initiated a project to work with architects developing ideas about how to "vision" certain key streetcorners (neighborhoods) in Minneapolis, including a bunch on the South and East sides of downtown, in Northeast Minneapolis, along the Southern edge of the city, and one or two in North Minneapolis. Plus, the most extensive redesign vision was along Washington Avenue, which the mayor wants to see turned into a "boulevard" linking Cedar Riverside, Downtown, and the Near Northside areas. (The über-extensive powerpoint for that is here.)

[The future Washington Avenue Boulevard, with labels and red dots.]

The projects looked good, in that architect-y fantasy world kind of way with all the pretty full-grown trees and people and color. More importantly, they show that the city is symbolically invested in thinking about how neighborhoods are groomed and incubated.

One of the things I remember them talking about was the North Minneapolis location, pointing to how the park by the corner of Penn and Lowry Avenues was really separated from much of the neighborhood. They proposed a series of buildings that allowed pedestrian access through to the park, kind of like the "East Village" development in Elliot Park.

Of course, the rest of the projects looked nice, too, even though some seemed a little vague. But then, talk is cheap. And an architectural sketch is cheap AND expensive. What's not cheap is actually building any of these projects, and with the economy in the crapper that's going to take a long time. 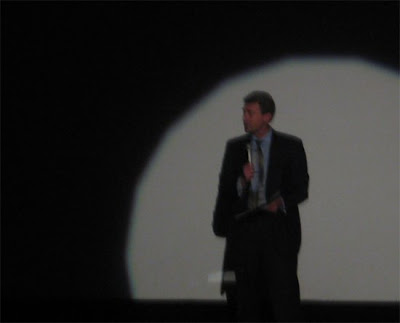 More importantly, though, the Great City project shows that the mayor has a good sense of priorities. He gave the keynote speech of the evening, an impassioned talk of the longterm history of Minneapolis that began with a story about riding the bus down 38th Street as a kid to see movies at the Riverview, the crush he had on a girl who worked at the corner joint, and how Minneapolis is lucky enough to have small neighborhood centers that stemmed from the streetcar days. Today, he argued, what we need is a "fine grained urban fabric" that doesn't depend on cars.

R.T. also mentioned that the kinds of architectural exercises developed by the AIA can be really useful, even if they never get past the page. He gave the example of the repositioned 35-W on-ramps that they're going to include in the new interstate bridge, which are being moved away from Washington Avenue and help catalyze the connection between Downtown and the Seven Corners area. That change, he said, would have never happened if not for the results from the Washington Avenue Boulevard charette.

It was really a great speech on public life and public space, and hizzoner threw the note-laden pages into the air after he read each one, clearly in his element and relishing the moment. And he ended with a defense of planning, saying that people often asked him why he spent so much time thinking about little details like sidewalks and parks when there were so many larger, more pressing problems at hand ... things like the war in Iraq, climate change, or deepening economic inequalities. He said that he tells those people to "connect the dots", that we're fighting a war for oil for our cars, that climate change is going to demand walkable streets and less intensive lifestyles, and that economic growth starts with strong neighborhoods. You could tell he really meant it when he said, "together, we're going to rebuild the American city."

[The post-applause gladhanding in the Riverview lobby, with the mayor at far right talking to the people through the teevee.]
Posted by Bill Lindeke at 1:04 PM

that last bit is the best. "connect the dots" ...i like that.