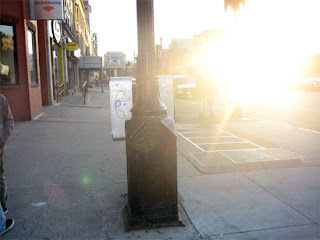 [The sunny sidewalks of Boston. Also, sorry about the crappy images later here, but my photos got messed up somehow.]

I spent all last week in beautiful Boston, Mass., attending the annual meeting of the Association of American Geographers. It's a huge gathering of about 7,000 academics who discuss a great variety of spatial structures and systems, including cities, social groups, forests, and regional economic and political development. Anyone who wants to can give a twenty minute talk there, and the result is a huge mass of "sessions", dozens of which go on simultaneously for eight hours for five straight days. Meanwhile, I had stepped from the last Minnesota snowstorm (I hope!) into the sunny springtime of Boston's Back Bay / Copley Square neighborhood, and it felt great to drink a beer on a sun drenched patio within sight of Fenway Park.

My part of the game was called "Marketing Community: Re-introducing Social Capital and New Urbanism in Minneapolis Greenfield Developments", and was a vague attempt to think about the how marketing and consumption of "new urbanist" developments in the Twin Cities differ so starkly from the theoretical debates surrounding new urbanism. In particularly, there is a large gap between consumers' and architects' ability to discuss social capital and infrastructure, the idea that social networks can be fostered or created by adding things like sidewalks, shops, parks, gazebos, or "community centers". (The paper was written for a class on suburbia taught by John Archer in Cultural Studies.)

[The view of the brand new street from one of the balconies in Burnsville's Heart of the City development.]
First, I toured a bunch of new condo developments in the Twin Cities last fall during the Parade of Homes, including a few places in the above development in Burnsville, two places in Maple Grove (Arbor Lakes, and a new development to the West), the CityWalk development in Woodbury, and the slightly-older Liberty on the Lake complex out West of Stillwater. They were all fascinating examples of the way that new urbanism is being adopted, to varying degrees, within the Twin Cities' suburbs, and each of them had different levels of community infrastructure.

The most extensively decked out burb-neighborhood was the one in Woodbury, where the "CityClub" community center had an indoor gym, club room, alcohol-free sports bar, pool tables, basketball court, “glass enclosed kids corner”, video rentals, outdoor patio, and a room in which one can play virtual golf. 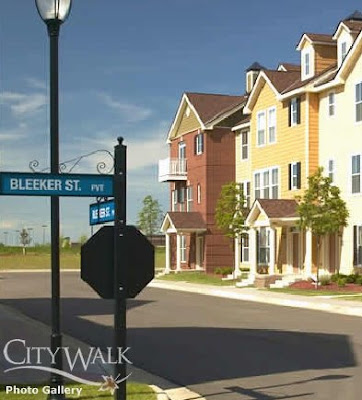 [One part of the CityWalk. Note the sign that says "Bleeker Street PVT" ... no contradiction there!]

I began by looking at how these places marketed themselves to consumers, particularly the way that they seemed to closely tie their collective infrastructural amenities to the idea of "urban lifestyle" and "developing community". For example, here's a typical bit of copy:

… an entirely new condominium experience… [with] all the conveniences for easy living … carefully designed to provide the resident with a complete array of recreation, restaurants, services, retail shops and office space,… [and] pulsing with the sophisticated integration of complete lifestyle choices. All right out your front door. 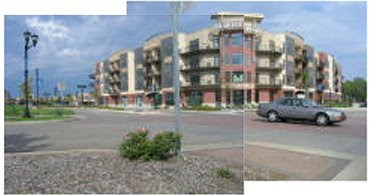 [The Park Crest development in Burnsville features a wine bar and coffee shop on the first floor, and faces a new city park and under-construction Performing Arts Center. Also, the realtor told me that the mayor lives there.]
For some some reason, while consumers find it easy to think about how these sorts of amenities foster strong ties, many of the academic, popular, and theoretical debates over whether or not new urbanism is good or bad seems to hinge on a discussions over aesthetics, social justice, or cultural signification. For example, in his recent book, Sprawl: A Compact History, Robert Bruegmann doesn't spend any time discussing the decline of social capital and how it might be tied to our urban landscapes (as Robert Putnam forcefully argues in his 2000 book, Bowling Alone). At the same time, Putnam doesn't really dwell on the urban landscape in his later work, nor does the Congress for New Urbanism make a point of talking about fostering social networks.

Anyway, my point was that it seems odd to me that social capital isn't more a part of the argument about why we might want to build certain kinds of neighborhoods. While the suburbs are littered with empty sidewalks that don't lead anywhere, the goal of developments like this should be to foster pedestrianism.

My guess is that one reason the new urbanist debate so often leads to people talking past each other about the color of paint on porches or "social engineering" might stem from architecture's long modernist legacy of treating form as art, rather than something that shapes human behavior. Andres Duany and Elizabeth Plater-Zyberk suggest as much in their famous 2000 book, Suburban Nation, making the odd declaration that:

Design affects behavior. Disputing this truism may seem silly, yet for some reason it is still a topic of heated debate at architecture schools. […] One does not have to believe that the front porches encourage sociability to accept that unwalkable streets discourage it.

It's weird to me that Duany and Plater-Zyberk have to make such a show of saying something seemingly so obvious. But, as I argued in the talk, once planners and citizens start to think about how social capital operates within communities, we can maybe start discussing the distinctions Putnam introduces between "bridging capital" and "bonding capital". The difference between these two types as Putnam more recently explains, is that one “bonds” similar groups members while the other “bridges” between dissimilar groups, and one of the problems with some of these neighborhoods is that while they might encourage bonding within members of the same (class-based) development / community, they really make forming bridging capital difficult. 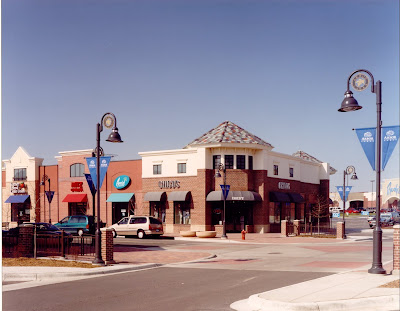 [Main Street in Maple Grove. Surely better than Southdale ... but who gets to walk here?]

For example, when I visited the CityWalk building in Woodbury, I found two signs posted adjacent to each other on the wall: one promoting a community-wide Halloween trick-or-treat event, the other warning residents to be wary of permitting outsiders to access the grounds. In a way, shared facilities within a development serve to reinforce identity boundaries, simultaneously including and excluding certain people along culturally determined lines.

In other words, the important thing to think about in these developements might not be whether or not they look or act a certain way (they are, after all delightfully easy to mock), but what kinds of connections they foster within and between different kinds of communities. And along those lines, the new Burnsville Heart of the City area struck me as by far the best. Instead of being controlled by one developer, it had a bunch of different styles of condo buildings, some of which were rental, and a little strip mall in the midst of the development that hosted a whole bunch of stuff people will actually use, like a chinese place, a Caribou, a cleaners, a food market, etc. That kind of mixed-use depends on having connections between different groups, which is anathema to many of these tightly controlled and often-isolated sidewalks.

Anyway, that's kind of the idea behind my talk in Boston, and when I get the audio file of my presentation maybe I'll put it up. Meanwhile, apparently summer has arrived! (stormsnall)

[The strip mall next to one of the condo buildings, which was having a "We've gone bankrupt! Everything must go!" sale on their condos.]
Posted by Bill Lindeke at 9:47 PM

I enjoyed reading this. I agree that of the developments you've listed, Burnsville HOTC is by far the most appealing.

Turn the slideshow into a Video, that way you can upload it to your blog and add your own recorded commentary :-D
Did anyone talk transit or HSR (High Speed Rail) and the relationship on land use or the need for more transit when you were there?