Public Character #6: Chester, who rode his bike, wore a tophat, drew cartoons, played the accordion, and lived under a bridge

The social structure of sidewalk life hangs partly on what can be called self-appointed public characters. A public character is anyone who is in frequent contact with a wide circle of people and who is sufficiently interested to make himself a public character. A public character need have no special talents or wisdom to full his function --although he often does. He just needs to be present, and there need to be enough of his counterparts. His main qualification is that he is public, that he talks to lots of different people.


Some years ago I was at the old Bedlam Theater on the Minneapolis' West Bank one evening. The Dreamland Places, one of my favorite bands, were playing one of their then-weekly Wednesday night sets, 20s and 30s cabaret vaudeville songs with an ever-changing cast of musicians.  It was one of the nights when the place was really filling up, and some friends and I had arrived early and grabbed a booth, sipping on wine, music, and pierogis.

I miss those days, the more so because of the cast of characters who were always buzzing around the place. The West Bank is Ground Zero for public characters in Minneapolis: the flower guy, Spider John, the folks who shuffle between Hard Times and Palmers, and the list goes on.

At some point Chester, a scruffy ubiquitous man in a top hat, sat down in the free chair at our booth. Nobody minded. In fact, we took it as a compliment. I'd seen him around in his threadbare suit hiding obvious health problems, and knew he was a sometime musician and not much else. Before too long, he took out a piece of paper, traded his unlit crumpled cigarette for a pencil, and began drawing something.

The music filled the room and eventually I turned to him and asked him, "Hey what are you drawing? Can I see?"

He turned over the paper and, it was like the scene in The Big Lebowski where Jeffrey scribbles on the notepad to find the hidden message. It was a picture of my friends sitting next to me above a banner that stated "Fuck You, You Baby Fucking Bastards."

When discussing so-called "public characters", I sometimes worry about "the Sesame Street effect", the idea that we sugar coat our expectations of urban life. Some stories can make cities seem almost too nice, as if the crazy diversity of people didn't really prickle up and create friction. Warm stories and friendly chatter is not a real city, despite Oscar the Grouch. We also need people like Chester, and his character Glimpi Dumbinski, who don't give a fuck what you think of them.

Chester died last week, and it's been revealing to read the stories that have come out about what he meant to people in the neighborhood, and even some of how his life history explained his predilection for the sky. He left some big (and surely shoddy) shoes to fill. 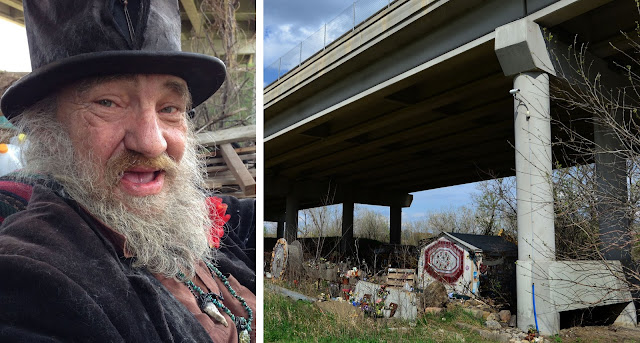