A joke for you.

A biker walks into a bar. He sits down and orders a beer, and then is yelled at because a City Council candidate was trolling neighbors about the "loss" of barely used parking spaces to increase safety for people riding bicycles.

OK, it's not funny, but it's what happens when David Glass is campaigning to stop bike lanes in Saint Paul.

At the time, his campaign manager was going up and down Front Avenue handing out fliers to neighbors trolling anti-bicycling sentiment, and had composed a statement about how "Imposing a suburban solution [sic] for a core city neighborhood that has had a presence of residents and businesses for the past two centuries is not well thought out [and] Front Avenue is not wide enough for bike lanes."

Well, it turns out that David Glass, proud owner of a giant settlement from the city when it ended the lease on his sub-par restaurant, proud recipient of 10 speeding tickets, has now released literature that proclaims him a Saint Paul bicycling supporter. 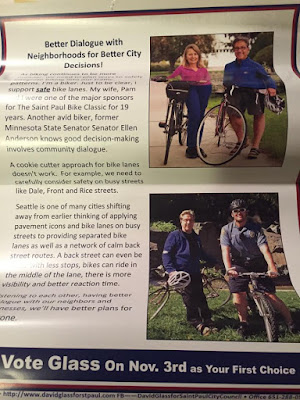 Here's a copy and a transcript:


As biking continues to be more popular, we need to plan ways to safely integrate biking into our traffic patterns. I'm a biker. Just to be clear, I support safe bike lanes. My wife, Pam and I were one of the major sponsors for the Saint Paul Bike Classic for 19 years. Another avid biker, former Minnesota State Senator Ellen Anderson knows good decision-making involves community dialogue.

A cookie cutter approach for bike lanes doesn't work. For example, we need to carefully consider safety on busy streets like Dale, Front and Rice streets.

Seattle is one of many cities shifting away from earlier thinking of applying pavement icons and bike lanes on busy streets to providing separated bike lanes as well as a network of calm back street routes. A back street can even be [obscured] with less stops, bikes can ride in the middle of the lane, there is more visibility and better reaction time.

Listening to each other, having better dialogue with our neighbors and [obscured].


The Saint Paul Bike Plan calls for a system of on-street bike lanes in addition to a network of off-street bicycle boulevards. You need to have both kinds of infrastructure to appeal to the wide variety of bicyclists that are out there. Bicyclists who want to move more quickly or patronize commercial areas need to be able to ride on main arterial roads. Bicyclists who want a calm, low-speed, low-stress experience will opt for bicycle bouelvards like the kinds that Glass alludes to. Boulevards, protected lanes, and on-street lanes work together, and support each other.

Glass's misleading flier is like when PRT advocates (a.k.a. "pod people") derail bona fide transit investments by blowing smoke about futuristic pipe dreams. And Glass's message epitomizes an increasingly prevalent pattern in Saint Paul of opposing safety improvements for safety reasons. For example, when people say that narrower travel lanes are more dangerous, it means they completely misunderstand the paradox of risk, and the role that speed plays in safe neighborhoods.

David Glass has become Saint Paul's answer to Rob Ford at this point. If he's elected, you can count more anti-bike mobs, more trolling for parking barking, and the inevitable unstriping of any progress bicyclists have made in the past few years.
Posted by Bill Lindeke at 8:20 AM