It’s not usual for these large metal machines to exist out of doors. They belong in beige hallways, airports, fluorescent cubicle nooks. But rarely somehow they escape, set up shop on the sidewalks to numbly lure passing strangers with Siren sugar. Let’s meet some of these rogue exposed mechanical pop purveyors. 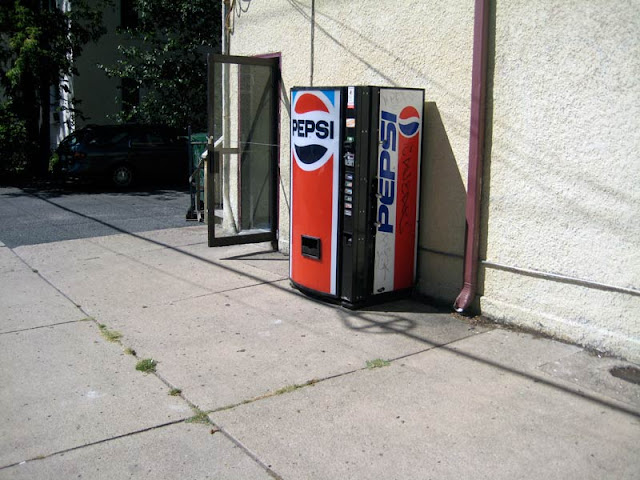 This one lurks outside a laundromat, as if guarding the back entrance. Nobody knows when it got out, but nobody has been able to talk it into going back in. As if it’s on an eternal smoke break, chatting with the rain gutter about how messed it got last weekend and how it plans on quitting its job at the laundromat ASAP.

In truth, it’s just an act. This pop machine is no rebel, and will be working at the South Minneapolis laundromat for years to come. And it’s not such a bad place to be, watching the traffic go by, hearing the bubble of Kingfield conversation, the sweet odor of drying clothes wafting by in the summertime.

It likes playing with the children. It enjoys the falling leaves in autumn. And in the wintertime, then the temperature outside is even colder than the temperature inside, it’s quite a relief to know that it can take it easy for a change. 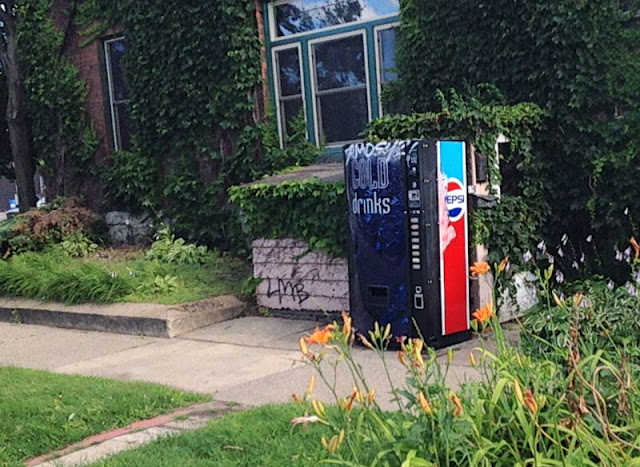 #2 - The Pepsi Machine on Myrtle Avenue

This pop machine is punk as fuck. It’s not even sporting logos on its front. It just says COLD DRINKS like a boss, with some graffiti tattoo’d around its neck for good measure.

It hangs out on the edge of the Midway, in the apartments between the industrial buildings that nobody knows about unless they’re cool. Even the ivy covered walls are a little out of control, out of sight and out of mind.

This pop machine in a punk band, though of course it’s pop-punk, which is still too pop-py for a lot of people’s tastes. Songs like, “Coke sucks”, “Drink me”, “Cold inside”, and their biggest hit, “So many bubbles rising up,” the chorus of which is pretty addicting once it gets stuck inside your head.

Sometimes this pop machine gets a little baked and starts talking about how beautiful flowers are for a long time. At that point, you’re better off just dumping out the rest of the can and finding something else to drink. 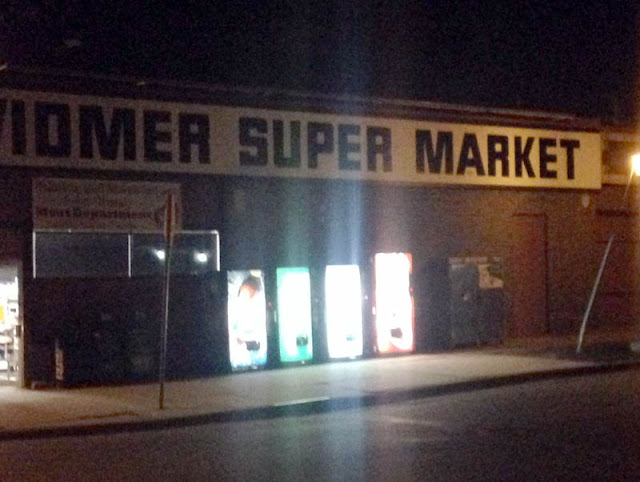 #3 - The four pop machines outside Widmer’s

These machines are old friends. They meet up every day on Saint Clair Avenue and hang out, passing time, sharing stories about real sugar or the days before aluminum. (Don’t even mention plastic bottles around these machines, or you’ll regret it. They can’t stop talking about it.)

These pop machines all went to high school together. They used to sing for fun, old pop songs of course, and they’re always talking about who’s driving down the street, who’s parking right now, and how the kids playing in the park across the street sure don’t look like they used to.

“For one thing, they’re so chubby! They need to get outside more often. When I was a young pop, we’d play all day.”

(If only they could connect the dots between their own unhealthy habits and the state of the world today.)

If you want to know the secret recipe, just hang out here for a few days. 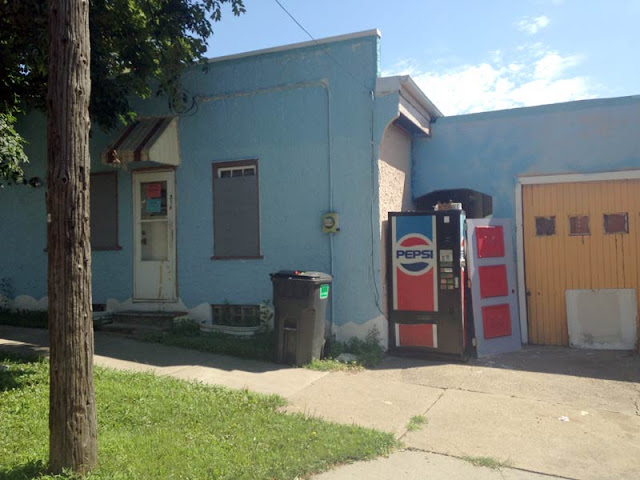 #4 - The Pepsi machine off Front Avenue

This pop machine lost its job a long time go. “You’re obsolete,” they said, and pretty much left it for scrap in Saint Paul’s North End. It was looking for work for a while, but nobody was interested.

“Your buttons are too big,” they said. “Where’s your dollar bill slot?” they asked.

Quarters work just fine, if you ask this pop machine.

These days, it hangs around an old house that it’s slowly fixing up, though “the city” keeps coming by to inspect whatever the hell it is they inspect. It likes listening to talk radio, often late into the night, just standing there in the entryway watching the sun go down over the railroad tracks.

Where’s that leak coming from? There’s nothing wrong with Pepsi. Who doesn’t like Pepsi? 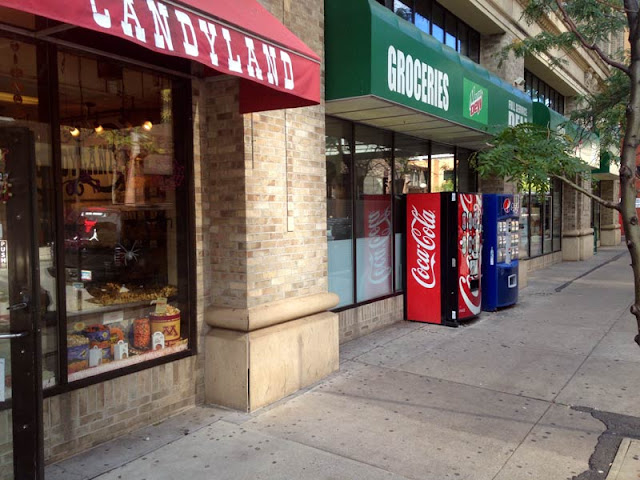 #5 - The Coke and Pepsi machines on Wabasha

They say “opposites attract,” and these two have been married for years. They’re out there on the street just about every day, greeting people or trying to attract customers. They’re very nice, as far as it goes, but most people don’t even make eye contact, just stare down at the their shoes and shuffle South.

The problem is that tastes are changing, and pop just isn’t what it used to be. Nobody wants all that fake sweetness.

Late at night, it’s a bit different, when the wind blows along the blank walls downtown, whipping its invisible weight, these machines just stand there holding hands, staring off at the empty streets.

Occasionally a bedraggled individual reaches into their coin slot, just to check for quarters.

The next day they do it again, when the office workers appear and their buttons seem to light up refreshed. If only they sold coffee. 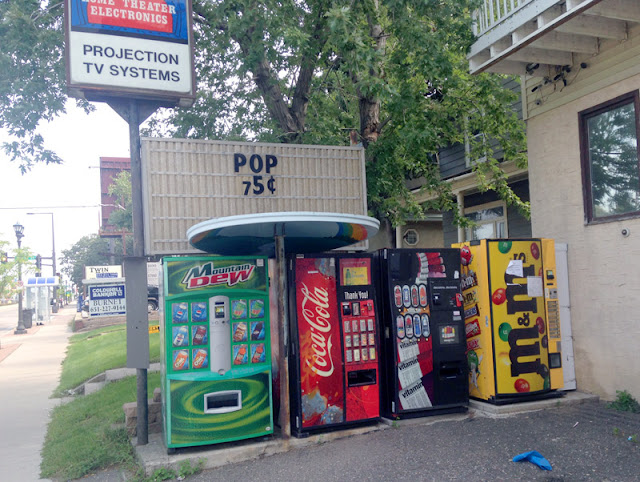 #6 - The pop machines on University

These pop machines had to raise their prices because of the Green Line. The peanut M&M machine doesn’t work any more. Everything’s going to hell.
Posted by Bill Lindeke at 9:27 AM

Gutters Direct is located in Plymouth, MN. We like to consider ourselves a company of vision and talent, who have a deep passion to be the absolute best at what we do. We thrive for knowledge and progression. We're interested in substance and not the superficial. Quality over quantity is our bottom line. Here are options for the minneapolis gutters, st.paul gutters, mn gutters, seamless gutters minneapolis, plymouth gutters, cheap gutters and twin cities gutters.

Sad to report that the vending machines located at Widmer's, 316/318 Front and the grocery store in downtown St. Paul on Wabasha are no longer present. I did find a few others though, as the old school grocery stores often have their vending machines located outdoors. So Cooper's at 633 7th Street W, and Bergen's at 48th and Cedar are two other locations that fit the bill.