Can Charles Avenue Climb the Ladder of Citizen Participation?

Let’s be honest. Most neighborhood meetings are pretty terrible. 90% of them are so boring that half the people are asleep, secretly texting, or staring fixedly at a crack in the paint on the wall. Anyone paying close attention is likely a wonky nerd (guilty!) able to display the love of detail typically reserved for scale model railroad aficionados or life-long accountants. (Not guilty!)

The other 10% of public meetings are so filled with rancor that the very oxygen gets pushed from the room and leaves everyone inside gasping for breath. When they’re over, rushing for the doorways is like fleeing from a burning Tea Party, everyone desperate to reach some sort of oxygen or common sense.

Public hearings are likely worse. They consist of, on the one hand, bored officials tapping pens on blank notebooks nodding while pretending to listen. On the other hand, you'll find dozens of angry people just starting to vent their spleens before being cut off repeatedly by someone with an aggressive stopwatch. This process can proceed for many hours, and because everyone knows that everyone else's opinions were decided far in advance, the process can become a dumb show where empty testimony is dutifully recorded into a public record, filed away, and forgotten. It's like a Harlem Globetrotters game, only if you replaced entertaining circus basketball with correcting spelling errors in old telephone books.

This problem is nothing new. Citizen participation has plagued city governments and planners for a long time. Back in the olden days, people didn’t even pretend to go through the motions. As anyone who’s ever read Caro's biography of Robert Moses knows, city governments used to do whatever they wanted regardless of public opinion. (Moses was famous for beginning projects with his teams of bulldozers before he’d even received official permission, because once you started an infrastructure project, say, by knocking down a garage or a tree. Once you did that, the project quickly became inevitable.) 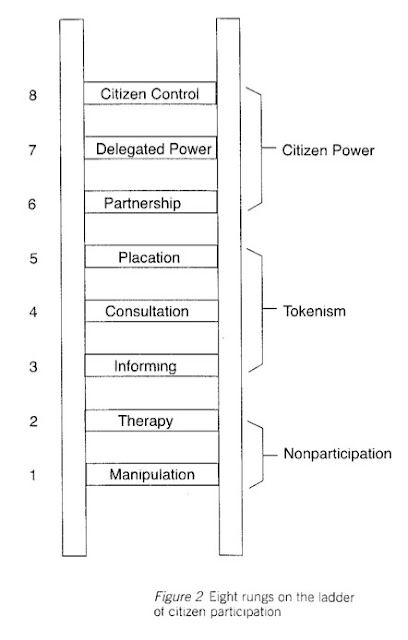 But just because you attempt something, doesn’t mean you accomplish it. Much citizen participation and public engagement does little other than inflame an already annoyed populace. There’s a famous 1969 essay by Sherry Arnstein, a social work theorist, that pretty well captures this sentiment. Arnstein’s essay outlines what she calls the “ladder of citizen participation,” and is a staple of most Planning 101 syllabuses.

Each of the ladder's “rungs” represents a different degree of citizen power. The bottom rungs – "manipulation" and "therapy" – are mostly attempts to pacify publics without even listening to their opinions. The middle rungs (where I’d argue many public processes exist) are only slight improvements. These levels – "informing", "consultation", and "placation" – are what Arnstein calls different forms of “tokenism.” People are heard, but “lack the power to insure that their views will be heeded by the powerful.” Finally at the top, Arstein outlines “real citizen power” where people participating with governments don’t just have voices, but have the ability to act and decide in accordance with those voices.

Moving up the ladder past tokenism and into the terrain of real citizen power is a real challenge for cities. Often, cities attempt this through delegating the job of public engagement to groups and institutions. That’s basically what Minneapolis did a few years ago with the Neighborhood Revitalization Program (NRP), where TIF funds were given to neighborhoods with few strings attached. One one hand, citizens really had power to make decisions. On the other hand, I feel the project was limited by the fact that neighborhood groups don’t represent their neighborhoods all that well. These groups are heavily weighted toward wealthier homeowners with lots of free time. Often, these kinds of conversations end up revolving around the preservation of property values at the expense of things that might serve less well-heeled citizens. (That could be one reason why Minneapolis didn't renew NRP for another round of funding, opting instead to keep the purse strings tied up in City Hall.)

So cities have to try other things. For the past year or so, one of those experiments has been taking place in St Paul’s Frogtown and Hamline-Midway neighborhood, just north of the ongoing light rail construction project along University Avenue. This project, called the Charles Avenue Friendly Streets Initiative, has a few noteworthy features. First, like many successful grassroots efforts, it wasn’t spearheaded or organized by the city. Instead, local urban design advocates wanted to get out ahead of the city’s official public process along a street designated for a “bike boulevard” traffic calming treatment. 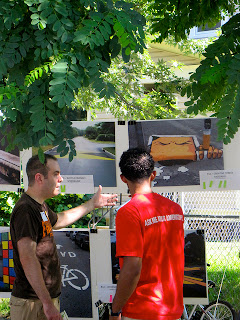 Second, the organizers didn’t rely on public meetings or media campaigns. Instead, they held a series of block parties along the corridor. They got permission from homeowners to close off the street for a few hours on a Friday, put out food donated from a local restaurant, and set up a bunch of activities based on the themes of public art, public space, and urban design.

As I understand it, the decision to use block parties as organizing tools was crucial because it overcame some significant spatial and temporal barriers to citizen participation. Instead of asking people to give up their free time, leave their homes, and go to a strange location for some unknown “meeting,” people could simply follow their noses out their front doors. Kids played in the street while parents looked at different alternatives for street design, asked questions, and discussed the city’s intentions and potential plans. The end result was a successful grant application for street designed around traffic calming, bicycling, and safe pedestrian access. 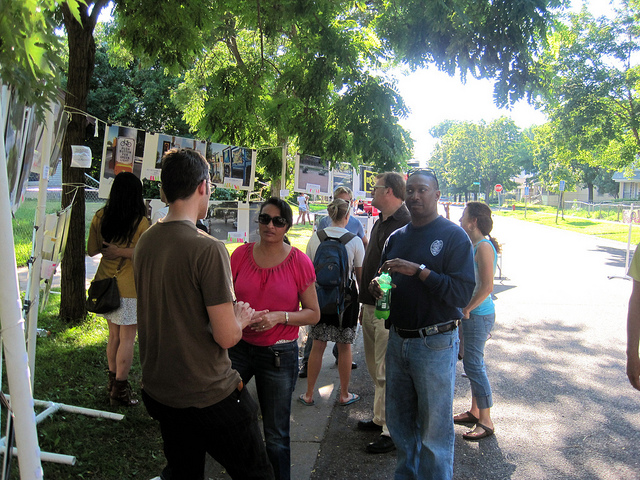 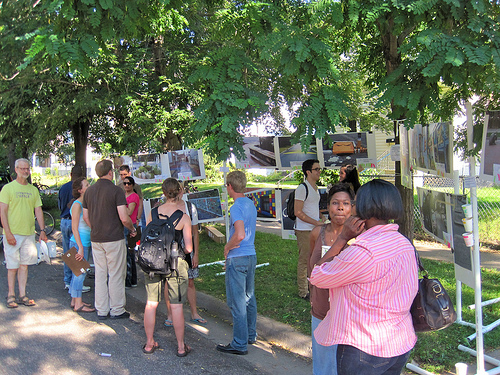 The success or failure of the project is still unclear. The first hurdle is that the plan has re-entered the official city process. It made the rounds in the newspaper, and raised the ire of a few business owners near Snelling Avenue, as well as voices in the media. The public comment period is still technically open, I think, at least if you email the planner in charge.

The city council is going to have an official public hearing on the project on Wednesday evening (tomorrow!), where they'll officially listen to people who come down to city hall and/or know how to use the internet and/or postal system. In a way, this project tests two public engagement processes against each other. The official plan comes out of the grassroots block parties, while the dissenting versions of the design express more traditional public engagement strategies. We’ll have to wait and see which form of citizen participation is better able to influence decisions.

In the meantime, the Charles Avenue project gives me hope that it’s possible for cities to do actual democratic engagement, to better reflect the desires of more people. This approach isn't perfect. It is really time consuming, and who knows whether it will bear fruit. But perhaps, on occasion, it suggests that we can leave tokenism behind and enter the realm of real citizen power. I hear the streets are friendlier there.