Are Minneapolis and St Paul Ready for The Cheapest Generation?

I tend to read my “back to the city” trend pieces with a great deal of salt. You know the kind I mean. A magazine or newspaper will pick up on some bit of urban culture, splat a condo or café on the cover, and say something like, “Are cities the new suburbs?” The piece will make various claims about a glowing urban future for the US of America, and say that “kids today” are leaving the suburbs behind and willingly riding the bus.

The problem with these kinds of articles is that they’re not really supported by reality. Sure, New York and San Francisco exist. And sure, there are new condos in most cities, in some important places. And of course, young people who live in cities are cool. (Guilty!)

But I’ve been reading about the return to the city for years, and in all that time, the vast majority of urban growth has continued to happen out in the suburbs. In all that time, the populations of most older US cities has grown (if at all) by only tiny percentages. (See this MPR piece, underwhelmingly titled, "Minneapolis and St Paul populations up slightly.") In a way, 'back to the city' narratives only help young urban professionals (YUPPIES!) feel more self-satisfied, while blinding them to the sprawling reality continually oozing past our beltways. It’s like a parlor trick. "Hey! Wow! Cities are bright and shiny and distracting," these magazines say. Meanwhile, culs-de-sac’d McMansions spread like an incurable infection, orbiting ever newer bigger boxes on the far asteroid belts of America. 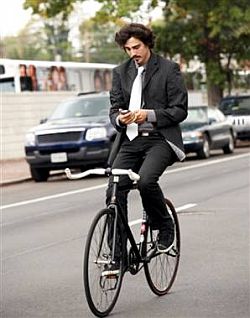 I mention this because I recently read one of these trendy tales, and I almost started believing it. As a cheap bastard, The Atlantic Monthly bit with the above title made me smile. It made me proud to be a so-called “millenial,” someone whose most valuable possessions are his laptop and his bicycle.

The piece, which you should read for yourself, attempts to make the case that kids today are more interested in bikes, smart phones, and urban living than in buying cars and houses. The authors include a few illustrative anecdotes, including an wonderful story of Detroit auto executives struggling to sell shiny new cars to young people entirely uninterested in them. As someone who has long loathed car commercials, reading this filled me with the kind of vindictive schadenfreude you can only buy in back alleys in East Berlin.

My hallucinatory high hit me like a flashmob. Visions of Amsterdam on the Mississippi flooded my eyeballs: bikes and cafés and downtowns without stoplights. A housing collective fantasy muffled my brain like an Ikea pillow. Artist lofts were flying threw the air in exactly the way that bricks don’t. I slumped into my chair, and my head hit my stack of architecture books. A dark pool of détournement opened up before me, and I jumped in.

I don’t know how long I was out. My cat woke me when it sneezed all over my face. Rem Koolhaas was covered in drool. As I wiped the feline snot from my cheek, I realized my triumph was but a fantasy. I looked around and saw that I was back in St Paul, and the suburbs were all around me, their immense atomized population and purple political clout stretching past the horizon. I was alone.

My eyes returned to the Atlantic article before me, and I scoured it for any actual statistical data. As it turned out, most of the “trends” in the piece were tied to the current economic recession. The only pre-recession statistic had to do with teen driving: “Even the proportion of teenagers with a license fell, by 28 percent, between 1998 and 2008.” The rest of the article was either a stat about the bad economy, or an anecdote about a realtor, a car commercial, or the growth of Zipcar. With a sigh, I resumed my normal pose, a Quixotic urban defensive posture that vaguely resembles beginner-level epée fencing.

Still, maybe there is hope. The post-housing bubble landscape is decidedly different. Gas is expensive. Almost everyone I know has massive loans. Does it really matter if young people aren’t buying cars because they don’t want to, or because they can’t afford it? (Today's front page Star Tribune report, "slow economy puts young lives on hold," is yet another example of this change, except that instead of "lives" it should read, "car and home purchases.")

Maybe it doesn’t matter in the end. There are fundamental changes afoot, and it makes no difference whether they’re driven by a smart phone fetish or a Visa bill. (It’s like asking the proverbial David Brooksian question about whether people buy American-dream large suburban homes because they really like them, or because that’s the only choice.) It's a chicken and an egg, a complex entanglement of individual and society. Our economic landscape largely determines which social trends can emerge. It provides the kinds of potential freedoms that evolve into desire. And we shape our economy by continually re-making the patterns of everyday life.  If our 20th century mode of living has become too expensive to continue, then both our culture and our economy need to change.

Barring the emergence of another magical money-printing, subprime-loan-addled housing bubble, we I doubt we'll return to the ‘everyone buy a house’ era anytime soon. And frankly, that's a relief because the new, less auto-centric future bodes well for our core cities. Kids today today want walkable, bikeable, busable, rentable places where they can lead cheap lifestyles. They want apartments in neighborhoods with lots of people around them, places that correspond better to an uncertain economy and a short-term career than a three-car garage with a 30-year mortgage out on the edge of town. And despite the best efforts of new urbanists, the only places where you’re going to find that kind of environment is in our core cities, places like Minneapolis and St Paul proper (and OK, maybe Richfield). You need cities with street grids and sidewalks and working transit and mixed-use neighborhood corners. Sorry Golden Valley.

There’s only one problem. Our core cities don’t seem to be too excited about kids today. Time after time, St Paul and Minneapolis drag their heels into their young urban future. Examples of local neighborhood groups waging successful battles against density or bikes fill my memory like Easter Island moai. A truncated list includes St Paul bike boulevards, which were the scene of protracted battles resembling The Somme. A very reasonable condo project in Linden Hills bit the dust. Density along the LRT line is met with frowns. The west end of Grand Avenue is on its way to being cryogenically frozen like Walt Disney's corpse. Sidewalk cafés are a scourge. The list goes on and on.


“Hey kid, get off my lawn,” our cities seem to be yelling while clutching a plastic rake and slowly shaking a pale fist.

[Clint Eastwood is a raving loony.]


I don’t want to say that all of these neighbor concerns are wrong. They’re people’s actual opinions, and cities should respect them. Nimbys are people too. Sure, I might try to convince you that you're wrong about density and parking and liquor stores and patios and sidewalks... but I'm not going to take away your right to vote or anything.

Maybe the problem is more about process. There was a Minnpost article recently about the composition of city commissions in Minneapolis. For these groups:


In Minneapolis, about 50 percent of the households are rental, yet nearly 90 percent of those serving on boards and commissions are homeowners.

Another measure of diversity is seen in income levels. The median household income in Minneapolis is $46,508 a year. About 20 percent of current members have household incomes at or below that median, with the remaining 80 percent above the median.


I think it’s safe to say that whatever the unrepresentative composition of these appointed committees, it’s probably worse in the local neighborhood groups. (See for example, largely fruitless efforts by U of MN students to get involved in the Marcy-Holmes neighborhood association.)

That’s the problem in a nutshell. If everyone involved in planning processes are home owners, but half the city is renting, what kinds of bias are we dealing with? What kinds of assumptions are cities making about "quality of life," or the need for parking, or density?

Young people, and renters in general (e.g. poor people, people of color, people with families, anyone who doesn't speak English) are not part of the process. Their voices aren’t heard at city hall, and for any debate about a new project the voices of homeowners easily drown out anyone else. It means that anytime there’s a debate about density or sidewalk cafés or better transit, you’re playing with a loaded deck. One side of the conversation gets a microphone, a PA system, and a professional audio technician; the other side is sick in bed with laryngitis and a slight hangover.

Maybe we need to have spots on city commissions and neighborhood groups reserved for renters, affirmative-action style. Maybe we need a YIMBY app. I’d like to see Minneapolis and St Paul reach out more to young people on the internet and on the streets. I’d like to see more ‘block party’ organizing, where we bring city conversations to streets instead of the other way around. We need to enroll public artists in brainstorming, and cities need to value this kind of input just as much as they value irate comments at a community meeting.

That’s why I get excited about things like placemaking, public art, or the upcoming Park(ing) day. (It's tomorrow!) It’s not just because art is cool, or because I like sidewalks. It’s because these kinds of efforts address a huge problem in our public process, in our urban democracy. They allow us to plan and experience cities in a way that isn’t just about maintaining lawn and order. They tap into desire for vital, vibrant urban space filled with people and activity and uncertainty and (yes) free wireless internet. Like it or not, the future will be cheap.

This whole conversation reminds me of Portland: where young people go to retire.
Posted by Bill Lindeke at 10:23 AM

Don't worry, it will change when the old people die. Of course, by then we will be 50 and fighting to defend our cities agains whatever generation was born while we were in high school. Gah, those kids and their hover skateboard! 'Twas ever thus.

Why should renters have as much say? We've all been renters, but I no longe relive where I'd rented. My prior neighborhoods shouldn't be hobbled by whatever dumb ideas I had when I was a young dumb renter. Renters tend to be more transient. As such, their opinions should matter less. I'd rather hear the opinions of their landlords who have more "skin in the game".

Young people driving less isn't just because of the recession. Comparing the National Household Transportation Survey for 16-34-year-olds in 2009 to 2001, leaves these interesting factoids:
--driving among all young people was down 23% while transit was up 40%, biking 24%, and walking 16%.
--Those young people who lived in households with annual incomes of over $70,000 increased their use of public transit by 100 percent, biking by 122 percent, and walking by 37 percent. So even MORE--a lot more!
--The average young person with a job in 2009 drove 16 percent less than the average young person with a job in 2001.

But, overall, your point is well taken.