Newspapers Should Stop Framing the Victim on Design Issues

This might be like berating a lead horse but, particularly during the recent rash of bicycle and pedestrian accidents, I’ve grown frustrated with how our local newspapers report on transportation issues. A great example is the terrible tragedy earlier this month in Ramsey, two elderly people trying to cross Highway 10 were killed by an automobile driver.

I don’t want to unnecessarily pick on reporters, because they're overworked and underpaid and overworked. But the way this story was reported in the Star Tribune put the focus and blame on the victim:


The two pedestrians struck and killed Saturday night at an intersection in Ramsey were identified Sunday as a Texas couple in their 70s.

John and Jean Nettelfield, 78 and 71, respectively, of San Antonio, were hit by a sport-utility vehicle and killed while trying to cross Hwy. 10 against a red light Saturday night, according to the State Patrol.

Then the story starts to mention alcohol. Invariably, when you read an article about a bike or pedestrian accident, the article implies (overtly or implicitly) that the victims were culpable, intoxicated, or guilty of breaking a law.

In this case, the paper offered a correction to an earlier report that had implied that the two elderly tourists were drunk. It turns out, they were just old and from Texas:


Earlier reports that alcohol had been detected in the Nettelfields were incorrect, the State Patrol said on Sunday.

Lt. Eric Roeske, spokesman for the State Patrol, said alcohol was not a factor in any way for anyone involved in the accident, which happened shortly after 9:30 p.m. at the intersection of Hwy. 10 and Sunfish Lake Boulevard, according to the patrol.

The SUV was eastbound on Hwy. 10 and had the green light when it hit the pair, authorities said. The driver, Cheryl Knoblauch, 34, of Ramsey, was not injured.

A second vehicle, a passenger car, also was involved, striking one of the victims lying in the road after the first impact.

The driver of that vehicle, Ashley Rohwer, 27, of Andover, was not injured, either. Alcohol was not detected in either driver.

The pedestrians were pronounced dead at the scene.

Ideally, when tragedies like this happen, journalists ought to mention the role that road design plays in these accidents. Highway 10 in Ramsey is an incredibly busy freeway that’s almost impossible to cross. The place where the couple was run over has a hotel on one side and businesses on the other. Mentioning the lack of pedestrian medians or crosswalks, or the fact that people on foot are required to walk far out of their way to cross at a signalized intersection, or at least bringing up the rash of people being run over by cars would add a lot to a story like this. That’s the kind of context we need.

These cases don’t always have to be just about accident reports, either. The Star Tribune dropped the ball twice this month while reporting on the Park and Portland redesign issue. Otherwise sensible reporter, Steve Brandt, wrote two different articles on the redesign, both of which minimized the benefits of the plan for the neighborhood while over-emphasizing the inconvenience to drivers.

For example, Brandt’s piece on the public meeting on the Park and Portland avenue redesign didn’t fit with reports I heard about the meeting. The way he reports the story, it seems like a political battle between bicyclists and automobile drivers. The lede begins thus:


Opinions on restriping Portland and Park Avenues in Minneapolis to shrink the number of car lanes and give more space to bikes ran the gamut from praise to putdowns at a public meeting attended by more than 100 people Thursday night.


"Who thought of this? Do they live in the city?" asked Monica Horning, a Bryant neighborhood resident opposed to the plan that would narrow the roadways from three traffic lanes to two and drop the speed limit from 35 to 30 miles per hour.

Attendees that I've talked to report a far more nuanced and positive discussion between cyclists, neighborhood residents, and others with concerns about safety.

The more recent report on the details of road construction is only a slight improvement. The subtitle reads, “expect delays as the streets get shaved, repaved and restriped to improve cyclist safety.” That’s true, as far it goes, but it seemingly attempts to frame this story as a battle between motorists and cyclists, as if any improvements for cyclists come at the expense of car drivers.

This framing is misleading for at least two reasons.

First, the issue isn’t simply cyclist safety. A redesign of these streets will be safer for cyclists, pedestrians, and auto drivers. Park and Portland are badly designed for their neighborhoods. These are high-speed running through dense residential neighborhoods with a lot of children. Slowing the traffic down, reducing the number lanes, and calming traffic will improve things for everyone, particularly the most vulnerable (read: run-over-able) people. The new design will even make it safer for car drivers without really impacting the overall traffic volume of the street. It’s not a matter of bikes vs. cars. It’s a win-win-win situation, where everyone is better off.

Secondly, the current design is out-of-date and unnecessary. Brandt must not have been paying much attention at the meeting, because any traffic engineer would tell you that three lanes of one-way 40mph traffic on these streets is unwarranted. (“Unwarranted” is the traffic engineering term for “stupid.”) These streets were designed back in the 60s during the construction of Interstate 35-W, and in 2012 they’re obsolete.

Reading article after article where newspapers attempt to frame design debates into a “war on cars” is frustrating. It’s chum for the comment threads, driving traffic from the crucial “road rage” demographic. It’s also lazy journalism.

Whether its reporting on a bicycle accident in Dinkytown, a car running over an elderly couple in Anoka, or a re-designed street in South Minneapolis, our local press can do better. Reporting should not be a matter of blaming the driver or blaming the victim. Everything’s not a battle between nerdy bicyclists and angry drivers. Ideally, journalism looks at the bigger picture. We need to think about these problems in a way that allows us to see the alternatives, allows our imaginations to grapple with different priorities for our cities. Should we live in neighborhoods where you don’t have to be young and athletic to cross the street? Should bicyclists be able to listen to music and talk to a friend while they ride to class? Should children be able to walk to school?

As our metro boomers age, they’ll grow slower and easier to run over. These will grow in importance like a semi in the rear view mirror. We don’t want Minnesota to become the next Florida, where old people are run down at rates typically reserved for roadkill. (There was a recent incident there where a mother was charged with vehicular homicide for attempting to cross the street with her child from a bus stop to her apartment.) I’d like to see our journalists begin to mention street design as a factor in stories about traffic changes and pedestrian accidents. This really is the least we can do to honor the dead.

I guess it could always be worse. Witness this recent front page media frame from the DC Examiner: 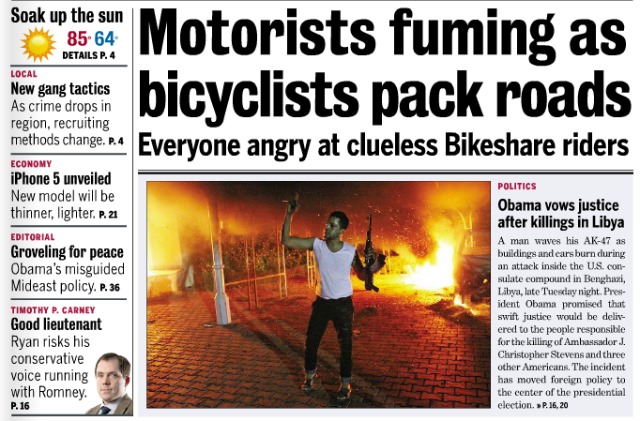 Bill! Thank you for writing this. I've been waiting for someone to say this. The reporting of these issues is upsetting. The unnecessary deaths are even worse, and make me upset. Again, thanks for writing this. I'm going to Tweet it and post it on Facebook. Best -Nate

One more problem with the Park & Portland subhead: it implies that driving delays are due to the redesign for safety. In truth, the repaving had been scheduled for a long time, to replace old, failing asphalt. The redesign involves putting paint in different places on the new asphalt, which takes no more time than putting paint in the same places. If they hadn't done the redesign, you'd still see the same delays.

Being generous, maybe it was a poorly-considered attempt to cram both pieces of useful information ("expect delays" and "improve [cyclist] safety") into a small space. But whatever the intent, it still unnecessarily fuels the cars-vs-bikes fire.

(I rode on the repaved-but-not-yet-restriped Park Avenue the other day. Riding a bike on that busy street with no lane markings at all is fundamentally weird - I didn't even know which side to ride on! Hope the paint comes fast.)