The Case of Bikes V. Cars 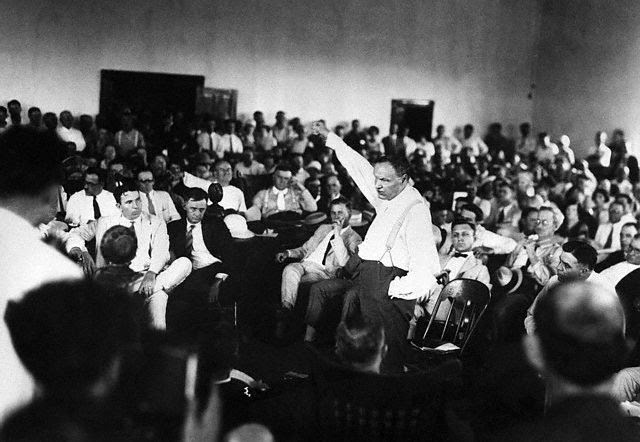 [How old is this debate? Here's a file photo of Clarence Darrow arguing "that bicycles should obeyeth all traffic laws or else suffereth the consequences."]
There are only a few things on MnSpeak that are guaranteed to spark a good (but very predictable) debate, and the ol' Bike V. Car Debate is one of the best. This recent post by a local bike infraction-obsessed blogger rekindled the fire.

People on either side of the issue have good arguments. The 'bikes are cars' group, clearly frustrated by unpredictable lawlessness, argues that bikes should obey all traffic laws (just like cars do?), if they want to be treated with equal respect and deference on city streets. Here's an example from Sxoidmal during yesterday's conversation:

It's not an analogy. Bicycles are a part of traffic, regardless of your opinion, and your rationalization will not hold up in court. Take some time to carefully read MN Statutes 169.18, 169.19, and 169.222 to learn what your responsibilities (and rights) are. The fact that cars have the capacity for greater destructive force does not alleviate cyclist responsibility. However, you're right about the trip plates: after hours, when the traffic lights change from timed cycles to weight sensors, this can be a real nuisance for cyclists, and the answer to that is improved cyclist infrastructure. City planners need to be made aware of this legitimate concern.

And then there's the other side, represented by JeffK, which is adamant that bicycles are not cars, cannot kill people, and shouldn't be treated the same way.

No. The analogy between bikes and cars is absolutely false, it's tired, it needs to die. Seriously. Your ability to injure another person when you're operating a bike is about a billionth of your ability in a car. This is why 99% of the population will walk across the street without a signal in this situation - because if somehow a car appeared out of the blue, only they can get hurt. Insurance companies, masters of statistics, know this: this is why it's peanuts to buy liability insurance for a motorcycle. Then there's the practical matter of bikes not tripping the sensors in the road to change the light.

I find myself making a similar argument once in a while, whenever (usually older) people complain to me about how cyclists break the laws by rolling through stop signs, etc.

I'm not exaggerating when I say that about half the time, when I stop my bike at a stop sign and wait for a car to go in front of me, they wait for me and wave me through. The other half the time they drive through in front of me after an extra-long pause.

My personal rules about cycling in the T.C. are something like this:

I developed this through a process of trial and error (and a number of close calls), seeing what works and what is expected of cyclists around town. Most of my friends have rules that are very similar to this. I might know maybe one person who always waits at every stoplight, no matter how deserted it may be, but I doubt it.

But the problem is that the rules here are so different from what is 'officially' expected of bicycles as they go around town. As Tom Vanderbilt points out in his book, the actual rules of traffic are something that emerges socially from the daily interactions of people sharing space on the street. We take it as a given that cars can go 5 - 10 mph over the speed limit on highways, even though that's technically illegal. (That number is quite a bit higher on the East Coast.) It's common practice to speed up to catch a yellow light, even though that is technically illegal. It should be (and sometimes is) illegal to text or mess with a cell phone while driving (or apply makeup or eat a complicated sandwich or tie your shoes, etc.), but people do this all the time. Jaywalking is illegal, but unenforceable and unenforced. Perhaps bike laws (such as the ones suggested by Mpls legislator Phyllis Kahn) that are more in line with how both bicycles and auto drivers actually behave, may be a good idea. 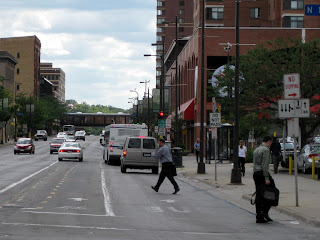 [As Small Laws points out, dozens of laws are being broken in this photo. Can you spot them all?]
Twin Cities' streets are not designed to treat bicycles and cars equally. Streets are almost universally designed to make life easy for motorists, while bike infrastructure is about as rare as a Minnesota roundabout.

I was reading a study about different approaches to making cycling safer in US cities, and there are a lot of things that cities can do to create safe conditions for cyclists. The list includes bike-focused streets, separated bike lanes, "bike boxes" at the front of intersections, and special traffic signals for cyclists. The report quotes a study, that showed that, once a separate "scramble" signal for cyclists was installed at a stoplight intersection in Portland, cyclists started obeying the traffic laws in very high numbers.

The results indicated that the volume of cyclists using the intersection increased and the amount of illegal crossings significantly decreased after the scramble signal was installed. Specifically, 78.1% of all cyclists passing the intersection before the signal change did so illegally, while after the signal was installed, only 4.2% of cyclists made an illegal crossing.

That's a pretty big change. The current problem, and one of the reasons that the Small Laws blogger will have no shortage of material, is that Twin Cities' bicycling laws and infrastructure are out of whack with how both cyclists and car drivers expect each other to behave. The new bike boulevard in Saint Paul and the new bike boxes in Downtown Minneapolis are good starts toward bringing actual cycling behavior more in line with the ideal world of transportation planners and lawmakers.

Meanwhile, I'm going to keep riding through deserted stop signs, having awkward moments interacting with cars in the neighborhood, and occasionally having near-death experiences as giant red Chevy Suburbans turn onto Lexington right in front of me while I'm in my bike lane on Como Avenue until I scream at them twice and they finally stop before running over my leg and ruining my only means of transportation.


[A report on a recent Bike V. Car fiasco in Toronto, Ontario, involving a high-ranking politician and a bike messenger who was killed.]
Posted by Bill Lindeke at 6:49 AM

Side note: sxoidmal is the author of Small Laws, and that is me, the "infraction-obsessed blogger." Hi!

This philosophy, "My personal rules about cycling in the T.C.," is exactly why Small Laws came into being: motorists, cyclists, and pedestrians have decided on their own personal rules of conduct, in defiance of established traffic law. They decided some laws are too small for them to observe. (There's an apt G.K. Chesterton quote that paints the other side of this coin.)

Can you imagine why a couple thousand people independently deciding on their own personal rules and interacting with each other (sometimes with great mass and velocity) might not be conducive to a safe environment?

My personal rules are almost exactly the same, except I always defer right of way to whoever's it is, even if they try to wave me through.

And I always wait for the road to clear in places like the Greenway crossing 26th -- it's way easier to just wait until everyone's out of the way than try to manage four lanes of traffic, some of which wants to stop and some of which doesn't and all of which has unknown impatience levels.

Also, get a mirror. It makes a huge difference. I have a Take-A-Look mirror and can strongly endorse it.

I have a slightly different set of rules, based on 20 years of experience and several run-ins with cars, none of which were caused by me. My rule is safety first and I assign very little importance to what drivers think of me. My fundamental rule is to maintain as much separation from cars at all times as possible. If the light is red, no one is coming on the cross streets, and a car is coming behind me, I run it just to maximize my separation from the car behind. If there's a car behind me as I approach a stop sign, I will also run that to maintain maximum separation (if I can do so without taking right-of-way from the other intersection approaches. My reasoning is that a car can't hit you if it can't get close to you. My rule doesn't lend itself to many hard-and-fast rules. Sometimes I stop or wave cars on when I might technically have the right of way. For instance, if I am approaching an intersection where there's a stop sign on the cross street but a car just pulling up to the stop sign to my right is about to turn right, into what would be my lane. No use passing right in front of their grill only to have them pass me 20 yards later as they accelerate away from their turn. I don't recommend my methods to everyone, but I have tried everything, including rigid obediance to the letter and spriti of all traffic laws, and my current method produces the fewest close calls, and I've had no accidents with it. When I rode to the letter of the law, I got doored, smacked-into by an unsignalled right turn, and yelled at and spit on by motorists overtaking after an intersection. What I've learned is that in order for a car to hit me, it has to get close to me first. So I keep away. until the roads are designed for cyclists, there's no set of rules that will uniformly produce good outcomes for car-bike road sharing. So I try to maintain the maximum separation I can.

While our roads still have a long way to go (especially North - South across St. Paul) we're making some progress. But it's still critical to consider the bikeability of a neighborhood before deciding to live there.

I visited this blog first time and found it very interesting and informative.. Keep up the good

Nice stuff! This case will never going to end.