Death by a Thousand Curb Cuts 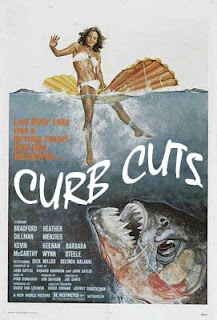 They're so common, that you hardly notice them any more. But they're everywhere. Lurking on our sidewalks, between our buildings, and surrounding our fast food restaurants. They prey on our walkable spaces, clinging like barnacles to a rusty waterline. They are curb cuts, and they're all around you. Look out below!

Yes, walking down the sidewalk isn't as simple as it seems. For one thing, there are many different kinds of sidewalks, with different sets of expectations. There's a big difference, for example, between walking down the pedestrian-oriented spaces of Nicollet Mall and the auto-oriented parking garage-laden sidewalks of Marquette or 8th St in Downtown Minneapolis. One of the major differences is that, on auto-centric 8th Street, pedestrians can be attacked at any moment by a curb-cut driveway. One second you're walking peacefully. The next moment, a klaxon blares "Caution! Car approaching!" and a large SUV barrels out of a dark parking ramp into the bright sun of the city sidewalk, striking without warning, feasting on its sidewalk prey. 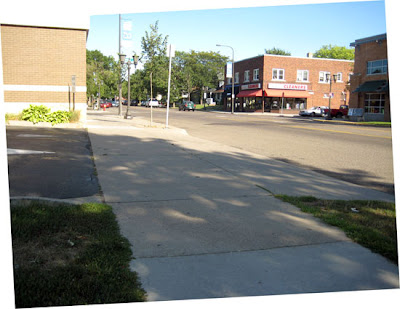 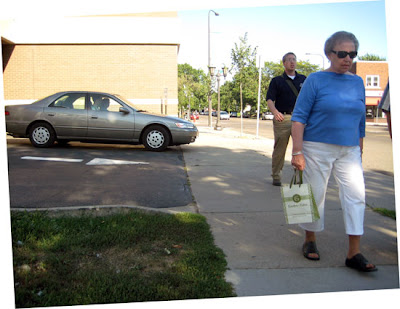 [Here, an older couple and a shoulder bag'd walker cautiously cross in front of the lurking Toyota...] 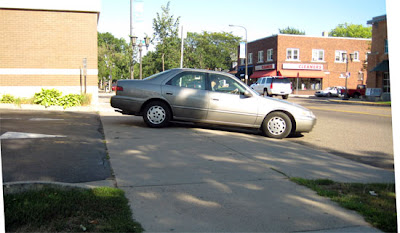 [... which menacingly strikes, just missing its desired prey. Curb cuts like to feast on the young and the elderly.]

I was thinking about this the other day when I was going to my bank, watching the interaction between the drive-through window and the well-people'd sidewalks of Grand Avenue. It seems like a very precarious situation: on the one hand, cars crawling three abreast through the pneumatic-tubed drive-in lanes; on the other hand, walkers and elderly people and baby carriages and bicycles and strolling shoppers walking directly in front of these cars, tempting the curb-cut predators with their tender, juicy pedestrian bodies. Even if there are no accidents, its certainly an inconvenience for Grand Avenue street life.

I sat by the bank drive-through window and watched cars go out and drive over the sidewalk for a little while. It was interesting to see how careful different drivers were about watching for pedestrians, and how careful pedestrians were about watching for people. After seeing a dozen or so interactions, it seemed to me that the people proved to be far more cautious. (The laws of physics suggest this is a good approach.) People walk gently into that good bank drive-through curb cut. 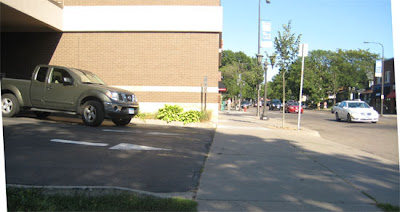 [A pickup truck lurks behind a corner curb cut, waiting to pounce on its next pedestrian victim.] 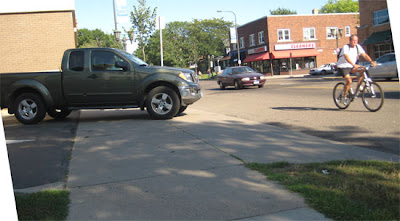 [All at once, it catches sight of its prey: the helmet-less cyclist, the Gazelle of Grand Avenue. Only the speed of this noble animal allows it to escape the curb cuts' strike...] 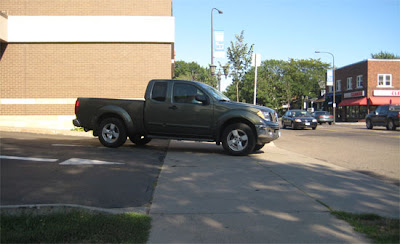 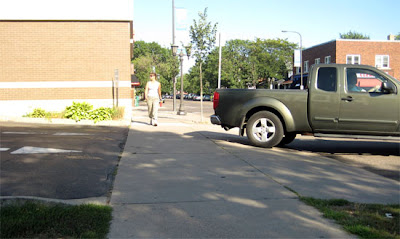 [The pickup truck moves on, as another pedestrian warily approaches the curb cut, watching for drive-through cars. The cycle of nature repeats again.]

We take curb cuts for granted. Adding one in on the street doesn't seem to make much of a change, and apparently makes it more profitable or something for a business (like a bank, or a fast food place, or a parking lot for a business) to operate in the middle of the city. At first, one curb cut drive-in seems like a good pedestrian/auto compromise. But then you add one more, and one more, and eventually, you can barely walk down the street without a car pulling into or out of a parking lot or drive-in lane. Not only is the street itself completely dominated by cars, but after enough of these auto-curb cuts, even the sidewalk becomes a space for cars to drive on and park. Eventually, after enough of these drive-in spaces are created and zoned, there is precious little safe, secure, and pedestrian space left in the city.

Most Twin City sidewalks have worked out a precarious compromise, allowing curb cut predators and pedestrians to somewhat anxiously co-exist. I can only hope that our sidewalks can survive the many tiny little bites of curb cuts, as they prey on sidewalks, taking tiny little bites out of the streets for people. Be cautious, Twin Cities! Walk with care!

[Some of the many curb cuts that lurk on our Twin City Sidewalks. (Click to enlarge.)]
Posted by Bill Lindeke at 9:23 AM

"...even the sidewalk becomes a space for cars to drive..."

This is excellent! We have an ongoing dialog about access management in our busiest area.

It will be very interesting to find the percentage of sidewalk that is actually shared by ped and motor vehicle.

I enjoy the fast food restaurants with drive-thrus adjacent to the pedestrian exits.

Better re-think that second Big Mac lest you be unable to amble away from the hungry drive-thru destined driver lurking outside the door.

We too recently had a young bicycle rider trapped under an SUV for half an hour... life-changing burns and broken bones ... I'd never thought of those places as "curb cuts." Hmmm....

Yeah, I'm not sure about the actual nomenclature. But whatever you want to call them, they're not quite sidewalks.

Thanks for your article, really useful information.