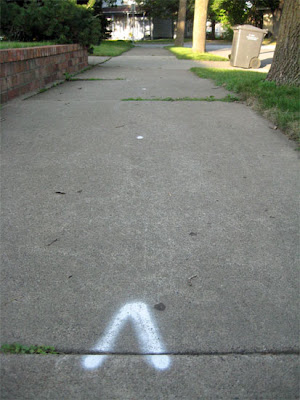 [Markings appeared on the sidewalks, little drips of paint. Apparently there was something wrong with this slab.] 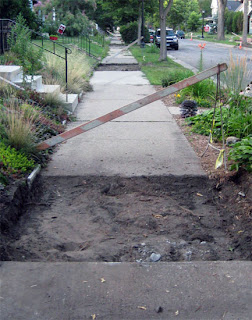 A while back these little white arrows started appearing on the sidewalks in Northeast Minneapolis. Little arrows on the concrete, little dots of white paint appearing every once in a while as you walked down the block.

These kinds of markings often crop up on the streets, some sort of mysterious code, engineering graffiti, colorful kinds of signs turning the streets into a hierogryphic palimpsest. But you rarely, almost never, see these markings on the sidewalks. Sidewalks are for chalk and hopscotch...

Then, one morning I awoke to the loudest cacophony of jackhammers and diesel and truck-backing-up-beeping and the sidewalks were gone! They'd been sawed at and chopped up and hauled away and holes appeared. You could see the sandy beach beneath the streets, the dirt and tree roots that form the real foundation for our footsteps.

The workers worked quickly, digging up and pouring concrete. It only took them a day or two to finish the few blocks that I watched. 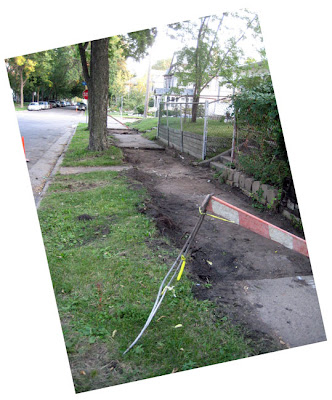 [The dirt underneath Minneapolis sidewalks.]

[Pouring the new sidewalks.]
I can't actually find the section in the Minneapolis City Code where they talk about how large a gap there can officially be between the paving blocks. Officially, I remember reading once that the city has to keep sidewalks level to a certain degree, and every once in a while they obviously go around measuring the cracks in concrerte, and then fixing them.

I'm not sure what the assessment is, but I'm sure its expensive. Despite my concern for sidewalks, I don't actually care that much about what they actually look like. Whether or not a sidewalk is good or bad, or worth walking on, has little to do with what sort of material it is. The sidewalks of Prague are some of the best in the world, but their cobblestones are terrible for walking (or so I've heard). In my opinion, apart from disability access, there's little reason to go around spending fixing sidewalks may have risen 3/4 of an inch.

Anyway, It's interesting to see sidewalks being poured. I resisted the urge to place my hand or write my name in the wet concrete. 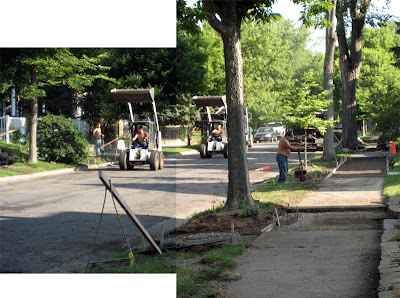 [Sidewalks are made quickly by men without shirts.]
Posted by Bill Lindeke at 11:24 AM