Sidewalks are a Riot! 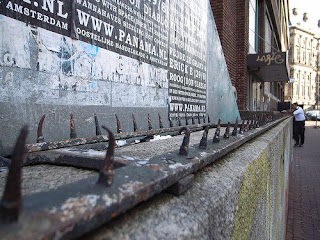 [Defensible space. (via)]
There are lots of reasons why US housing policy skewed so far towards single-family suburbanization during 50s, 60s, 70s. At lot of it had to do with cultivating consumer culture, real estate interests, cold war fears of apocalypse, an ideological fetish for country living, disinvestment in urban housing during the depression, and (yes even) consumer preference. It's a tangled web we weave, when first we practice to leave the cities.

But one of the other big push factors was agoraphobia (a.k.a. fear of crowds). Density, cities, and public protest have a long history, and you can read the idea of political control into a great deal of the history of urban politics and public policy. The history of urban America is dotted with riots, protests, and labor unrest. The Boston Massacre. Haymarket. MLK.

Crowds mean power. Big crowds can burn down valuable private property, or make strong political points. And the right to assembly is a big part of the labor movement, so that sqaushing these crowds has been a central plank in US business policy for a long time. Suburban spaces, decentralized and spread thin, are far easier to control and police. It's almost impossible to have a good riot in the 'burbs. 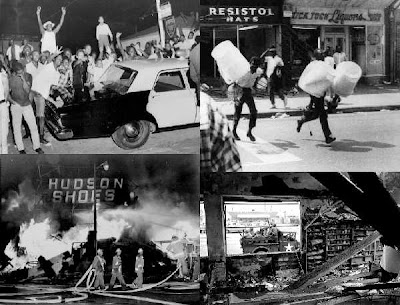 And then there's the history of riots in the 60s, which adds a whole nother chapter of fear, race, and longstanding urban poverty took the suburbanization process into a new high gear.

And part of the problem is that density does lead to riots. The very same social dynamics that make cities exciting spaces can make then goddamn frightening. 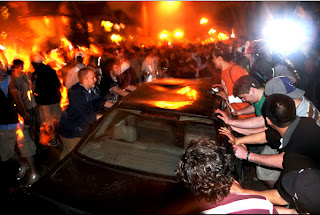 [Students protesting auto dependency.]
And Dinkytown, dinky as it is, has a lot of the main components for riots: density, sidewalks, young people, and intoxicants. Most of the time these things mix really well, and it's a great place to spend an evening. But sometimes, and for no reason at all, the latent revolution of sidewalks pops out its head.

That's what happened this last weekend. Why did the U students start lighting things on fire? Simply because they could! It's been a long winter...

It's really fun to bike down University Avenue past all the fraternity houses on a weekend night. Especially during the Spring, the front lawns of all the frat houses are filled with young kids having a great time, drinking, dancing, listening to music. 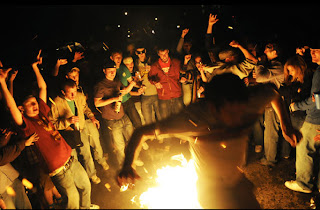 [A spring ritual that would have been familiar to Dionysus.]
But you can see how easily, when the Gophers win the NCAA or when the band cancels the show, they might just drift down the street and start tearing down stop signs for no reason at all.

In a way, aren't sidewalks to blame for the Dinkytown riots? The rumor had it that one my college dorms was designed with no right angles, and in sections, simply to keep students from rioting. Wouldn't life better if we all lived in defensible space? Is this why most high schools so closely resemble prisons? 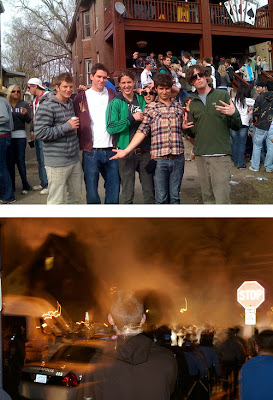 [The two sides of sidewalk density.]
Posted by Bill Lindeke at 9:26 PM