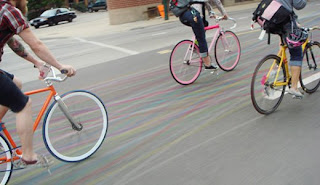 One thing that vexes me about sidewalks is that they have no memory. They forget so easily.

It'd be really nice if, like footprints in snow, we all left some kind of trace while we walked down the sidewalk. If, somehow, our footsteps, our wanderings, our gazings, and our speech left little traces on the streets? What if people could see and hear traces of past walkers on the sidewalks all around us?

Well, there are indeed ways to trace our steps, to turn streets into recording devices for human beings. One way is this thing, called the Contrail, that leaves little chalk marks behind your bicycle. No longer will you bike alone. Rather, each bicycle will leave a colored trace behind it, and you can literally follow in the wheelsteps of your bicycling brothers and sisters. As you ride, you leave a path for others to come, and the street becomes alive with the presence of all hours of bicycles. 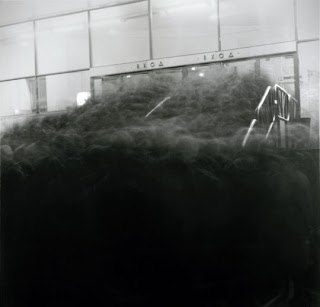 Another way to trace our steps, so to speak, is through the camera lens. You're probably familiar with those time lapse images of cities, showing everyone rushing through an intersection like ants, or cars blurring into long streaks of red and white light on the freeway.

This is a photo by Russian photographer Alexey Titarenko, showing a long exposure of people descending a staircase. (h/t Weschler for the link.) The bodies become a black and white blur of shape and shadow, and people are lost in a crowd of humanity moving out of the hard and fast lines of the building walls. Here, there's nothing left but the trace. People become lines for flights of stairs.

As wonderful as Titarenko's photos are, though, they're not even my favorite sidewalk traces. For those, we have to turn to American photographer Peter Funch, who has these amazing photoshopped photos of streetcorners in New York.

[A world where everyone has an envelope.]

He camps out on a streetcorner and takes a heap of photos of the same sidewalks, and then photoshops together people into groups across time (but within space).

[A world where everyone is moving equipment.]

Sidewalks bunch people.These photos are alternate universes, explorations of urban emergence. If everyone pushed around carts when they walked through the city, the world would be a very different place. Here, the traces of our everyday behavior are gathered together and shown as groups. Moments of the city are grouped, and the tiny ways that we shape our lives are traced and tied together.

This last one is a dead ringer a dead ringer for Cartier-Bresson's famous 1932 photograph of a man jumping over a puddle in Paris, only here everyone is in mid-jump. Nobody is grounded, and everyone skips lightly over the concrete, flying through the air if only for a split second.

Check out all the images. Sidewalks group people. It's absolutely wonderful.

[A world where nobody touches the ground.]
Posted by Bill Lindeke at 9:22 AM

very worthwhile. ;) and this: http://erdalinci.tumblr.com/page/2