[This is content recycled from my now mothballed website, www.excitablemedia.com. Please enjoy!]
Nineteen-hundred and thirty-one, that watershed year, saw the public opening of not one, but two all-new New York bridges. In spite of their concomitance the two '31 bridges display deeply contrasting personalities. While the Bayonne Bridge (BB) spans the Kill Van Kull, the shipping channel separating New Jersey and Staten Island, the George Washington Bridge (GWB) bridges the mighty Hudson river, connecting upper Manhattan with the bluffs of New Jersey. Needless to say, when they opened to the public, the BB received a fraction of the accolades and limelight accorded to its larger non-identical twin sibling, an anonymity that would prove to be a recurring theme throughout its lifespan. 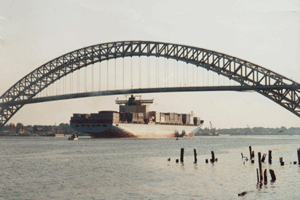 [A ship, shipping.]
Both bridges were the offspring of famed Swiss-born bridge architect, Othmar Amman (1879-1965), whose impressive bridge resume is a veritable catalogue of New York's modern bridge era; the Triborough, Whitestone, Throgs Neck, and Verrazano-Narrows are all Amman's work. While most of Amman's bridges are suspension bridges, the BB remains NYC's lone steel-arch bridge, an unconventional design which, geometrically speaking, is the inverse of a suspension bridge turned upside down. Due to the inadequacy of his biographical record, we may we may never know why Amman strayed from his formal comfort-zone with the steel-arch construction of the BB. Perhaps the once-in-a-lifetime opportunity offered by simultaneously designing two geographically overlapping bridges allowed Amman to experiment, but whatever the reason the results have been mixed at best. Like many bridge design ideas (catenaries anyone?), steel-arch bridges never caught on with the general bridge-crossing public, and nowadays the steel-arch fad of the early 30's is nothing more than a historical curiousity.

[Select pedestrians can find the walkway.]
Throughout it's lifespan the BB seemed to shun the public eye, enduring it's anonymity with a nearly stoic determination. This aloofness, however, didn't sit well with the citizens of the Tri-state area, whose demand for flambouyance is legendary, and locals responded by further relegating the BB to the margins of bridge-society, creating a viscious cycle of pride and condemnation from which neither party is likely to emerge victorious. For example, according to Department of Transportation data, most commuters prefer taking the BB's close rival, the Goethals bridge, by an almost 3-to-1 margin. Sadly, the BB's general unpopularity is reinforced by a stubborn bureaucracy that seems determined to undermine what little popular support the BB does manage to garner. For example, when the Port Authority of NY/NJ decided to adorn each of its bridges with lights in an effort to increase public bridge morale, the BB was the last bridge decorated. And later, when they removed the lights to conserve electricity, the BB was the first to be un-strung. 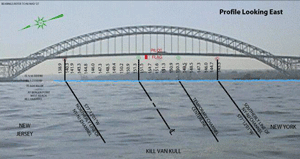 While lighting might seem not to factor into the transportation decision of the general commuter, seemingly subtle aesthetic details do affect the level of bridge-confidence. Another famous anecdote goes like this: When the Bridge Division finally decided to repaint the BB, ending a long string of neglect, they hired the Trevor Sears Constrution Company, a firm widely known amongst area bridge painters to be slipshod at best. A recent OHSA investigation of the BB repainting revealed a number of health and aesthetic violations. Trevor Sears was forced to pay a $18K fine, but this hardly seems like adequate bridge justice.

More alarming was this recent occurrence, a further symptom of a bridge that has never received proper recognition:

BAYONNE, N.J. (AP) - A bridge spanning a shipping channel was closed briefly and sustained minor damage early Friday when it was bumped by a ship, authorities said.

The underside of Bayonne Bridge connecting Bayonne with Staten Island, N.Y., was damaged by the mast of a container ship, said Port Authority spokesman Pasquale DiFulco.

The bridge was closed to traffic following the 8 a.m. accident so inspectors could check for damage. It was reopened about an hour later, said Steve Coleman, a spokesman for the Port Authority of New York and New Jersey, which operates the bridge.

Coleman said maintenance and safety crews inspected the bridge and found ``very minimal damage - what they're describing as cosmetic damage.'' It did not appear at first glance that the bridge would need repairs.

According to one eyewitness, the captain of the ship apologized to the bridge immediately after the incident. "Oh, I'm sorry. I didn't see you there," he said.

It can't really have success, I feel so.