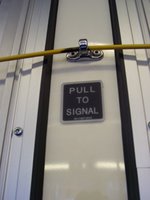 A while back I was reading the "The Economist" column in the NYT Magazine, and they had a question that went something like this.

"I was riding the bus in Chicago and the bus stopped for this woman who had a baby in a stroller. The rules are that you can't come on board a bus unless your stroller is folded up, and when the woman tried to get the bus driver to wait for her to fold up the stroller, the bus driver said 'Sorry lady,' and shut the door in her face. Doesn't this seem wrong?"

The Economist (or was it The Ethicist?) then replied that the bus driver had done the right thing, pointing out something like the Kantian categorical imperative. If everyone made the bus wait 60 seconds at each stop, the buses wouldn't run on time, and people wouldn't be able to get from place to place.

A similar thing happend the other day while I was riding the 3B. This lady came running up to the bus just as the driver was pulling away and shouted, but either the driver didn't hear or else didn't want to wait for her.

Then later that trip, the driver noticably prompted a few Slow Payers (i.e. those people who fumble to get their bus cards out, and then stick them into the reader the wrong way causing valuable dozens of seconds to elapse) to move on into the bus and stand in the isle while preparing their payment. Whatever the cause, that driver was driving like a bat out of hell (if that bat were stuck in traffic and obeying all flying mammal traffic laws.)

Of course, some times bus drivers will see people coming from down the street and wait patiently for them to arrive at the door. Sometimes bus drivers will help people with their cards, or chat and shoot the breeze with the door ajar, as if they're on break or something. In fact, I'd way Minnesota busses are distinctively personal. Many drivers greet you and thank you when you board and exit, and many of them seem to proceed oh so leisurely down the avenue. One might say that they cruise.

It prompts the debate:

Is it better to be cold and quick . . . or warm and stately?

Should drivers maintain professional demeanors by focusing on driving the bus . . . or should drivers chat and engage their patrons?
Posted by Bill Lindeke at 10:54 PM

Labels: tales from the bus

two years ago, i never ran a second late unless something out of the ordinary happened like a breakdown or an accident. now, the company has been shortening the amount of time it takes to get from a to b. now if i look at the clock and i'm five minutes late, i consider the bus on time. 15-20 is an almost daily occurence

sometimes you can run on time, and that's when you'll wait for people running, or take the time to explain things. when you're not on time, that time comes directly out of your 5 minute piss time (forget meals - you officially don't get them), and if the next bus is just a few minutes, you won't wait for your own grandmother.

a supervisor tried to write me up for a violation a few months ago because i "only told" someone, rather than enforce the rule, to fold her stroller.

i don't think it's a personality issue, it's an environment. i'm one of the nicest drivers out there when i'm on time, but i'm an asshole the other half

You're just the man I wanted to ask.