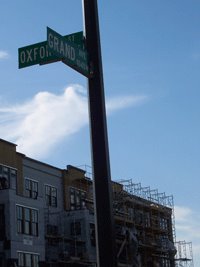 Grand avenue made headlines a few weeks ago when Councilmember Dave Thune started publically advocating for a moratorium on new building permits on Grand Avenue, Saint Paul's most self-promotional main street.The recent debate centers around corporate development, and is particularly spurred by a number of new developments:

1) The mixed-use condo one block east of Grand and Lexington... it includes an outlet of bad-boy chain pharmacy CVS, right across the street from longtime neighborhood fixture Bober Drug. Will they survive? It’s doubtful.

With their proposal, Thune, along with the typically pro-business Summit Avenue Association, have set a new standard for Minnesotan up-to-dateness. They advocated for a moratorium on what is called "formula retail," that would theoretically run from Summit Hill to Ayd Mill Road.

At first glance, it seems like a proposal to end chain store development. It begs the question of what is and is not a chain. For example, is Kowalski's a chain, even though it's local? Is the Dunn Brothers coffee shop a chain, even though its the first store of its chain? No matter how you define it, separating formula retail from non-forumla retail seems difficult.

The PiPress said as much in an editorial:

We heard that neighbors of the Great Harvest bread store complained when "their" bakery relocated from Grand Avenue, even though Great Harvest is a chain with stores across the country. Kowalski's grocery is part of a locally owned chain, but seems to pass muster with the "no-chain stores" contingent. At what point does a cluster of stores with the same name become a chain? If a new zoning ordinance prohibited "chain" grocery stores, would that include Lunds, Byerlys and Kowalski's?

Arguments on the nature of chain stores become inconsistent. How can anyone argue that Restoration Hardware passes the chain smell test because its products are upscale, whereas a Radio Shack fails?

It's not the job of the Planning Commission and City Council to pass judgment on the quality of goods offered on Grand Avenue.

But, actually, Saint Paul is following in the footsteps of San Francisco. According to the latest issue of New Urban News, last year San Francisco initiated a series of formula retail laws. They involve a number of regulations:

This is one approach that concerned neighborhoods can take to limit the spread of chai stores. Alternately, can limit the size of new stores. The tourist town of Bristol, Rhode Island, limits each new chain store to a miximum of 2,500 sq. ft. and a width of 65 ft.

The issue is really that a neighborhood ought to be able to exert some control over what kinds of businesses move in. Whatever Grand Avenue decides to do, it had better act fast, before Caffe Latte turns into a Wal-Mart.
Posted by Bill Lindeke at 6:13 PM

Wrong About Google Print?
Was I Wrong About Google? You gotta love blogging, what with bloggers challenging the mainstream media and then readers weighing in with comments, taking the bloggers themselves to task.
Find out how to buy and sell anything, like things related to assurance construction quality road on interest free credit and pay back whenever you want! Exchange FREE ads on any topic, like assurance construction quality road!