stp: CVS turns its back on the street 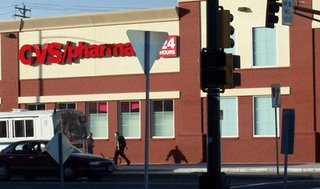 The new CVS/pharmacy pharmacy on Snelling and University is almost open, and is as bad as expected. Community people complained at the time, when the design specifications came out, that the company was turning its back on the street.

As I recall, the neighborhood group wanted a door on University or Snelling, which happens to be not only the busiest bus stop in town, but where a light rail train is scheduled to go sometime in the far distant future.

I also remember hearing something about a "compromise" where the store agreed to make some changes, but clearly nothing really happened. There's a big brick wall where an entrance should be.

It's not as if companies can't design interesting, pedestrian friendly storefronts. THey can, and do, if they're forced into it.

The latest issue of New Urban News has this to say about a Walgreens in Ohio:

Unless a community has regulations requireing a change from the stock design, America's largest drugstore chain "won't go along." Developer Richard Erganian tried to use a version of Mastrian's [unique Ohio] design in Fresno, California, but Walgreens rejected it ther on the grounds of not wanting to set a precedent. For now, it appears that municipal codes and community resistance are the key to locally sensitive designs.

Maybe the new CVS is just trying to match the "bathroom tile" ugly across the street: the forsaken Spruce Tree Center...
Posted by Bill Lindeke at 2:36 PM