Q: Saint Paul has a flag?

Yup. Saint Paul has an official flag. Seriously, it's official. 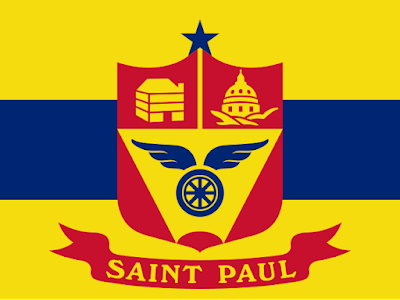 The city held a flag-designing contest in 1932 and unveiled the flag during the opening of Kellogg Boulevard, which was formerly called 3rd Street. The flag contest was also likely connected to the dedication of the brand-new City Hall / County Courthouse, which took place the same year. So the flag is over 80 years old.


Q: How come I've never seen it before?

Most city flags toil in obscurity, and Saint Paul's is no exception. There's one on the ground floor of the courthouse, there's one above the scoreboard at CHS Field, and there's one that the Mayor's office sometimes uses for photo ops. But other than that, you don't really see it flying anywhere. 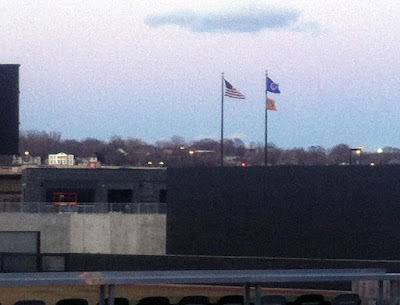 Q: Who designed it?


Q: What are those things in the shield?

On the top left, it's the capitol dome foregrounded by grain. On the top right, it's the cabin of Father Lucien Galtier, built in 1841. He was the guy who changed the settlement's name from Pig's Eye to Saint Paul.

Then there's a wheel with wings on it, meant to signify Saint Paul's place as a transportation hub of the Northwest.

The blue stripe represents the Mississippi River. And the star at the top is a reference to l'etoile du nord (the North Star), Minnesota's official state motto.

Well, kinda... I guess you could make case that the Red Wings logo is a more literal, side-view of the Saint Paul's abstract representation.

Interestingly, both logos date back to the same year, 1932. I guess "put a bird on it" was a thing back then, too. The Red Wings' logo dates to late October, so it's likely that the Saint Paul "wheel-plus-wing" thing came first. Maybe Detroit copied Saint Paul!

Q: Haven you seen the 99% Invisible thing on city flags? You should watch it. This one breaks the rules.

Yes. It's quite good.

And yes, Saint Paul does break one of Roman Mars' vexilological rules -- no text on flags -- but apart from that, I think Saint Paul's flag is solidly above average. Seriously, you should see other city's flags. They are almost all terrible.

Interestingly, the original Mittle flag did not have any text on it. I'm guessing some unnamed bureaucrat decided to add the "Saint Paul" banner in a moment of insecurity. 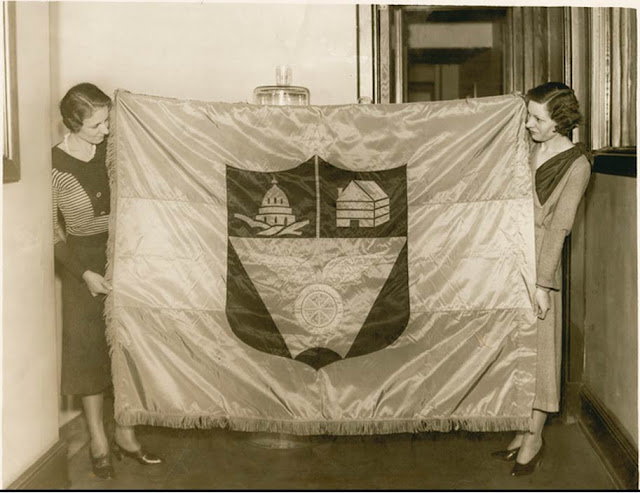 Q: There are multiple versions?

Three that I've seen. The original one in the Historical Society photograph, the one in the City Hall lobby, which is missing the blue stripe for some reason, and the one that I'm selling today.

In the different efforts to get flags printed, I have slightly tweaked the colors. Currently, the blue that I'm using is the same blue as the Swedish flag, while the yellow is closer to a primary yellow.


Q: What font is that anyway?

According to local typography aficionado Andy Sturdevant, it's Windsor. Which is pretty cool because, as Andy says, that's the font that Woody Allen uses for his film titles.

Order one today on my website store! It's easy.

If you live in Saint Paul, I will deliver it to your mailbox via bicycle! Otherwise we will work out a shipping arrangement.

The door is over there. That way, just to the left of the fireplace.