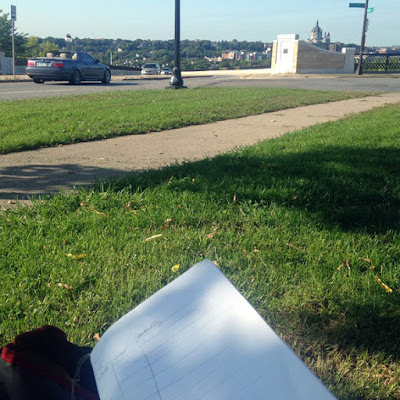 Well it happened again. I went and sat in a vacant lot (note: this vacant lot is actually sort of an unofficial official City of Saint Paul “park” called “Capitol View Park” or something though it does not seem like a real park as it is literally just a green grassy vacant lot with one tree next to which I sat, but someone must mow it so I guess it is a park of sorts) for two hours and watched cars go by, all the while counting the people and bicycles as they went by on a lovely afternoon in the early Fall.

This time, instead of a view of the dingy liquor store, the other vacant lot, and the Burger King drive-thru, I enjoyed one of the best view in the Twin Cities. The Saint Paul bluffs and downtown skyline spread out before me like a grand buffet, the Cathedral and the still-shrouded Capitol (like a particularly boring work by Christo, the saffron-themed public artist), punctuating the gentle lines. So, even in the worst-case carpocalyptic bike-counting scenario, at least the afternoon’s vantage would not be a total loss.

As it turns out, there were some lovely things about bike/ped counting at the top of the high bridge for two hours on a Tuesday. As I settled in for my now-familiar annual routine, I contemplated the fate of my city in general, and this bridge in particular. This time next year, the bridge will be traffic free, as it’s being completely re-decked as part of a reconstruction of the entire MN-Highway 149 urban corridor. (More on this in subsequent posts.)

The way that the top of the High Bridge works: the bridge is a 1/2 mile long stretching from the low bluff of West 7th/Smith Avenue (aka “upper town” the name that nobody uses) over 100’ in the air to the top of the Cherokee Heights bluff. For the most part, it’s a straight shot as it rises at a angle up over the river valley, but right at the end of the trip it curves slightly as it reaches the intersection with Cherokee Avenue, before traveling one more block to George Street. This curve reduces sight lines for drivers coming up the bridge, and probably encourages people to slow down slightly during off-peak hours.

During rush hour, though, speeds here are pretty low due to mild queuing at the George Street traffic signal. In fact, they’re very low! Based on my non-speed-gun-having intuition I’d venture to say that 90% of the cars moving along this stretch of road are traveling less than 30 miles per hour, and probably over half of the cars were at 20 miles per hour or below.

(On the bottom of the bridge, on the other hand, it’s completely a different story, as numerous homeowners whose homes have gotten in the way can attest. And what happens during off-peak hours, who can say?)

More notably, the slow speeds on this stretch combine with mild congestion, so that cars basically crawl along slowly but steadily along this block or two at the top of the bridge. It’s not a traffic jam, but it’s not a high-speed road. It’s something in between, like the driving behavior on the denser parts of Grand or Payne Avenues or some of the better downtown streets like Wabasha. It’s a happy middle ground that is very rare in Minneapolis and Saint Paul, where cars are traveling at around 20 miles per hour on a commercial street. Granted this is only two blocks of the street, but for me those speeds and capacities are close to the ideal for an urban commercial street. I’d love to see our urban arterials re-designed to be 20 mph medium-congestion streets, and I think they’d work well and be much safer.

(Granted, this is a two-lane road; a four-laner would likely be a different story.)

Apart from safety, one big reason why the 20 mph speed is so important is that car noise is greatly reduced. According to my handy decibel meter, from where I was sitting 20’ from the travel lanes, the average noise level sat in the 70 to 80 db range, well within the parameters where two people can carry on a normal conversation without shouting. Occasionally, a truck or school bus or motorcycle would go by and it might beak at mid-90 db, but compared to the traffic noise on a street like Snelling, the experience was pleasant enough.

Apart from freeway walls, noise is one the factors that is rarely considered when thinking about urban road design. Being next to a busy road with cars traveling around 40 miles per hour is loud and unpleasant. This stretch of street, on the other hand, was almost enjoyable, though there remains a certain soul-sucking erosive quality to the endless stream of cars.

Also motorcycles are terrible. Bicycles, on the other hand, are so sneaky and quiet! Sometimes a downhill-traveling bicyclist would zip by my perch so quietly and quickly that I might have missed one or two while distractedly staring at my phone. 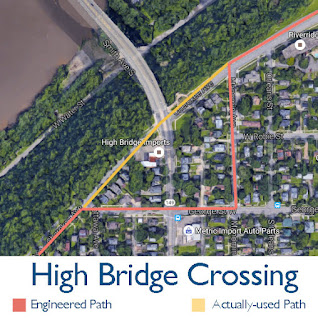 Years ago, in one of my first official Transportation Committee (of the Planning Commission) meetings, I heard a presentation about the new bike trail extension that connected the new Ohio Street off-street bike trail West across Smith Avenue over to the Cherokee Park. The trickiest part of the route was the crossing at the top of the High Bridge, and the engineers planned a “detour” of sorts where the bike route would veer away from the bluff line and travel two blocks up to  George Street where there is a signalized intersection, before continuing back over to the bluff on the other side.

At the time I remember pointing out that that "design" (sharrows and a one-block long bike lane) was going to be basically useless, and asked wouldn’t it be better to actually try and improve the curb-cuts and pedestrian / bike crossing at the "intersection” of Cherokee and Smith Avenues where the bridge meets the bluff?

The engineer or designer (I forget who it was by now) said “that wouldn’t be safe” and listed reasons about the curve, the sightline, the “false sense of security” argument about crosswalks.

At the time I thought, “yes, but people will use it anyway, and nobody, like 1% of people, will use the signed and designated route. So what are we accomplishing with this design then?” (I.e. CYA LOL.) There was also some talk of a future trail cantilevered underneath the bridge, though I cannot fathom how that would ever happen.

Well anyway, the detour design is what happened. And it turns out that almost everyone ignores it and continues crossing at the unmarked crosswalk. Dozens and dozens of people do this every day, including people walking dogs, groups of bicyclists, pairs of runners, etc. Sometimes, especially when the traffic speeds are low like this, drivers even stop to let them cross!

Imagine what might be possible at this crosswalk if we actually signed or striped it? Would it give people a false sense of security and lure them to their death? Would it improve walking and biking crossings here and help boost active living, like so for example you could bring a family here? Would it slow traffic down here where the bridge meets the neighborhood? Might there be a way to re-design this crossing design a situation where everyone can more easily communicate with each other?


#4. The "Urban Bridge Problem" can be Solved

I’ve written before about the problem of bridges, where the absence of intersections or curves catalyzes high speeds that often come crashing into dense and chaotic walkable areas. The classic example of this was the old Washington Avenue bridge that fed four-lanes of high-speed car traffic into the very middle of an urban University campus, but this is a problem that occurs at the ends of nearly every bridge. (On- and off-ramps have the same problem by the way, and more frequently.)

The list of problem bridges is long, and includes nearly every river bridge in Saint Paul. Wabasha might be the best of them, certainly Ford and Marshall are badly done, while Robert is likely the worst. Given the design differences between simple bridges and complex streets, “the bridge problem” seems insoluble.

But since I first wrote about bridges back in 2013, Minneapolis and Hennepin County have done wonders with two of their bridges. First it was the Plymouth Avenue bridge, where the City installed a protected bike lane. Then just a month ago, the re-decked Franklin Avenue bridge re-opened [pictured below], and raised high the bridge bar. The new Franklin design is amazing for bikes and people walking, and keeps cars contained at low speeds without much impact on traffic.

There are lots of bridges where we could remove a traffic lane or make some design changes that would lower speeds in the interest of reducing speed differentials. Minneapolis' amazing new bridge designs (now including a real bike lane on Hennepin!) are shining examples for Saint Paul and Counties to follow.

Speaking of which, slowing speeds on the bridge might not be a bad thing, as the 1/2 mile stretch of road has the best view in the entire Metro area. Why not design the bridge to reduce speeds, and let people savor the journey just a bit? I go over the bridge hundreds of times each year, and it still takes my breath away.

Watching people running, biking up (slowly), biking down (quickly!), walking around and snapping photos at the top of the bluff, it would be really nice if the car traffic didn’t detract from the experience. Ideally, the Smith Avenue bridge could feel more like the River Road, which it is, in a way. Lowering the design speed with lane widths or something similar to the Franklin Bridge would be good for both adjacent neighborhoods, help alleviate some of the negative mental health impacts of the bridge itself, encourage walking and biking and spending time over the river, and have little-to-no impact on traffic flow. 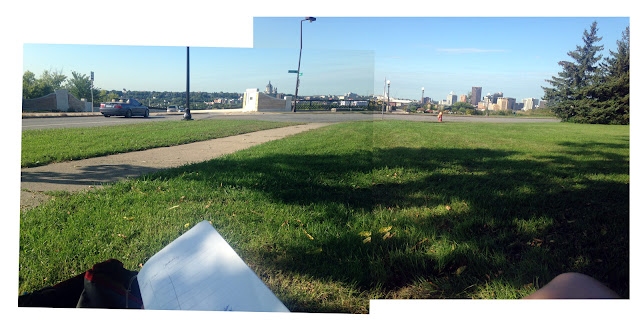 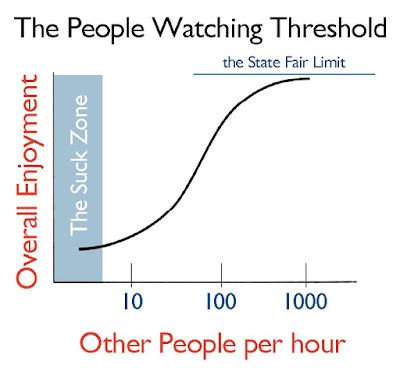 At any rate, people seem to love going up and down the bridge, on bikes and on foot, relatively speaking. Compared to the other West Side bridge roads that I’ve counted, this spot had the most bike and recreational traffic. (The Wabasha bridge, by contrast, seemed to be mostly people walking to and from their parking spots.) And that activity made a huge difference for how the street and the neighborhood felt as a public space.

I left with the thought that it doesn’t take all that much to transform a desolate sidewalk into one that seems social and active. In other words, the “people watching threshold” is fairly low. Just 10 or 20 people passing by per hour can end the boredom, and give you something to see, people to notice, an occasional light conversation. As I see it, the relationship between people density and public space is sort of an S-curve shape, with a lot of work being done by those first dozen or so “early activity adopters”, and the people-watching interest intensifying gradually, accelerating at around 100 people per hour, until reaching some sort of diminishing return toward what I might call the “State Fair limit point,” at which you get a bit overwhelmed by a crowd.

In sum, it’s nice to sit on the bluff and bike down the bridge when cars are going slowly but safely down the street. It’d be nice to design streets and bridges that encouraged that sort of thing.

Now that I've completed the West Side bridge-crossing trifecta, I wonder what's in store for me next year?