In case you haven't heard Open Streets (a.k.a. "sunday streets" or cyclovia) is an interesting active living and urban design event that comes out of South America, and first arrived in the Twin Cities a few years ago along Lyndale Avenue in Minneapolis. I'd like to report that Saint Paul's debut effort was a resounding success, but (despite the organizer's proclamations) I can' quite bring myself to do so.

Rather, I think Saint Paul's Open Streets was a qualified good start. Sunday the 15th was a moderately lovely day. It was a bit cloudy, and what we in Minnesota might generously call" brisk." But eventually the sun came out, and it was lovely weather. Maybe it was the grey skies, but turnout was lower than I was hoping.

Maybe one of the reasons is that University Avenue, the site of the Open Streets event, presented a few challenges for the format. First, when cars are removed, you really begin to realize how barren, and dehumanizing the street architecture actually is. Vacant buildings and parking lots are everywhere. Very few doors, houses, or shops meet the sidewalk. Those that do seem devoid of people. Outside of a car, Saint PAul often feels like a ghost town, and University Avenue is no exception. (Inside of a car, it's too dark to see.)

The second challenge of the street was the light rail itself. Construction for the train involves large concrete barriers that divide the road in half, length-wise, and make it difficult or impossible to cross the street. Compared to other Open Streets events that I've attended, the LRT concrete put a damper on the potential of the street to be transformed into a people-centered place. Other than a few intersections, the two sides of the street feel disconnected these days.

That said, the event was a success in my opinion. Saint Paul's first stab at the format illustrated some of the challenges faced by non-motorized transportation movement, particularly around the way that cars are perceived differently along race and class lines. And for that reason, it was a good start at trying to re-frame how our streets are designed and used in Saint Paul.

Two lessons in particular jumped out at me...

In my research on bicycling and walking, it's very interesting to see how bicycling and walking are perceived differently across different race and class divides. From the dominant upper-middle class White perspective, biking and walking is perceived as a statement about fitness or environmentalism, a choice people are making to express their values. But as any regular bus rider knows, for communities of color, non-motorized transportation is a necessity. Transit, biking, and walking are often something you need to do to get around, because you need to. Being "liberated" from cars means something different if you've never really had one in the first place.

It's also worth mentioning that people advocating for non-motorized transportation can sometimes overlook cultural differences in how public spaces are used in everyday life. For example, think about the different attitudes toward front- and back-yards, towards music and expression, and towards clothing and dress that are always at work within social situations. Assuming that people have the same cultural and social framework for perceiving something like a "public meeting" is a mistake too often made within planning and community engagement.

That said, just like the last two Lowry Avenue Open Streets events in North Minneapolis, the full diversity of Saint Paul's University Avenue was on display on Sunday. There were different stages where the area's main cultural groups performed, including a stage devoted to hip-hop (pretty sure I heard YN Rich Kids performing their "my bike" song), one that featured predominantly White artists, and another one filled by Asian-American musicians. Traveling up and down the full two-mile stretch of the street, you could really hear, smell, and see the diversity of Saint Paul. It's something that should make us proud.

And it turns out there can be a lot of common ground between different parts of our community when it comes to streets. Everyone wants to feel safe crossing the street. Everyone wants to have places for their children to walk and ride bikes without being threatened by fast-moving cars. At its best, Open Streets builds bridges between often disparate groups, bringing them together around improving safety and quality of life along the streets that we all share.

Any critiques of the Open Streets event need to keep this diversity in mind. A common refrain I heard from some of the planners and advocates was that the Open Streets "needed more events," that the street felt too empty. I agree to an extent, but I worry that more fully "programming" the space might limit the inherent creativity of the different parts of the neighborhood. As I've written before, one of the brilliant things about the Open Streets format is that it doesn't tell people what to do, how to use the space. It simply makes it available, and then let's the inherent generative potential of people flourish. While this event felt a bit sparse at times, I'm quite hopefully that next time Saint Paul puts on an Open Streets event, more people will take to the streets in their own ways, and even more bottom-up activities might emerge.

Some Small Businesses "Got It"; Most Didn't 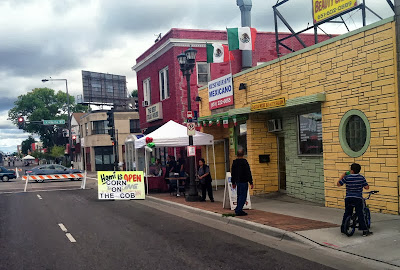 This is connected to the first point. In the weeks and days leading up to the Open Streets event, I'd had a few discussions with leaders of the business community and arts organizations along the avenue. Despite the outreach and preparation work done, many people along University Avenue didn't seem to understand exactly what kind of event this was. (It's only natural that there would be confusion, as this kind of event IS complicated and might not easily translate across cultures.)

That said, one thing that was on full display was the wide range of approach to marketing the small businesses along the street. For example, the dozens of Asian-American restaurants along University Avenue are one of Saint Paul's best features. I haven't counted them all, but I'd bet you can buy a bowl of pho at more than a dozen different unique places along the street. But of all of these businesses, only a few seemed to clearly understand the nature of the event, and set out food along the street. Homi Mexican Restaurant was selling lots of roasted corn, Johnny Baby's rib sandwiches were doing a brisk business, and Lao Thai's food table was crowded all day long.

But meanwhile, outside of that handful of shops, most places had little to nothing out on the street. There were whole blocks with no displays, no tables, no smells, no samples. It was a real missed opportunity to connect the often-isolated car-centered University Avenue shops with each other.

In a way, all the open space of the first Open Streets is OK with me. It means that there's a lot of opportunity for the many people who live and work along University Avenue (or any future Open Street) to claim their social and physical spaces, and re-make them however they like. I'd like to see future Open Streets events be more aggressive about getting people outside, out into the public spaces. Hopefully, Saint Paul's first attempt is just the beginning. Down the road, I'm excited about the possibilities that come with freeing our streets from cars for a day.

I was fortunate enough to experience a ciclodia (not to be confused with cyclovia, which is a cycletrack)while I was in Peru. It was a much different event with many similarities to University Ave. Avenida Arequipa is a busy divided 4 lane road with a cyclovia (cycletrack) down the middle lined with benches, trees plants, etc. Which provides a similar barrier as the LRT tracks but actually provided a more hospitable place for people to congregate when they weren't rolling or running on the Ave. Another similarity was that the Avenida Arequipa didn't have many places along it that embraced the street, mostly because Ave Arequipa is a monstrosity of traffic the other 6 days of the week. The places that did have something to offer weren't open because almost nothing is open on Sunday morning/afternoons in Lima. (The Spanish had a higher Catholic conversion rate than the Irish did in STP) So if people weren't gathering on the cycletrack down the middle of the street they were hanging out in intersections.
The main difference I found with the cyclodia and Open Streets is that the Cyclodia was strictly a public health initiative. There were truckloads of bikes dropped off at intersections for people to use and marshals every few blocks reminding people on wheels to use the left lane and people walking/running to use the right lane, I even had a couple comment on my lack of helmet. There was a main square that was at one end of the route that had a park with a playground that had an aerobics stage and some volleyball nets set up in the street around it.
I think the environment there had a lot of similarities as University Ave but I would say Arequipa got way more people at it. Part of that I think is because it's a city of 10 million people but also because their streets are far more inhospitable to cycling than anywhere I have ever been before. And despite the number of pedestrians everywhere during the rest of the week buses, taxis and drivers do not yield to them. So I think the cyclodia affords people an opportunity to experience a street much differently than any other time. Whereas here most neighborhood streets can be played in with relative comfort. There is virtually no such thing as a quiet street in Lima. Perhaps if Open Streets where held on a weekly basis on the same street they would evolve into something similar.

I went, though the weather was probably a factor keeping people away -- that was part of the reason why it took me until relatively late to get there.

I'm not sure Sunday is the best day for these events -- many businesses were closed. The street would have been a bit more lively on a Saturday.

I'm not sure what to make of this tidbit, but I realized that this was the exact section of the LRT line where the three extra stations were included late in the planning process (Hamline, Victoria, and Western).

Anyway, the LRT tracks and barriers definitely put a damper on this too -- though I was amused by the folks walking/biking along the tracks and getting a preview of what the LRT experience will be like.