The Gun Metaphor: Why Bikes are the Guns of Transportation Policy

[Second in the highly unpopular "metaphor series" of blogposts.]


I just learned Open Streets this weekend is going to have an exciting new event this year.

For those who don't know, Open Streets is an amazing event where the city takes a street normally choked with cars (in this case, Lyndale) and devotes the space to people for an afternoon.

It's only a few hours, but this simple gesture reveals with a flourish how radically street design can change the feel of a city. For a few hours, Lyndale (or Lowry or Central or Minnehaha) magically transform from an anxious-provoking car sewer into an almost transcendent place for people to do anything they please. People walk their dog, ride bikes, do yoga, sell lemonade, or slowly meander around with a loaded handgun attached to their hip. Yes, this year brings us the first ever "Open Carry Open Streets."

Here's a description from the flier:


Join us for this series of open carry social meet up opportunities in Minneapolis & St. Paul! The streets will be closed off to vehicles on the following dates, so we're using this as a perfect opportunity to promote pro-active, positive visibility for law abiding gun owners. Bring a lawn chair, bicycle, picnic lunch or whatever!

Let me be the first to say "welcome." Don't get me wrong, I'm no fan of handguns. I don't like them. I don't want one. I think they're fantastically stupid. Highly believable studies show that you're more likely to be shot with your own gun to be the one doing the shooting. (That's true for police too.) Hell, even if I had the chance to shoot an intruder who intended to do me harm, I wouldn't do it.

If it were effective or politically possible, I'd be in favor of closing the gun show loophole, passing an assault weapons ban, and I'd even embrace handgun laws like Chicago's, DC's, or New York's.

But in the real world, I don't care much about guns. For me, its a political dead end. The reason is pretty simple: gun people love their guns more than just about anything. They're  one of the most dedicated interest groups in America today. Not only do attempts to regulate not work very well, they almost always backfire. [sic]

Meanwhile, though gun culture has a seriously problematic relationship with race and gender (e.g. George Zimmerman), gun people seem mostly harmless. My conservative cousin is in the NRA and, politics aside, he's a very nice man. In my experience, open carry gun people are socially awkward, economically stressed, working class white guys who fetishize a particular (f'd up) technology. For these folks, coming out to Open Streets to blink in the sun and enjoy mundane urbanism for a few hours is the best possible outcome. Picture a few carry permit guys emerging from depressing basements filled with boxes of ammo and old calendars, venturing from bunker'd exurbia into the everyday world of an average Minneapolis street filled with people of all backgrounds on a beautiful summer day. The beauty of the city will smack them in the face like a shaving cream pie.


As Handguns are to Misanthropic Survivalist Culture, Bikes are to Urbanist Millenialism

Here's where the metaphor comes in. A while ago, I was talking to a couple people on the Minneapolis Pedestrian Advisory Committee about their work. They told me that being a pedestrian activist and lobbying for better sidewalks, crosswalks, and signal timing is difficult because pedestrians are such an un-sexy topic. It's odd. While everyone is a pedestrian at some point (even drivers have to walk to their parking spot), almost nobody deeply identifies themselves as one. We take walking for granted.

In other words, if you had a "Minneapolis Pedestrians" rally, nobody would show up. Nobody writes their congressman about being a pedestrian. Walking is not something that gets people very excited.
Frankly, the Pedestrian Committee people seemed a bit jealous of the bicycle group, the seeming ease at which bike activists showed up for meetings. For example, the Minneapolis Bicycle Coalition has been growing like gangbusters, and they're one of the main forces behind Open Streets. Bikes are politically powerful, bus stops are not.

It's not because more people ride bicycles than walk on their feet, its because bicycles have a particular emotional appeal to people.  People identify as bicyclists. Riding a bicycle through the city, being cut off, hitting a pothole, or going past the lake on a gorgeous spring evening changes people. Bicycling reconfigures your sense of the world. People become very attached to their bikes. They'll go to great lengths to improve bicycling in the city, and woe to those politicians who oppose them. In some cities, the bike lobby isn't a total joke.


If You See an Open Carry Gun Guy, Try to Smile 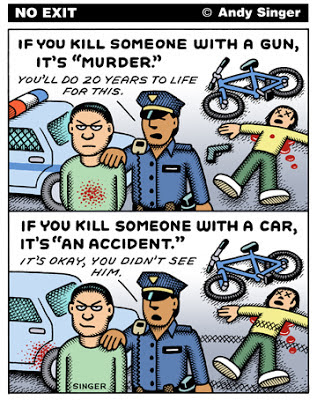 Ideally, I'd like Open Streets to be as inclusive as possible. Rubbing shoulders with people very different than you is what cities are all about. If you want to live in a place where everyone shares your taste, interests, and politics, move to Portland.

Each year in the US, about 30,000 people are killed by guns (including homicides, suicides, and accidents). By strange coincidence, almost exactly the same amount of people are killed annually by cars. (And that's not including the more diffuse public health effects of automobiles, e.g. obesity, asthma, etc.)

To me, Open Streets is about the diverse kinds of life that are possible when we remove the automobile from the center of our lives. It's not about everyone being forced to do yoga or ride bicycles. It's about revealing the potential of our public spaces, our streets and sidewalks. We're much better off in a world where even people that disagree with each other can co-exist in our public spaces. This means welcoming everyone, even if they have an idiotic gun strapped to their hip.

Sad but true, Bill, sad but true. Although I'd say the bike attachment is more about consumerist fetishism than experiential transformation. Certainly you can have transformative experiences on foot as well.

It's astounding that you didn't make a "pedestrian" pun.

This is a lighthearted and clever post, but I do find it a little perplexing that in the same few paragraphs you can point out that guns and cars kill a similar number of people, and yet say that you'd be happy to coexist at a carfree event with people with guns. If cars and guns are similarly deadly, it doesn't make much sense to say that "Open Streets is about the diverse kinds of life that are possible when we remove the automobile from the center of our lives....We're much better off in a world where even people that disagree with each other can co-exist in our public spaces". Why can we coexist with one type of danger (people carrying guns), but not with the other (people driving cars)?