All I Really Need To Know about Dinkytown, I Learned in Al's Breakfast 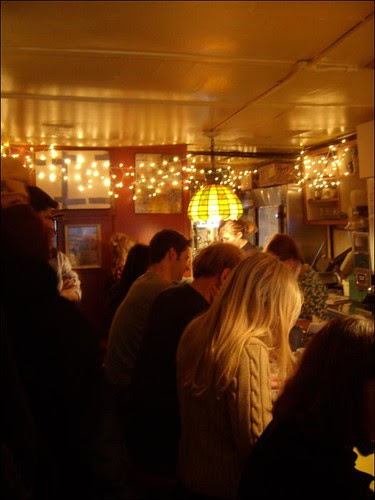 For a small place, there’s a lot happening in Dinkytown these days. The old high school that's been sitting behind the commercial area, serving as a business incubator and parking lot, is being redeveloped into a large mixed-use multi-story building. And there's a proposal to put up another big mixed-use apartment building on the mostly vacant North side of neighborhood's key block. The block currently houses a bunch of surface parking lots, two run-down homes being used for retail, and the 60s era one-story building housing the House of Hanson (a corner store) and The Book House. The proposals have sparked a lot of debate and opposition by the local neighborhood group and the area's business association.

I have been pondering this debate for a few weeks, thinking about how we might weigh the changes in the area. I was thinking about it so much that I went to Al's Breakfast last week. It was a cold day, so I got a seat right away. And that's when I realized that Al's Breakfast was the answer to all of my questions. I've written before about Al's unique social geography and opaque rules. Maybe Al's can teach us a thing or three about how to design a city. 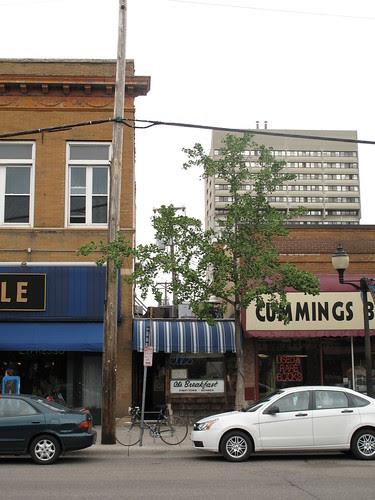 Al's Breakfast is rightly famous for being the smallest restaurant in the Twin Cities. The history of the spot is suitably complex, as Wikipedia describes:


The restaurant as it is today came into being in 1950 when Al Bergstrom parted ways with another neighborhood restaurateur. Bergstrom had gained experience at the griddle and in kitchen management in the 1940s while working for John L. "Jack" Robinson during summers at a popular Minnesota State Fair cafeteria. The Dinkytown building he purchased dates back to 1937 when a neighboring hardware store erected a shed in the alleyway to hold sheet metal and plumbing parts. This was eventually rented out and was a Hunky Dory hamburger stand by the time Bergstrom took it over. The new owner renamed the diner to Al's Café and first opened the doors on May 15. Initially, he produced three meals a day, seven days a week, but scaled back the operation to simply be a breakfast outlet after one year


At only ten feet wide, Al's Breakfast consists of 14 stools crammed into a tiny alleyway with a roof and a tiny kitchens in the front and back. There are series of rules about how to eat there (more on that below), and while the food is good, the experience is the real treat. (Picture eating the same food in a spacious strip mall Denny's. Oh, that's terrible. Stop!) So, on the one hand, Al's Breakfast proves that smaller can be better, that less is more.

On the other hand, Al's Breakfast also shows that more is more. The main take away from Al's Breakfast is that density is good for cities. If someone today were to suggest turning an alleyway into a breakfast café, they'd likely be met with all sorts of opposition. I'm sure that the building doesn't meet any code requirements, and it's likely that the alley would be a crucial access for something for someone. I doubt it'd get built. But back in 1937, these kinds of rules weren't so important. Dinkytown has always been a place where every last square foot of space came at a premium.

Al's is a good example of how you can turn nothing into something. There are all kinds of similar opportunities in the Twin Cities, places you might put granny flats, or places to park a food truck. Minneapolis is chock full of underused spaces waiting for a good idea. Density is a good thing for cities. It keeps the streetscape alive and interesting, rewards them for walking. Let's fill those parking lots and remnant grassy knolls with more buildings and carts and pop-up action. Density is what makes a city worth visiting.


Lesson #2: People Will Do Almost Anything for a Unique Experience 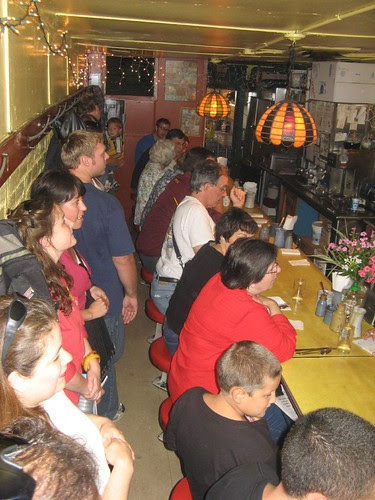 Q: How much money do you think Al's Breakfast spends on advertising every year?

A: Yeah right. The last thing they want is more people coming into their door. (Although, they do have a Facebook page.)

Going to Al's is tricky because you are continually placing your morning into the hands of a stranger. (I once tried to take a friend to Al's before his flight out of town. That is living dangerously, friend.) You have no idea before you head to Dinkytown whether or not Al's is going to have four open seats or a line out the door.  But this just shows you that Al's proves that people will do just about anything for the right kind of urban experience. And people do.

The way that Al's works is that once the 14 bar stools fill up, folks begin standing in line, queuing up in the tiny space behind the stools. It's like a crowded bus with food. The patient queue (who must move all the way down) stand behind the people eating, and watch the backs of their heads until the right number of seats opens up. (Sometimes this requires one of the famous Al's Breakfast "shifts", where some of the people move up or down the bar stools to consolidate empty bar stools.)

The point here is that people will do just about anything to eat at Al's. They'll endure waits and discomforts that Perkins can only dream about. (St Paul's Blue Door Pub is a similar packed 'stand and wait forever' example.)

People waiting at Al's is just like people parking and walking to an interesting part of the city. If you focus on making your city or neighborhood exciting and unique, filled with activity and density, then people will go out of their way to travel there. If you make a neighborhood interesting and alive, people will park and walk for significant distances to arrive there. They'll pay more, work harder, and commit themselves just to be somewhere truly urban. People waiting for a half-hour standing behind stools at Al's don't really get bored, because there's so much to see, and so much free eavesdropping available. In the same way, people strolling down a vibrant urban street because they parked six blocks away won't get upset as long as that street is truly alive, interesting, and has quality pedestrian space.

So many city battles are fought about parking spaces, particularly on-street spaces in front of stores. What's interesting to me about Al's Breakfast and Dinkytown is that the on-street parking spaces are usually available. The meters here still charge only $1.25 / hour, which is very cheap for a precious spot on one of the city's most in-demand corners. The reason why on-street parking isn't a big deal here is that the majority of the market doesn't drive. There are thousands of people who live nearby, and Al's Breakfast is rarely short of customers. Most of the people who eat there walk or take the bus, and the last thing that Al's needs is off-street parking.

The first thing to note here is that Al's independence from parking can be an example for other areas. Anytime a city trades a surface parking lot for housing units, you're exchanging a flexible commodity (parking) for a fixed population of future customers, people for whom your store or business will be the first stop out the door. Provided you've invested in comfortable interesting sidewalks, the more density you get in your neighborhood, the more business you'll have. A good example is the development going up on Snelling and Selby Avenues in St Paul. A large off-street parking lot is being replaced by over 300 new apartments. If you think that each of them will have one or two people, that's hundreds of new customers for the corner, people who will spend lots of time and money in the area. I wish area businesses would look at this in a positive light. Instead of seeing a new development as a loss of parking, why not see it as a gain of local customers (the most loyal clientele anyone could want). 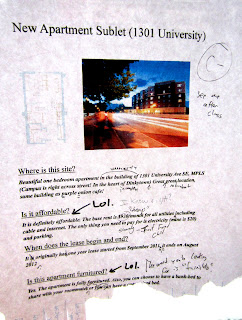 The second part of the parking situation has to do with off-street parking requirements. One of the main problems with any new developer building in Dinkytown is that the University area has onerous parking requirements. While commercial businesses in the area don't have to provide minimum off-street parking (it's in a pedestrian overlay district), any new residential unit has to have off-street parking spaces on a per-bedroom basis, rather than a per-unit basis. Basically, what these parking minimums do is drive up the cost for students trying to find housing, while providing space for cars far beyond the actual demand. Most students don't have cars, but if you provide them with a mandatory parking space, they might be more tempted to get one.

For example, here's a flier I saw on a campus bus stop the other day, advertising an apartment in one of the new Dinkytown area buildings. (It's the new building that houses the re-located Purple Onion.) The flier had been hilariously "graded" by undergrads.

Forcing students to pay for parking in the most walkable part of the city, where you least need a car, is not a good idea. The University / Dinkytown area parking requirements  incentivize driving in the area, making traffic problems worse for everyone. There are plenty of parking ramps all around the U. If on-street spaces were priced appropriately, maybe people would start using those ramps. My  advice would be to focus on the streetscape and the vitality of the neighborhood, use smart pricing, and parking will take care of itself.

I went to the U of MN for a year back in 1996 as a post-secondary enrollment student. I remember the Dinkytown from those days, with the divey Purple Onion on the corner, filled with smoke, seeming like the coolest place on Earth. Years later, one of my first memories of going out to see a show in Minneapolis was at the Dinkytowner, a basement bar if there ever was one. The bar was actually padded, so that your forearm wouldn't get sore as you sat there and drank all day. They had an intimate stage, and I have fond memories of going there to "watch movies" and drink pitchers of beer.

The thing is, in retrospect, neither of these businesses was unique or irreplaceable. Both were unkempt holes in the wall, and both got the boot by the ever competitive market economy. And that's the thing about Dinkytown. This tiny little corner of the city is a hotspot of demand, practically off the charts. There are literally tens of thousands of customers walking and biking and taking the bus through this area every day. That's not something you can say about anywhere else in the city, outside a few corners in downtown Minneapolis.

But Dinkytown might be the future of Minneapolis. More and more people are living like students: living alone, demanding smaller apartment units, not owning or not driving cars. Demographics, economics, and cultural shifts mean that the kinds of developments in Dinkytown are a sign of things to come. Replacing a surface parking lot with a multi-story apartment building is a win-win situation for everyone.

I believe that if more of our city was like Al's Breakfast, we'd all be happier. I was there last week, and got the corned beef hash with poached eggs on top. ("I need CBH over here!" shouted the cook.) I would have stood in line for a half hour for the chance. It was delicious, but the real treat was the urban experience. That's priceless.

Bill, you prove again that you're the Great Articulator.

the AL's breakfast picture( the one with people waiting behind the stools) makes me think about a busy restroom in a mall....LOL