The Anti-Bicycling Media Frame Dates Back to 1869 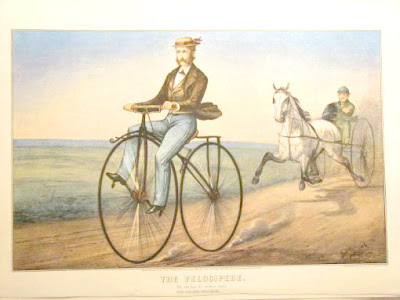 In 1869, a Yale student named Karl Kron fell in love with the new velocipede (a very early form of bicycle). He began riding it all through the city of New Haven, until an incident one afternoon on Dwight Street. His story, according to Woodforde’s concise well-illustrated history of the bicycle, is this:


He noticed an old white horse, hitched beside the road, showing symptoms of fright. He dismounted at once. But though the animal was about fourteen yards away, it continued to be actively frightened. It writhed about, made a vain attempt at impalement on the hitching post and then threw itself down. However, it was soon brought to its feet again by some men who ran out of an adjacent carpenter’s shop and appeared to have no injuries. The owner came up. Kron expressed his regrets and offered a payment to cover the probably cost of repairing a wheel of the car to which the horse was attached: two spokes had been broken in the horse’s attempt to kick itself free. The man accepted a dollar with apparent satisfaction.

The next morning Kron was hailed by an acquaintance with the news that the police had been visiting all the velocipde rinks to arrest the student who had scared a horse; and on returning to his lodgings at noon he found that official enquiry had actually made for him there.

He went straight away to the police headquarters and was told by the chief that there was no intention to arrest him but that, as a favour to the owner of the horse, a broker and a general agent called Rosenbluth, he had instructed some of his men to find out the identity of the velocipedist. Kron went away to find Rosenbluth and ask what might be wanted. The latter said a large swelling had appeared on the spot where the horse had nearly run the post into his belly; he valued the horse at 150 dollars and would hold Kron responsible if it died, which seemed probable. All the same, he would accept a tender of 50 dollars in lieu of all prospective damages.

Kron did not jump at the offer. Instead he divided the sum of four dollars equally between a vet and a lawyer. The former, having examined the horse, expressed the opinion that its market price was not above 50 dollars, even without the swelling, and that this might soon disappear – as in fact it did. The lawyer advised him that he could not be responsible for any penalty. (30-32)

This is Kron’s version of events, and I’m sure it paints him in the best possible light. The incident almost devolved into a heated court battle, but Rosenbluth backed down when his horse turned out to be fine. Frankly, both men sound like jerks. But the interesting thing about this incident isn’t whether or not Kron frightened a horse, it’s what happened next. A New Haven newspaper reported on the story on the 26th:

“On Wednesday, a student riding a velocipede, in attempting to cross a street in the upper part of the city, ran into a horse, throwing the animal down, and in attempting to rise the animal breached himself, and it is expected that he will have to be killed. The owner considered him worth 300 dollars, and calls upon the Junior for that amount. So much for the velocipede mania. We expect items of a similar character daily, soon.”


As Woodforde tells it, this meme got picked up by papers all over the country, “telephone game”-style:


It was just the sort of story all newspapers were eager to print, especially as it involved a young man at the famous Yale University; and before long there was hardly a city between Bangor and San Francisco whose paper did not give it a show. One paper boiled down the incident to a single line: “A New Haven velocipedist ran over a horse and killed him.”

It led to a few bans on riding the velocipedes on the sidewalks, which was pretty much the only place that the clunky iron wheels would work. 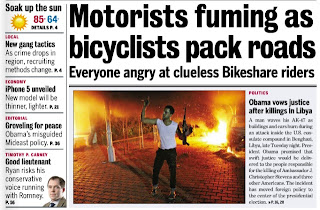 I've written before about how frustrating it is when the danger of bicyclists is overblown and turned into a menace. Journalists will often portray bicycling as some sort of threat to urban safety, or as undermining the effectiveness of automobiles. These stories turn into wars of dignity attrition between the bicycling and driving public, and don't push forward any dialogue about how we can better design our roads.

I guess I shouldn't be too surprised that slack jawed journalism is nothing new, I'm just surprised that it's as old as this.
Posted by Bill Lindeke at 9:26 AM