[This is from two years ago, but it's happening again!] 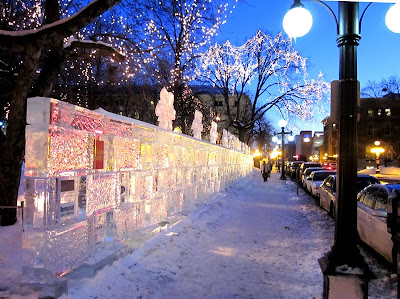 There are only two things you can count on in this world of Twin Cities' sidewalks, only two certainties in this pedestrian life.

In both cases, you can count on the fact that the streets will be deserted, that if you choose to take an stroll or an amble, you'll find yourself lonelier than a Utah barista.

But I suppose that for every rule, there's an exception. And, despite all the Vulcan misogyny and beer-addled firetruck destruction, despite the hokey mythology and the mafia-esque back room culture, the Saint Paul Winter Carnival manages to do the impossible and get people to stroll around downtown Saint Paul in the wintertime. It's like going to vote and finding out there's more than one gay black Republican on the ballot.

You'll find the sidewalks of Rice Park undergo a magical transition for this brief week of the year, becoming a fairyland of ice mystery and snowy phase transitions. And most folks that aren't necessarily into seeing Klondike Kates or wandering around parks early in the morning searching for a tiny disc, go to the Winter Carnival purely for the ice. 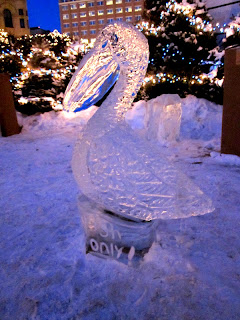 You see, ice is made out of water, that most mercurial of elements.* Ice forms in the winter time, when somehow, through the magic of molecular chemistry, water not only freezes at a reasonable temperature, but expands when it does so, creating the most interesting and dynamic potholes and artistic opportunities. Ice becomes larger, solid, and transparent, an impossible trifecta that leads to eerie glimmers and barely perceptible glances when combined with colored lights and numb wintertime cheeks and Victorian architecture in the crepuscular night.

The magic of ice means that Rice Park becomes a Midwestern Narnia people'd with magic wells and animals and dancing mythological beestes who hide amidst trees, whose crystal outlines are just glimpsed in reflections and bending light. 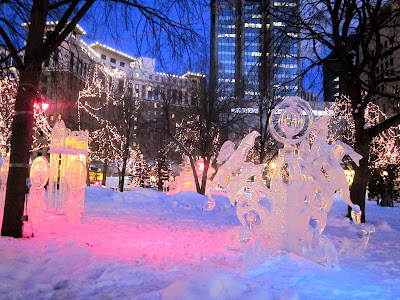 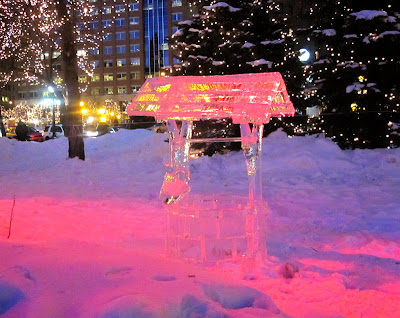 ["What is that, you ask yourself," as you squint to make out the outline of a leaping stag or a god or a wishing well with a pail just perched on its edge.]


And what's more, the sidewalk across from the Ordway changes too, growing a six-foot wall of icy history on its side, light shining through bricks and blocks framing smiling black and white Saint Paul people. Its like Mancini's crossed with Maxwell's after that February fire if all the old Herb Brooks photos had been frozen. 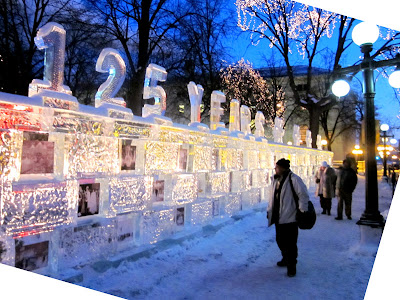 [A Rice Park passerby wonders to himself how many years the Winter Carnival has been around.] 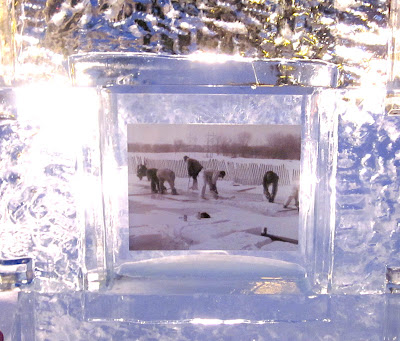 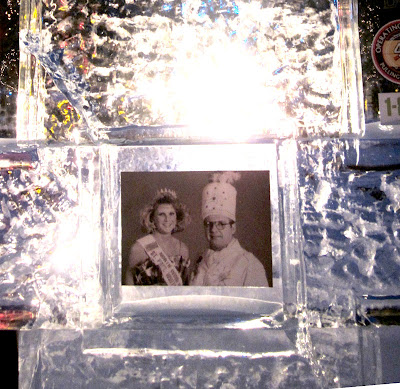 There's even an ice bar on which you can lean your elbow and a pair of icy thrones. Somehow nothing feels more satisfying than standing or sitting or resting on solid ice. Perhaps its the knowledge that, if only it were a bit warmer, this ice would be water and you'd be swimming? Perhaps this explains the appeal of ice fishing, which has long been for me rather a mystery (apart from the beer drinking).

But for whatever reason, for this mid-winter moment the Saint Paul streets are people'd with ice and statues and the breath of a hundred wandering visitors just learning how to skate. 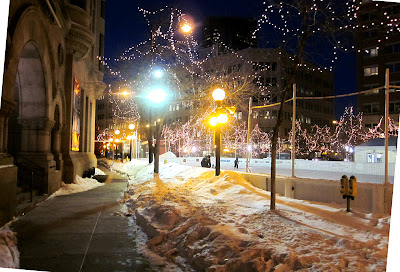 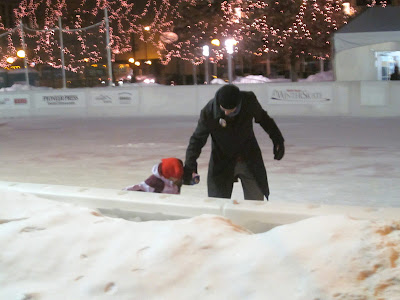 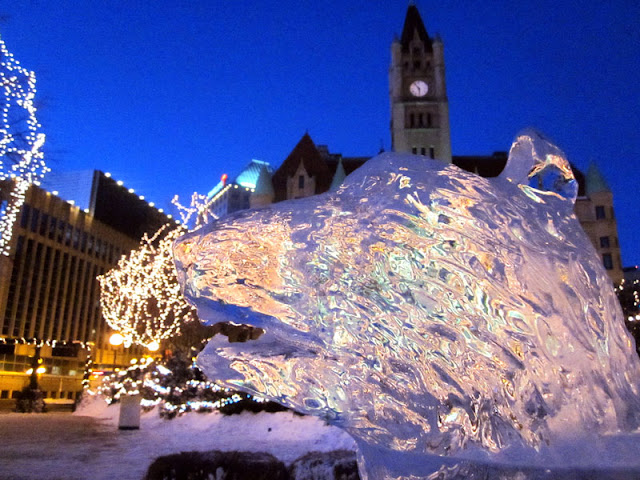 [An ice bear on the sidewalks of Saint Paul's icy Rice Park.]

* Note: water is not an element. Also, mercury is probably the most mercurial of elements.
Posted by Bill Lindeke at 9:44 AM