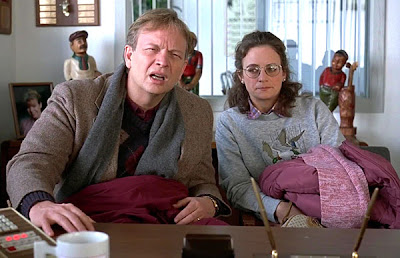 Howard Mohr, who literally wrote the book on being Minnesotan, had this to say about arriving in our fair state:


When you travel to Minnesota, I hope you're not expecting to be met at the border by a bunch of hyper people in colorful clothing. Our black-and-white signs at the state line say it all: MINNESOTA. If a smiling group of people with colorful clothing does meet you at the border, lock the doors and don't get out of the car. They're probably escaped from someplace

Minnesotans do not favor the big hello. We do it, we just don't overdo it.

The tendency to keep one's reserve, not make a scene, and remain unflappably friendly at all times is known round these parts as "Minnesota nice." I'm sure you've heard about it before.

Let me go out on a limb and say that it's a problem.

One of the unique things about the Twin Cities (in particular) and Minnesota (in general) is the unique mix of economic quasi-dynamism and long-standing geographic isolation. Most economically successful places are filled with flows of newcomers and migrants. Think of an East Coast or a Western boom town.  Minnesota, not so much. Most people who live here are from around here, go back a few generations. This makes the Twin Cities' a bit special, a bit eccentric, and a bit socially awkward at parties. At best, it can lead to unique cultures and strong social traditions; at worst, it creates a parochial wilderness invulnerable to change.

This is all well and good if you're from here, if you're one of the people who participates in these traditions, knows the in-jokes, and has a network of enemies and friends stretching to the horizon. But if you're new here, just moved from a more culturally dynamic, open, and (perhaps, gasp) confrontational culture, Minnesota can be a tough row to hoe. It can take a long time to make friends. If this goes on for too long, you might find yourself plotting a move to Orlando or Portland (depending on your hip/square orientation), and the state will have lost an opportunity.

See, Minnesota Nice has a downside too. The very things that make it easy to get a jumpstart or talk about the weather in the elevator, make it difficult to make friends.

With that in mind, here are three easy tips for breaking free from Minnesota Nice:

1. Talk to a stranger

See that person at the bar, bus stop, or café? That person who is alone and looks vaguely bored? Go talk to them.

I know this goes against every fiber in your being, but you can do it.

Here's a key: Don't overdo it. If they don't want to chat with a stranger (maybe they're from Minnesota, too), don't force the issue.

Often, however, you'll end up having a conversation. Usually, it'll be boring and uneventful. But sometimes, every once in a while, it'll be surprisingly pleasant. Isn't that what life is all about?

OK. You talked to someone you didn't know, and it wasn't terrible. You didn't completely loathe the experience. You weren't irredeemably bored. Good! That's progress.

Let's say that the person you met (and with whom you might even have enjoyed conversing) has just moved to the Twin Cities from another city or country. Let's say that they don't know very many people in town. The thing to do here is to invite them over to your house for dinner. (Alternately, you can invite them to dinner at a restaurant.)

I hear that in other sociocultural milieu, this kind of behavior is quite common. This little gesture can make a huge difference in the life of the newcomer. You'd be surprised how often, years later, once the person has found real friends, they will still remember this kind of gesture and comment on its importance. And maybe, just maybe, you'll be one of their real friends too.

The problem with Minnesota Nice and its repression-inducing rules is that it can keep our cities from being truly urban places. Cities should be places filled with the comforts of strangers, places that rely on a fertile combination of anonymity and security to create new and exciting social explosions. This kind of dynamism requires a continual churning, an influx of new people. Urban dynamism needs chance encounters. As long as we're too polite to break the ice, Minnesota is going to justify its reputation as a place where its difficult to make friends.

So why not try out these three easy steps, and see if you too can say a long Minnesotan goodbye to Minnesota Nice.

This post invites debate over the original meaning of "Minnesota Nice," which is a nice way to say, "passive-aggressive."

But it also reminds me of how much fun it is to take your advice. I was recently talking to strangers in Guatemala about Canadians (they were a Mexican woman and a Frenchman who lived in Montreal).

They had hilarious stories about never being invited anywhere by colleagues, except for parties that were "bring your own beer... and meat."

Everyone else knew the rules that you didn't touch anything you hadn't brought yourself, but had to go empty a couple times to catch on.

(someone had to say it)

so the minnesota nice Jokke told me is not the real " Minnesota Nice". Thanks for the fact!!

There are a lot of ideas here that would make our state a better place for newcomers and oldstayers, but I'm curious: Where are these places where strangers (I mean, friends who've just met) are constantly inviting each other over for dinner? That isn't something I recall from Boston or New Jersey or Silicon Valley. It's actually been more common since I moved back here.

Maybe that's just because I'm more charming now, but also I think we in Minnesota tend to exaggerate our uniqueness. Just as the California Stop is also the Michigan Stop and the Rhode Island Roll, I think leaving people alone is actually really common. We think of it as Minnesota Nice because we have a hangup about Minnesota Nice (and I'm not denying there's a real thing there), but what if it's just how people are?