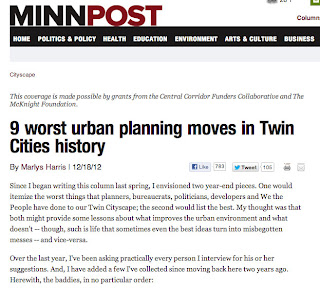 I was delightfully surprised yesterday to read Marlys Harris' Cityscape column in Minnpost, entitled "The 9 Worst Urban Planning Moves in Twin Cities History." Not only was Harris' list spot on (except for her Trader Joe's fixation), but the list completed some unfinished business that's been on my agenda for going on fifteen months now.

What seems like forever ago, teaming up with my good friend at Getting Around Minneapolis, we'd launched a Top 10 TC Planning Blunders of All Time series, calculated a definitive list, and started to catalog them. We got through 4 of the 10, before getting waylaid by circumstance and inertia...

Regardless, Harris nicely filled the void left by our sloth and ineptitude. Her list hits on all my favorite gripes: the skyways, Hiawatha "Avenue", Block E, and neighborhood NIMBYism...

The discussion that follows on the comment thread is enough to leave any urbanist blogger (sustainably) green with envy, a variously pleasant and bitter debate over freeways and skyways and 'my ways or the highways.'

SUBMITTED BY LEE WENZEL ON DECEMBER 18, 2012 - 12:45PM.
So is "Twin Cities" limited to Minneapolis and St. Paul, or is that merely where the fiascos occurr?

It's a good question. Why are all the disasters located in Minneapolis and St Paul proper? Aren't there any planning blunders in the suburbs?

It got me thinking about how to include the suburbs in Harris' list. What would happen to this catalog if you tried to include things like 494 office parks, endless Woodbury culs-de-sac, or the Vadnais Heights (albatross) sports facility?

And how do the suburbs rate on those criteria?


#10 Worst Planning Move in Twin Cities History: All of the Twin Cities' Suburbs

Yes, you read that correctly. No list of the Twin Cities' planning disasters would be complete without including on that list all of the Twin Cities' suburban development that occurred after about 1952. And that describes pretty much everywhere that most people live, outside of Minneapolis, St Paul, a few of the inner-ring suburbs and some scattered dollops of our older built environment. (Granted, there might be a tiny tiny fraction of that suburbia that has some decent urban qualities, but its safe to say that 99.5% of this development is worse than anything you could find in the Minneapolis or St Paul proper.)

By every measure of good and bad urbanism, every suburb in the Twin Cities lacks walkability, decent transit access, density, and financial sustainability. When you throw in the subsidies like the Mortgage Interest Tax Deduction, Federal freeway investment, accelerated depreciation, subsidized sewer and road investments, and the occasional TIF district, most every suburb in the Twin Cities would make Block E look financially sound.

I was talking with a urban planning colleague last night about Harris' list, and he was upset about the fact that criticism of projects like Block E threw a bad light on Minneapolis development deals. Calling Block E a disaster, he argued, made it easy for people who supported suburban development patterns to stereotype the central cities as development quagmires, corrupt places where good money goes to die. This, he argued, was not helpful...

He makes a good point. Any discussion of Twin Cities urban planning blunders needs to be considered in the larger context of American suburban sprawl. Any discussion of Block E or the Hiawatha Avenue design should keep in mind that, as bad as they are, they're still better than the vast majority of suburban land use. As bad as the Gateway or downtown St Paul urban renewal were for the city, those places are still vastly more walkable and sustainable than anywhere in Apple Valley or Elk River.  As bad as the Minneapolis skyways are, they're still much more "urban" and "public" than the Eden Prairie Mall or Richfield's Best Buy HQ. As bad as University Avenue's big box district might be, next to Plymouth or Eagan it looks like pedestrian paradise. And let's be clear, South Minneapolis NIMBYism has nothing on Edina.

So. With that in mind, I suggest an addendum to yesterday's Minnpost list. I submit that no list of Twin Cities "urban planning disasters" would be complete without including the vast ring of unwalkable autocentric sprawl that surrounds our cities like a sick yoke. Congratulations, almost all of Twin Cities suburbia. You just made the cut!
Posted by Bill Lindeke at 12:23 PM

Awesome work, So here is an amazing font that will help you to design coolest designs.