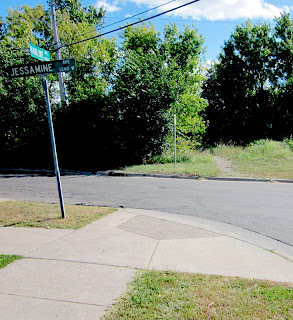 “Desire paths” are the interesting name that urbanists give to the little dirt trails that form after people walk ‘off the sidewalk’ enough times to create these kinds of patterns. You’ve probably seen them ‘cutting’ between two corners in a field, small dirt trails that show you where people have boldly gone before. They’re so interesting to me because represent the coming together of failure and triumph, the failure of planners and street designers to both adequately predict where people would walk (and where to build a sidewalk) and the failure to control the pedestrian population through architectural or fencing means. At the same time, they represent a triumph of the common walker, a sure sign of someone successfully finding the shortest path between two points, of someone taking the short cut or the road less traveled or a group of people spread through time making their own way into the future. At any rate, I get excited when I see them.

And its not very often that you see a desire path while walking around St Paul. The city, like most cities of its late 19th century vintage, is pretty well sidewalk’d. In most places, there’s not much call to do it yourself.

Except by the train tracks. St Paul is split East-West down the middle by a pair of well used train tracks, and so for pedestrians and cyclists, getting from the South to the North sides of the city can be a tricky pickle. Not a lot of streets go over the tracks, and the ones that do (like Snelling or Dale or Lexington) are filled with fast moving cars and leave little space for either bicycles or people walking on their feet.

So people make do with what they have. Hamline Avenue is a great example of this. Technically speaking, Hamline Avenue does not “go through” over the railroad tracks. It stops at one end at a pedestrian bridge by a busy quasi-freeway called the Pierce Butler Route, and at the other end by a little-used street called Jessamine. In between are two sets of busy double railroad tracks and Bandana Square, a cul-de-sac filled suburban style housing development in and around an old railroad station.

But, if you desire it strongly enough, Hamline Avenue does continue over the railroad tracks. You have to squint, clutch your hands into tight fists, and wish with all your heart, and voilà! Hamline Avenue will appear before your eyes. 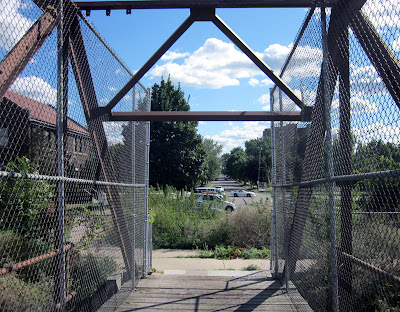 [The end of Hamline Avenue looking South from the caged pedestrian bridge that takes you over the railroad tracks.] 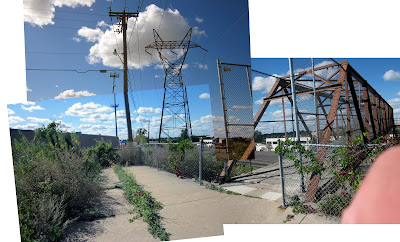 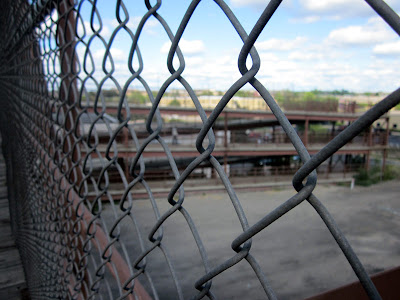 [The Hamline Avenue pedestrian bridge turns into a very long and ugly switchback ramp that crosses over itself no less than three times at the North end.] 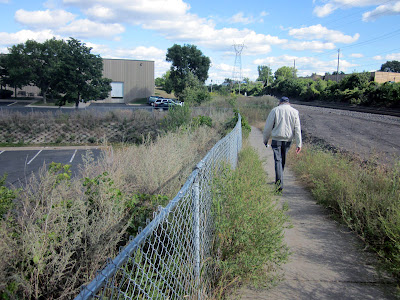 [At this point, Hamline Avenue turns into a sidewalk running between the train tracks and a fenced-in parking lot for a light industrial building.] 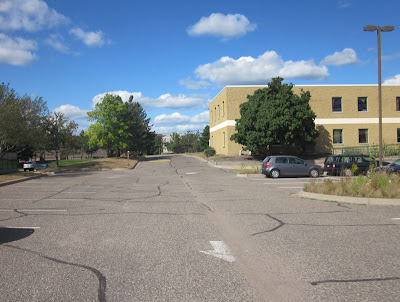 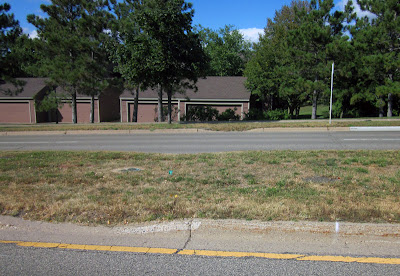 [After walking through the parking lots, Hamline Avenue continues invisibly over the Energy Park Drive. The only sign of Hamline here are these two or three little depressions in the boulevard curb. It's like being almost lost in the woods, but finding just the hint of a trail before you.] 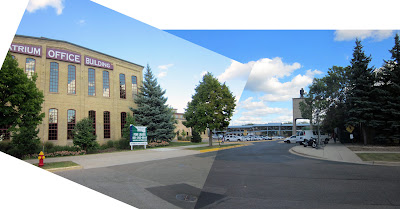 [Hamline continues through a labyrinthine series of sidewalks, buildings, garages, culs-de-sac, and parking lots. It's easy to lose your way in this maze. Remember to use the sun and stars as your guide, and to always head North.] 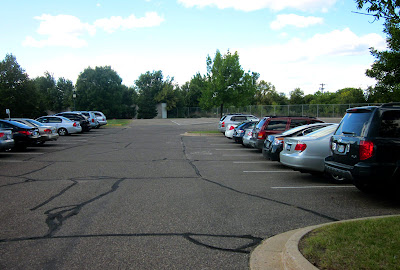 [Eventually, those that desire Hamline Avenue will find this parking lot. It looks just like all the others, but it contains the keys to a lost civilization, a lost sidewalk, a lost Avenue running through the palimpsest of tracks and tree.] 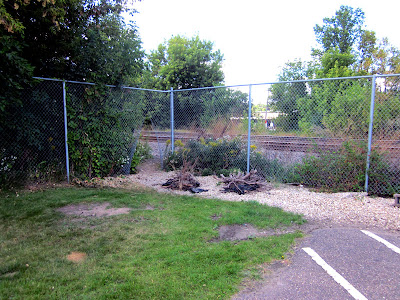 [This fence marks Hamline Avenue. A neat hole has been cut into the fence. It opens wide and leads you onward, offering you shelter and protection as you find your way forward.] 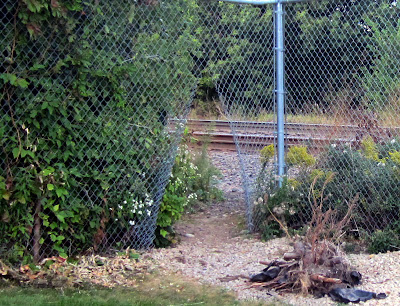 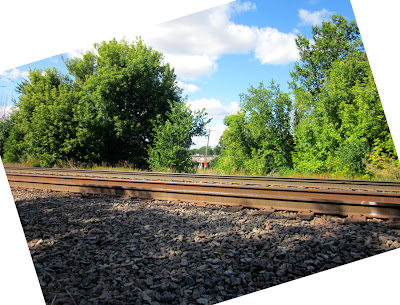 [Though you cannot see it, Hamline Avenue is here, winding its way over the twin steel tracks for trains.]

[On the North side of the tracks, Hamline Avenue appears again, taking you out of the safe South side of St Paul into the mysterious North.] 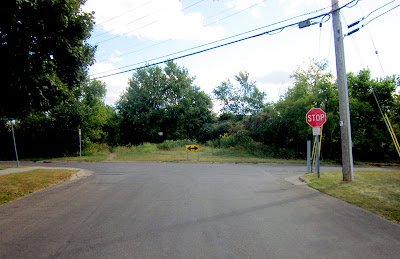 [The view of (desire) Hamline Avenue from its Northernmost edge. To the trained eye, the street appears almost like magic.]

You have successfully found your way to my neighborhood. +1UP!

I have a theory that this is why Bandana Square died, although could have only been one of many reasons. It would have been a better place if people staying at the hotel could have gone straight north to get to Como Park (though it's still a small hike from there).

When I went to one of the meetings about the Snelling Avenue resurfacing project, a lady said that the bike/ped tunnel next to Lexington Avenue was supposedly pawned off by the city as the official connection to go north across the tracks. Yeah, I'm gonna walk a half-mile out of my way and back again. Uh huh.

I hope they build a better crossing here eventually.

Great find and nice article. Scanning Google Maps I can't believe it's a mile from the crossing at Snelling to the crossing at Lexington. Way too far to cross tracks in the middle of the city.

Yeah, I think it's crazy. It's even farther between Snelling and Raymond farther west. I look at envy upon the roughly 1/4-mile spacing of crossings over I-94 just a few miles south...

Dude! I love this article. The street continues, just not in its normal form...

FYI, I used to work in the building immediately adjacent to the North terminus of the pedestrian bridge you cited. We would often take walks in the afternoons across this bridge and into the little neighborhood south of Pierce Butler. There's an excellent community garden there!

first time to go far from our town together, first time to go to beach with friends and first time to cook smores with bonfire! It was truly an incredible experience for us to remember for the rest of our lives! Hopefully we could do this annually every summer! Can't wait for our next adventure! ♥ vinyl chain link fence