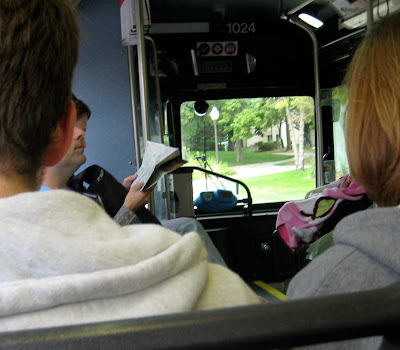 [A new student breaks out the campus map on the first day.] 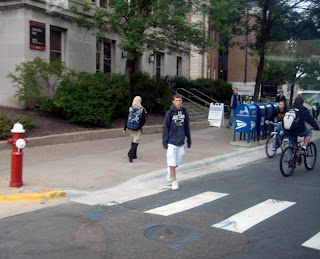 So, provided you're not a total misanthrope, this time of year is always a fun time to be on a university campus. Biking, walking, and riding the bus around the University of Minnesota these days, its so interesting to watch the new crop of thousands of fresh-faced undergraduates get pushed out of their parent's SUVs, into a dorm, and into urban life for the first time.

I remember the exhilaration of my first year of going off to college. You live on your own for the first time. You have your own space that you can do whatever you want to. There are tons of people your own age (girls!). But probably the most important thing, the thing that's the most different, is that you completely control your own movement through space. If you want to wander all around the school for the evening, you can. Want to hang out in the grass for 2 hours for no reason? Feel free. You run into some friends on the corner and follow them and nobody cares one way or the other. There are things to see all around, and an endless stream of people and choices and restaurants and sights and smells … 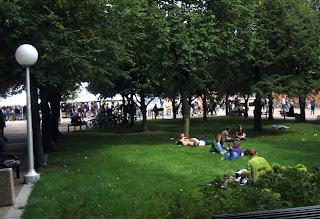 A lot of that excitement is the same feeling you get when you live in a city: the sweet surprise of a chance encounter, the flurry of the new. In a way, University campuses are very much small, dense cities. People live in small rooms, many kids to a house or a dorm. Colleges have the kind of density of jobs and housing that we used to have all thoughout the US a hundred years ago. Colleges almost always have teriffic transit systems (by necessity, rather than by choice), lots of bicycles, and (thanks to the frisbee) lots of street life. They're exciting places to be around. It's fun to watch new students try to figure out how to ride the bus. Its fun to watch the visible conflict between personal space and being on time play out on the faces of Midwesterners standing outside a crowded bus. 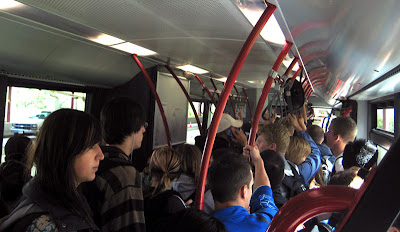 [OMG. I am sooo late. FML!]
Of course, as any visit to Penn State will quickly reveal, college kids don't always really know how to behave in public space. College kids get a bad rap, and, some of the time, they deserve it.

Maybe its the frat boys, with their public urination, loud parties, and kegs of terrible beer. Maybe its the persistent stealing of street signs, or the near-absolute-horniness level attained (understandable). Maybe is the riots and history of political unrest (sometimes understandable).

But to me, most of the time, they're pretty good. After all, most kids in America have never lived in a city before. Most kids (like me) grew up in the suburbs or in small towns, living in homogeneous homes and dealing with the isolation of the American landscape, and had precious few opportunities to explore the world on their own. Most kids have never lived in a city, and have never had the kind of experiences where you lose yourself wandering and wondering in a world that exceeds your understanding. Most places in America do not really make you into an interesting person.

Learning to live in a city, with other people, and to enjoy that kind of saturated experience is one of the most important things we can teach kids at school, and its a lesson they learn when they're not in class. They learn how to behave in a city, surrounded by other people who are different from each other.* And that's a good lesson to learn.** 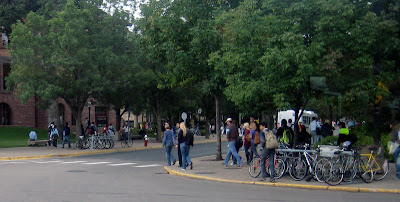 [The bustling sidewalk street life of the University of Minnesota's East Bank.]

* This is one reason why the U of MN is a more interesting (and well-behaved) place, than, say, Penn State, where just about anyone you meet is also a college kid. Campuses should be in cities, I think.

** One of the frustrating things about many schools, the U of MN very much included, is that they don't do enough to capitalize on all their density. While the NiceRide kiosks are a good start, there should be far more access for bicycles on campus. There are precious few easy bicycle connections between the University and the surrounding area, and hardly a good route East/West through the campus. For bicycles to be an afterthought on a campus a large and dense as this is pretty much unforgivable.
Posted by Bill Lindeke at 12:00 PM

Great post. It took me back to my first days of college exactly a decade ago. Moving from suburban twin cities to the heart of Chicago was probably more of an education than the classes I took. Exploring the city on the sidewalks, trains, and buses was enough to forever leave the "Most places in America {that} do not really make you into an interesting person."