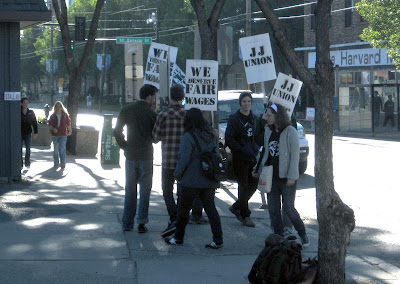 [Minneapolis Jimmy Johns' workers try to start the nation's first fast food union by walking in a small circle on Washington Avenue.]
Sidewalks and strikes go hand in hand, foot by foot. I saw the Jimmy Johns' workers picketing out on the street today in Stadium Village (though, oddly, not near any Jimmy John's franchises). They had taken to the sidewalk, and were making a tiny circle at one end of Washington Avenue.

For most people today, especially young people, this is a very odd sight. Not only are labor unions increasingly harder to find, but sidewalks are far less important than they used to be. Back when factories were located in cities, in places with a lot of foot traffic and a lot of 'presence' in the community, it had much more of an impact when workers went on strike on the sidewalk outside the building. People might see it, support it, etc. The broader population would know what was going on, and might be there for solidarity or added to place pressure against a misbehaving company, or simply to watch and understand the dynamics of labor and capital.

Well, as public space disappeared after the 1960s, and as factories and unionized workplaces moved into increasingly remote "industrial park"-like locations, sidewalk strikes became a rare sighting. It's hard to picket an airport or a car plant when they're surrounded by freeways in the middle of nowhere. Strikes were reduced to headlines in the newspaper, where they were at the mercy of the vagaries of our media.

Sidewalk strikes are a different thing. They allow for interactions between the workers and the public, and a sense of the reality of the people involved in the labor situation. You actually get to see the people whose lives are being affected by the labor dispute. The old model of walking in a circle might not be the best idea, but why not the striking workers chatting with people on the street, or setting up an 'information booth' of some kind that allows people to ask questions and discuss the pros and cons of the labor movement?

Strikes demonstrate one way in which public space is important for our politics and society. Without sidewalks, is it really even possible to get much traction and support out of a strike situation? 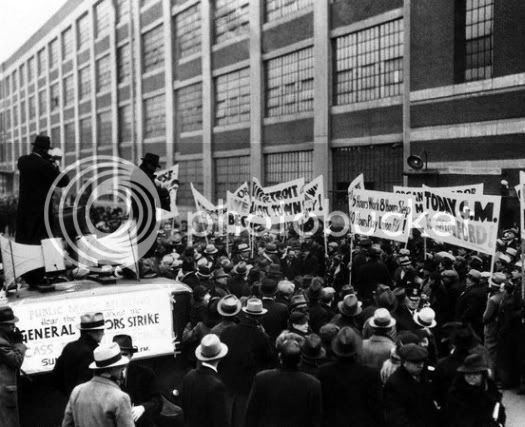 Flint -- Sit down strikers at the Cadillac and Fleetwood Plants here, led by a band playing "Hail to the Victors", march jubilantly from the plants after a truce had been declared permitting negotiation between G. M. officials and members of the United Automobile Workers of America. General Motors is determined however not to surrender exclusive collective bargaining rights for employees to the United Automobile workers. (1937)
This was posted by Tom Sutpen for the series: An Illustrated History of American Labor