Sidewalk of the Week: Stryker Avenue 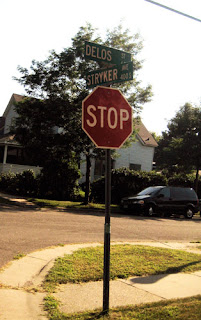 In a great many ways, Saint Paul just can't compete with Minneapolis. It'll never have the kinds of street life, the large number of young people, the entertainment districts, diversity of theaters, fancy architecture and art scene, the downtown economy, or the razzle dazzle image, etc,. etc. of its larger sibling. Saint Paul is destined to be the red headed stepchild of the relationship, hopping up and down and tugging on the Twin Cities' shirtsleeves just to get its share of attention.

But there's one thing that Saint Paul has in spades that Minneapolis can never, ever hope to attain. And that thing is topography.

Minneapolis is flat as a pancake. Its one of the things that makes it so good for bicycling. But Saint Paul, thanks to the geologic fact-ness of the Minnesota/Mississippi River valley, has tons of hills and valleys and bluffs. The Mississippi Valley and the Trout Brook valley each cut a great swath through St Paul, leaving the town filled with steep climbs and impressive hills and vistas.

One of the consequences of this is that biking in Saint Paul will really give your calves a workout. Another consequence is that neighborhoods in the capital city are a lot more isolated from each other, seprated not just by a freeway or a coffee cafe allegiance, but by a large ravine or hill or bluff or cliff or body of moving water. 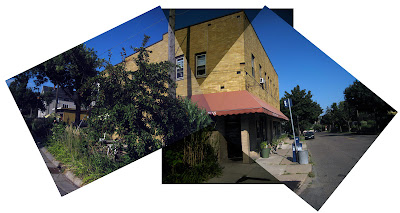 [Any visit to the West Side should include the striking sidewalk outside Jerabek's New Bohemian Bakery.]

[The streets on Saint Paul's West Side bluffs seem to just disappear off a cliff.]

And the most extreme example of this has to be Saint Paul's West Side, located high atop (and below) the bluffs South of Downtown. To my mind, the best place to see how impressive the West Side can be is to head down to Stryker Avenue as it nears the edge of the bluff.

The sidewalks on the West Side are filled with surprises. There is a kind of wildness to the west side that comes with topography. Yards are surprisingly hilly, and the sidewalks will often slant downwards or upwards against them, making a kind of 'step' motion against the horizontal homes. The yards extend downward into funny little sidewalk walls, often made of limestone or sandstone or some sort of other ancient sedimentary stone that nobody uses any more. These old retaining walls turn the sidewalks into a kind of historical layer cake, where you can literally reach out and feel the age of the city.

[The houses along Stryker Avenue jut out magnificently, and have the kind of rich detail that only comes with Victorian age.]
If you're close enough to a larger hill, the streets will just seem to disappear, as they extend out over a cliff like a Segway entrepreneur, only to fall to Saint Paul's river valley below.

And then you happen across these outstanding views of the city, and the vast Mississippi valley that curves through the city, and you get to see downtown Saint Paul from its good angle, buildings climbing the banks of the river almost as they were part of the cliff .

[The view of the river valley from Stryker and Cherokee Boulevard is amazing.]

[One example of a Saint Paul sedimentary sidewalk retaining wall.] 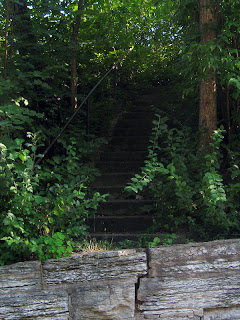 But the most surprising thing of all on the West Side is the hidden secret staircases. Saint Paul has a bunch of these secret sidewalks, tucked into the trees and bushes and climbing up the hills and bluffs, and they make for delightful little adventures for strolls. You'll be walking down a West Side hill, and all of a sudden there poking out of the trees is a staircase adventure waiting to happen. Where do the stairs lead? Where will they take you?

Oh, do not ask what is it. Let us go and make our visit. 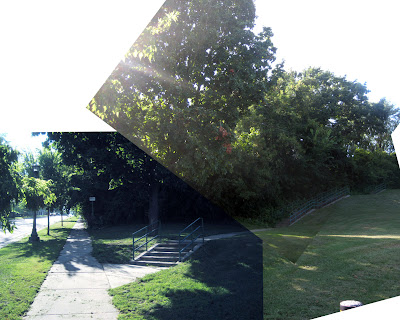 [Where does this staircase lead?]
Posted by Bill Lindeke at 11:55 AM

Minneapolis does a good job hiding our hills from visitors. If you're looking for some topography, check out the neighborhoods to the north and east of Columbia Golf Course. Check out the view of the Minneapolis skyline from the north side of Columbia and Audobon Park.

Or, roll over the hills around Dowling Ave in North.

I love this sidewalk surrounded by trees and fresh air, perfect to walk it on the weekend.

Crocus Hill and Ramsey Hill also have staircases in a few places, I've noticed. Kind of a cool like quirk of the City.