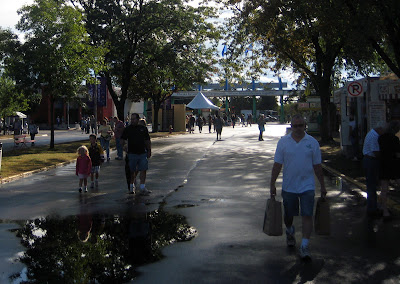 [I love the smell of Dan Patch Avenue in the morning.] 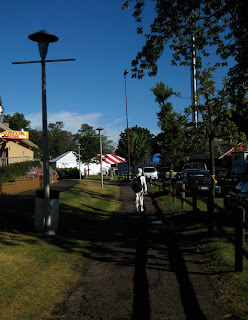 So much has been written about the state fair. Every year, everyone goes down there to experience whatever it is that makes the event special. Every year, journalists and storytellers and everyone around the water cooler comes up with their own explanations of why they go, what draws them there, trying to put their finger on that je ne sais quois something.

Everyone has their own reason: "Tradition"... The food... The rides... The bandstand shows... Seed art... Butterhead sculptures... Half-ton pigs... Crazy looking chickens... The horse show... The fireworks... The sock monkey dress... Ye Olde Mill... The butterfly tent... Seeing "faces for radio" at the booths... 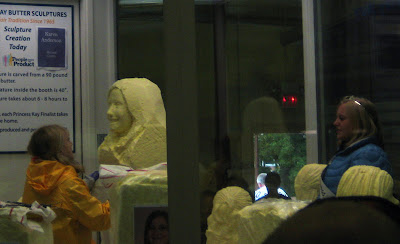 [Princess Kay of the Milky Way freezes in her buttery chamber as a dairy artist toils.] 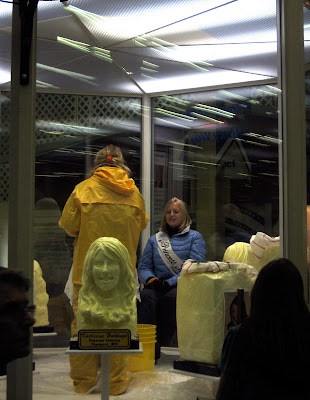 [Reminds me of Han Solo in Empire Strikes Back.] 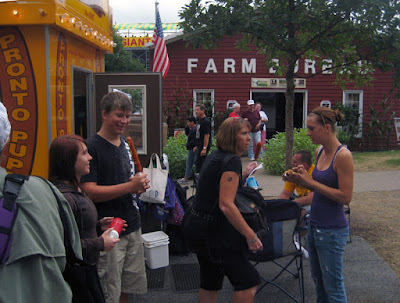 [The joy of the Pronto Pup, the original food on a stick.] 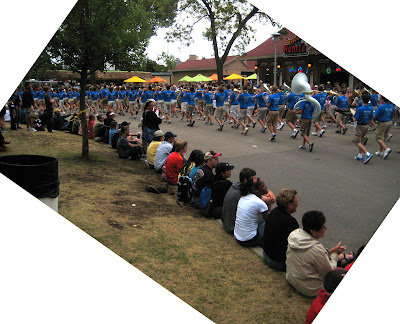 [Sittin' and watchin' the marchin'.]

All of those reasons are wrong. What really makes the state fair special is the sidewalks. Its one of the only truly car-free (carefree) experiences you'll really have in Minnesota. When you get to the State Fair, however you get there, however much of a pain in the ass it is to drive and park and walk for a mile, take the complicated bus, or bike through the density and chaos, once you walk through the gate and find your way to Dan Patch Avenue, you're free from worrying about cars. You've reached a pedestrian paradise, where you and 100,000 of your closest friends can wander around a truly fascinating urban scene on foot. And that's why people go to the the fair. 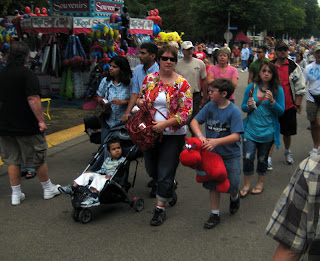 There are all ages and varieties of walkers. Somehow, fanny packs begin to make sense. Walking sticks and canes and motor scooters are everywhere. Old people, young people, parents pushing strollers, kids and teenagers fill the fairgrounds and wander down interesting lively street after interesting lively street. You have so many choices for walking! You can walk on the sidewalk, down the middle of the car-frees street, wander into the many beautiful plazas surrounded by benches and ledges and tables and bandstands. You can wander into and out of the many open buildings. In some ways, there's no difference between inside and outside. Meandering into the Ag building or the Dairy Barn is just like being outside. Those are sidewalks too, bazaars and booths and things to see and do around every corner. And every street is lined with booths and stands and vendors selling you terribly unhealthy pleasures, every permutation of street food imaginable (except for the world of asian seafood, somehow... no squid on a stick?). 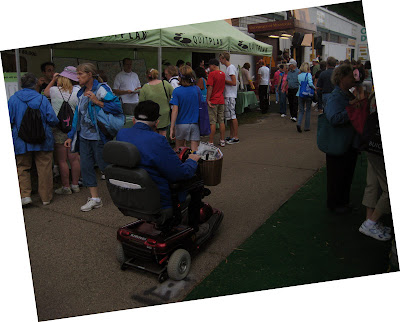 [An elderly gent contemplates whether or not to quit smoking while wheeling a motorized chair past be-shorted petooties.] 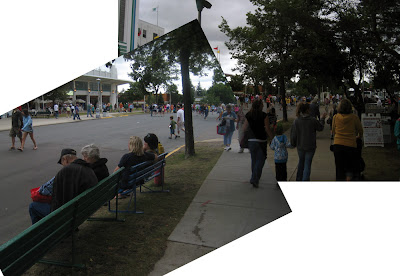 [Old folks and young whippersnappers over by the 4-H building.] 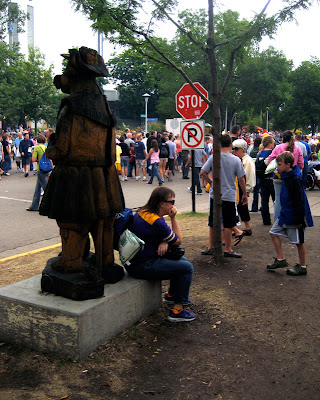 [The Thinker shares space with a well-dressed wooden bear.]
And I haven't even mentioned the people watching. This ancient art is probably the most interesting and rewarding pastime in the history of the human race. Watching other people, looking at them, seeing the great wide variety of types of clothes, hair, hats, and habits that Minnesota has to offer. Seeing farm folks and families and all the kinds of people you don't generally find in your neighborhood, and seeing all these people out and about on the street, walking past all around you, sitting and eating and playing and talking on the phone and yelling at their kids and the two ladies who spent the whole day looking for the “Gin Sue knives” and couldn't find them, and the guy who grew up in South Saint Paul and really wants to tell you about it, and everyone (for once) kind of willing to talk to strangers about the weather and the music and the crazy contraptions and concoctions and cuisine. 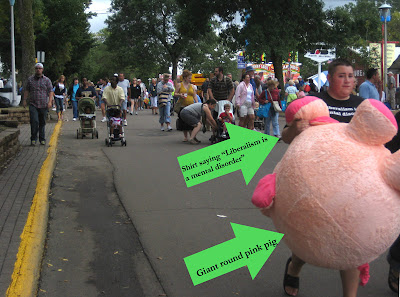 [Young Republican pursued by parents with strollers down Judson Avenue.]

[Sidewalk scene outside the Dairy Building.] 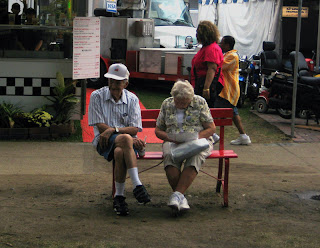 People watching is the currency of sidewalk life, and the State Fair is an annual gold mine. The State Fair makes Nicollet Mall during lunch hour look like a cold day in downtown Mandan. You'll not find sidewalks of this caliber this side of Manhattan. For most people, the State Fair is the absolute epitome of urban life (if bad for your cholesterol). You get home and your feet are sore and your brain is overloaded and you just saw 100,000 people stroll past you in a blur and you feel like you are part of something. You're part of a state that has community, a state with some sort of common identity, a state with a common place and common sidewalks that we all share, once a year, that we all turn to to walk past with each other, one big, fat, exhausted, overwhelmed, and finally quasi-vaguely-happy family (of sorts). Even when we don't agree (e.g. the liberalism is a mental disorder pig guy, anything having anything to do with Tom Emmer, or any of the old truck-driving farmers that I talked to about biking in the city while I worked at the Kick Gas booth that wouldn't touch Minneapolis with a 100 mile pole), at least we have the State Fair in common. At least we walk down the same street once a year and enjoy being together. At least we have the sidewalks of Dan Patch Avenue. 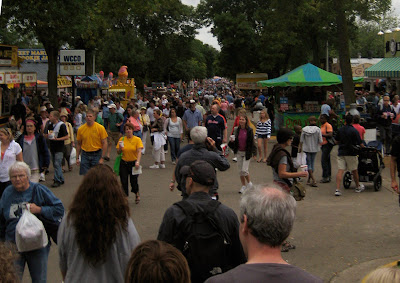 Awesome that you were at the Kick Gas Booth Bill, what day did you volunteer? I spent 6 hours at the Sierra Club booth, and half of the fun was people watching as folks walked through the Education building.
I am sure you saw the Tesla Roadster in the Eco-Experience Building, did your booth get a lot of traffic while you there?
Great post about "The Great Minnesota Get Together", but what's always sad is how barren it is after the twelve days.

yes, definitely a strange space the rest of the year.

i was there on the 9 - 1 shift on a friday, i think, the day it rained in the early morning but then became kind of nice.

that Tesla does indeed look awesome.