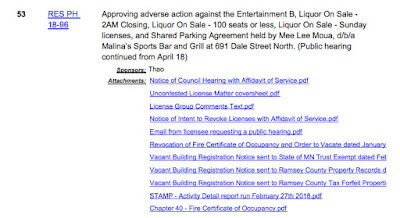 The unique Dale Street dive, Malina's Sports Bar, was on the City Council agenda last week, which is something that fans of dive bars never want to see. Malina's is one of the last remaining bars on Dale Street, which used to have a bunch of dives but has become more economically marginalized ever since half of Dale Street was bulldozed and the street expanded back in the 1960s.

Back when I living in Saint Paul's North End, Malina's was the most thriving place to go to hang out. The place was unusual, for sure. It was either very closed or very open, and you could tell which was which by just scoping out the parking lot. If there were a dozen cars there, then they were open. My roommate and I used to go there whenever we were bored to drink Beer Lao and watch the best karaoke in town. This was back in the day when a man named Vone owned the place, a guy who was already friendly towards us and often insisted on me singing Sinatra songs on the karaoke stage. 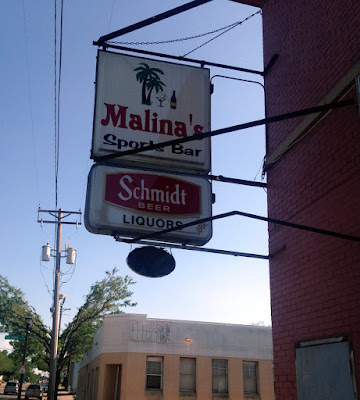 Here's an expert from my blog when Vone was shot, trying to close up the bar one night:


The other strange thing was that Malina's was either packed or empty. There was very little in between. About half the time you'd walk in to find yourself alone with either Vone or the woman I presume was his wife. She never really spoke to us, and did all the cooking. On the other hand, Vone was gregarious. He was the bartender/owner, and he seemed to like when we'd visit. He'd chat with us, always knew how long it'd been since we'd been there last. We'd talk in vague platitudes about the bar, the neighborhood. He told us he had been a social worker, but not a lot of other details. It didn't matter.

The bar was almost all young Hmong people from the neighborhood. I have one or two Hmong friends, and when I'd tell them that I enjoyed going to Malina's, they'd roll their eyes. "That's where guys go to cheat on their wives," one told me. Those dynamics were lost on me. All I noticed was the karaoke. I've been to a lot of karaoke bars over the years, but none of them could hold a candle to Malina's. The standards were high; there was a set of about two dozen 80s pop ballads, and you'd often see a shy looking girl wearing a sweatshirt take the stage and absolutely crush some Céline. "I Will Always Love You" was popular, and something about crying eyes, anything with gradually escalating key changes.  Usually Vone would try to get me to sing too, for some reason, and after a few beers I'd oblige with a crap rendition of some Sinatra. Nobody clapped for me, but Vone seemed to enjoy it.

I'd often bring people to Malina's who were visiting from out of town, you know, like from Minneapolis. Vone usually made us feel comfortable there. The food was good, too. Malina's served a few different kinds of larb (a meat salad), or you could get a plate of papaya salad for a few bucks. Maybe its my imagination, but Vone seemed to delight in making it as spicy as possible. I'd sweat for fifteen minutes after eating it. There were other things on the menu too that were beyond my degree of difficulty limit.

Over the years, Vone spent a lot of time trying to fix the place up. He always seemed to be in a struggle with the neighborhood. The other Hmong bar down the street, Moonlight Magic on Western and Thomas,  was a lot more of a dive. A few years prior, it had had a gunshot incident and been closed down by the city. That was the neighborhood. Lots of places had that problem, bars on Rice Street, anywhere with lots of young people.

When my roommate moved away, I started going there a bit less often. Each time I'd return, Vone seemed to have done some remodeling. He painted the walls. He installed booths all around the old pool-hall room. The last time I was at Malina's was about a year ago. There was a live band, a buffet, and everybody was dancing. I'd brought a date, and we joined them.


On the recent Frogtown dive bar tour last summer, I brought the group back into Malina's. This was years after Vone's tragic death at the hands of a disgruntled customer, but the place seemed like it was back up and running. The owner was welcoming and gracious to our tour, and everyone seemed to enjoy the eclectic space that is Malina's.

It sounds like the bar owners are trying to sell the place and keep it open, and that CM Thao is supportive of helping with the process. I hope that the owner can transfer the bar and liquor license to someone who can keep it running, and I hope the city can help make that happen. The city would be much better off with a welcoming and thriving bar instead of another vacant building on Dale Street.

[Follows are some pics of Malina's from the 2017 Frogrtown Dive Bar tour.]