Architecture and urban design are often simultaneously fundamental and invisible, shaping our freedoms, granting the ability to act in certain ways while foreclosing many other possibilities.

"You can walk on this sidewalk but not through this wall," they say.

"Here there are stairs but no ramp," our space tells us, "and this place is only accessible to certain people."

"This street is only for speeding cars," the ubiquitous refrain, "so tread at your own risk."

In this manner, our spaces speak in a thousand interrupting voices, shaping our freedoms and guiding our collective potential. This happens constantly, and we typically take these spatial limits for granted, our built environment blending into the backgrounds of our lives.

At least, that's true if you're white and/or well-off. If you're homeless, I imagine that the limitations of design are a constant presence in your life.

"This ledge is not for sitting," say the spikes.

"Do not be here," says the sign, literally, as do the eyes of the office workers and the posture of the police.

Join me on Sunday April 22nd for a walking tour of the "hostile architecture" of downtown Saint Paul.

The tour will be co-hosted with the Twin Cities DSA, and co-led by fellow streets.mn board member Dana DeMaster. We are going to walk around some of the often-subtle spaces for homeless people around downtown Saint Paul and hopefully lead a discussion of what's happening from an urban design and architecture perspective. I am hoping to share some thoughts on the limitations and possibilities of urban design, and how they might be viewed from the positions of the most vulnerable.

The tour will include some basic facts about homelessness and social services in Ramsey County, some history of downtown Saint Paul and how its urban and public spaces have shifted over the last few decades, some examination of physical and often marginal spaces that are sometimes provide refuge for people without shelter, and hopefully a great many other topics that come up during the walk.

What: A guided 3.5 mile walking tour of downtown Saint Paul, focusing on the spaces used by vulnerable people
When: Sunday April 22nd from 1 - 3pm
Why: Many reasons
Where: Meet at the corner of Old Sixth and Dorothy Day Place (old Main Street) in downtown Saint Paul
Who: Anyone interested and ambulatory. Tour is free! 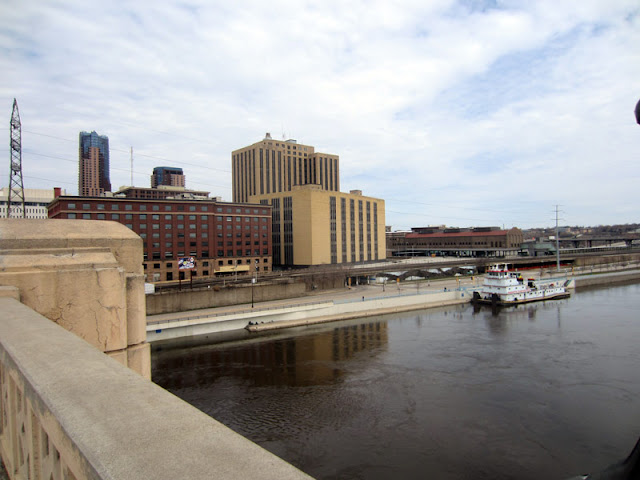 [The Saint Paul riverfront. Note the people sitting on the river landing, one of many spaces used by poor people.]

This sounds very interesting. Thanks for thinking to do this, Bill and Dana.