Notes from the Old Nicollet Walk

I was first struck by this part of the city when I first came across it many years ago, around the year 2000. I remember walking into the "Market BBQ", a self-proclaimed legendary Minneapolis restaurant for 40 years...

Well, if it was so famous, how come I'd never heard of it?

Since then I've always been curious about this part of the city that seems so off-the-radar of the mainstream, so full of old remnants of the built environment, despite being a stone's throw from downtown.

With that idea in mind, I put together a tour. The Old Nicollet Walk (defined as between Grant Street and Franklin Avenue) this sprinter was a fun time for me, and more than most of the tours I put together, an exploration. I didn't quite know the story of this part of the street, and I hoped that in doing research for the walk and bringing a group of people together, I might learn about this part of the city that had always intrigued me.

Here are some themes that emerged. Thanks to everyone who came out and joined me on this exploration of a fast-vanishing and often misunderstood Minneapolis neighborhood.

One theme that came out of the walk was how "tourist downtown" was actively hostile to this part of the city, in both subtle passive design and active ways.

During the tour, introducing "Old Nicollet," I shared my theory why so many of the restaurants here seemed to me to be lost in time and off the radar. Eat Street, the north Loop, hell lots of other parts of south Minneapolis all seemed like places that I heard about regularly in conversation, that made lists of "places to go," but this stretch of Nicollet was never mentioned by anyone I knew. It was almost like a blind spot, Minneapolis downtown lacunae, the very essence of a marginal space crammed between the freeway and the edge of downtown.

My theory had been that it catered primarily to downtown tourists, and that's why I didn't know much about it. Thus the weird old restaurants like Pings, the (now shuttered) Japanese-Canadian place, Market BBQ, (shuttered) Jerusalem, etc.

But then one of the participants described a story they’d heard about downtown. At the big tourist hotels, the concierge explicitly tell visitors not to walk south on Nicollet Avenue, to go instead north along the “mall” area. As a result, this strange segment of Old Nicollet received relatively few downtown visitors, Jay Leno excepted.

Similarly, the massive multi-super-block Convention Center offers huge featureless blank walls along its south and western sides. All the doorways, public spaces, and activity are focused on the north, and instead of serving as an amenity for the Old Nicollet area, it detracts from the public spaces and social life of the neighborhood.


The "edge of downtown" is a strange concept, because if you go back and look at the photos and maps of the mid-century Minneapolis, there were no "edges" to downtown. Instead of hard lines, downtown slowly dissolved, transforming into a residential area as you got a few miles out. Back then, the city decreased in density gradually like a classic gradient -- often called the "urban transect." A hundred years ago, if you walked from the center of downtown into one of the residential neighborhoods around it you would find a gradual decrease in density and intensity.

Today, most of the middle ground along that spectrum has been demolished and replaced with vacant, freeway, or low-density spaces. (Stephens Square and Elliot Park are notable exceptions.) The vacant lots, apartment buildings, freeways, huge walls, and parking lots form a strange landscape within which oddities like the old Music Box Theater (formerly Loring Theater, currently a weird church from Eden Prairie) and 80s-era faded restaurants like Ping’s still cling on within the Minneapolis landscape. 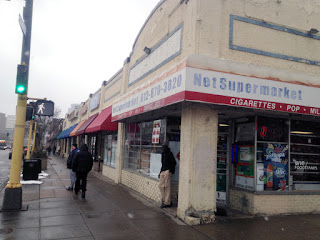 Most notably for this part of town, so close to Loring Park, Minneapolis’ crucial GBLT community has been centered here for generations. The 19 Bar, Minneapolis’ finest dingy gay bar, is a block away.

And two women who came on the tour shared a story of how they’d moved to the area in the 1970s and discovered a DIY lesbian-centered “coffee house” that began in a space in the Plymouth Congregational Church. It was a heart of the Minneapolis lesbian scene for many years, and one woman described an ongoing play about a fictional town called Toklas, Minnesota that had been performed in the coffee house for years.

[The Very Best of Fancy Ray.]

I personally recall how the massive Nicollet Village Video store served as a place for punk and queer kids to hang out all day and night, while also offering one of the two or three best selections of obscure videos anywhere in town. Similarly, the old Flame Bar and Grill, a strange country-western / R&B hybrid joint, once offered refuge for kids from all over the region.

Here’s a story about a girl from the North End who became a Flame fixture for years:


“Mr. Torp of Torp’s Music Store (also on Rice Street in St Paul) was a friend of my parents; he said country singer Ardis Wells was looking for a lead musician who could sing. I wasn’t 21, so we went over and met with her and Mr. Perkins who owned The Flame and they said ‘We don’t care if she’s not 21 as long as she doesn’t drink, we’ll take care of her, don’t worry about it’.””

Ardis was a female wrestler who rode elephants in the circus. “The floor would rise up with the push of a button and become a stage. Ardis Wells and The Rhythm Ranch Girls worked the front lounge of The Flame, our stage was up high above the bottles (see photos). Ardis would perform a trapeze act in The Flame while we sang, but the City Of Minneapolis shut that down because it was too dangerous. The Flame was the home of the $3.25 16-ounce steak. I still have their menus!”“


Similarly, the one or two old blocks of the southern stretch of Old Nicollet has some of the most diverse and eclectic restaurants anywhere int he city, including East African, West African, and Tibetan restaurants, all of them solid. (There used to be Vietnamese and African-American food here too.)

Over the years, this part o the city has been under severe pressure from city planners, civic boosters, and entropy. The freeway, Convention Center, road re-design, big government housing projects, and parking lots have taken their toll. But in the midst of it, a stretch of the old urban fabric has remained in tact.

But it doesn’t seem like it will last long. After a half-century of benign neglect, the real estate market on the fringe of downtown has begun to overpower the past, and when the 1940s-era Market BBQ building comes down, the remaining continuity of the old city is going to erode beyond recognition. There will still be an old building or two, but I fear the idea of the old street, visible in the historic photos, will be impossible to conjure.

So tour it while you can!