Setting aside the justifiable hand-wringing over proper flag design principles (aka. vexilology), I believe the Saint Paul flag is above average. What's more, the Saint Paul flag has a lovely historical pedigree filled with intrigue, mystery*, and changing sensibilities.

tl;dr: I just got some new flags in stock. They're on sale at a new low low price!

For more details about the flag's mysterious history, continue reading... 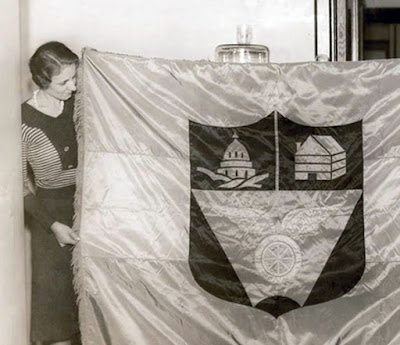 So the Saint Paul flag, the best official city flag in Minnesota, is good enough to be a useful compelling civic symbol for a great little city that could surely use one, particularly in this day and age when governments at nearly all levels face a crisis of urbanism. That’s why I remain an enthusiastic champion of the three-colored cloth, and when I look out my kitchen window and see my very own sun-dapped Saint Paul flag flapping in the wind, I’m happy with my city and proud of my Saint Paul flag.

And yet, the Saint Paul flag remains chock full of mystery. For example, who was Gladys Milttle and what became of her? Why are there so many versions of the flag? What happened to the original one? Why is there a stripe-less version on a pole in city hall? Who added the text and when? What font should it be?

But no mystery lurks greater within the pantheon of Saint Paul flag mysteries than the great conundrum that is #flagcolorgate.

I’ll let the tweets speak for themselves. 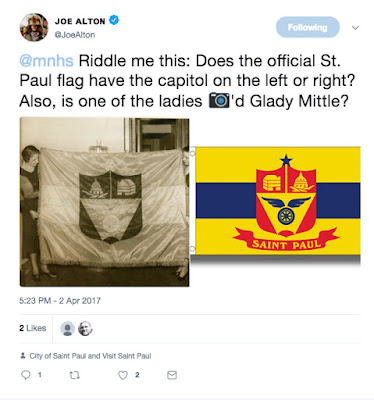 Joe Alton, Saint Paul flag skeptic and pillar of the community, gave the first pull on the dangling thread that became #flagcolorgate. And little by little, the sense of ease and certainty that had surrounded the Saint Paul flag for so many months began to unravel.

Witness some of unanswered questions 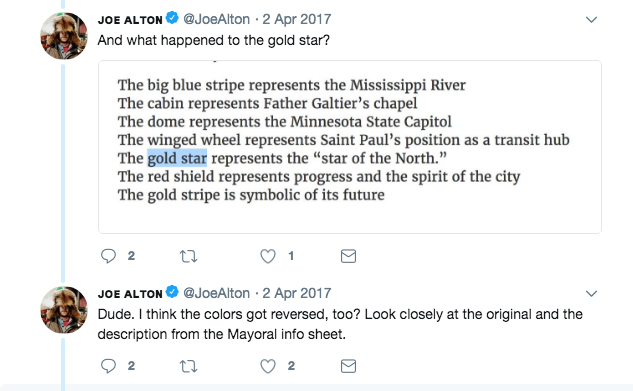 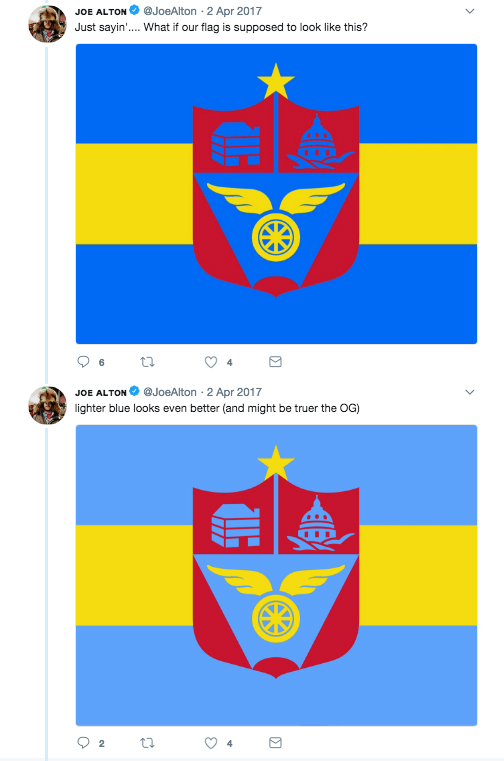 The mystery was dark and it sucked in people from all over Saint Paul. Nobody was spared, not even executive directors of regional energy nonprofits. The mystery of #flagcolorgate knew no bottom. 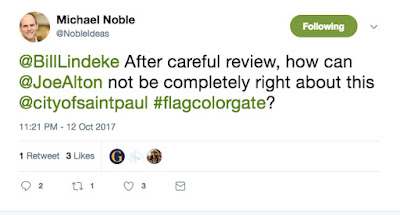 So what was to be done? The only clue was one grainy photo of Gladys Mittle and an unknown accomplice (Who was the second woman?) holding the original flag.

The photo quality is poor, and much like the “white and gold vs. blue and black dress” internet meme of 2015, the more you stared at the photograph of the original flag, the harder it seemed to discern its true colors.


Where could any Saint Paulite go from here?

I'd quickly reached my sleuthing limits. The Minnesota Historical Society did not seem to be much help and, like the sealed-up caves underneath the abandoned Highland Park Ford factory, I felt empty inside. 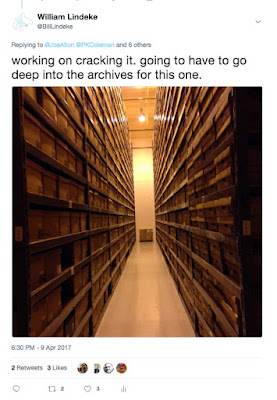 It was into that breach that our first hero emerged.


The first break in the case

On his own accord, and following the train of #flagcolorgate, Spence delved into the various historical achieves that Saint Paul has to offer. First he went to the Historical Society, perched on its marble’d hill between the twin domes of the Cathedral and the Capitol, and unearthed flags from the archives.

Then Spence went likewise to the Ramsey County Historical Society and found more information on the flag and its murky origins.

Here’s what was uncovered:

Key points: the oldest remaining version flag dates to the late 1940s, over ten years after the original. Furthermore, the last remnant copy is made of wool bunting, NOT SILK, meaning that it is not the original Mittle flag.

But even that flag has been lost!


Lost in the chamber of secrets

In search of the missing flag, which might have the answers to some of these mysteries, I reached out to a friend at the Chamber of Commerce. After all, they original sponsored the flag contest back in the 1930s (when they were known as the  Retail Association). If anyone had the old flag, surely it was they!

Alas, the "Chamber of secrets" had moved locations a few years ago, and carefully gone through all of their archival material. There was not giant warehouse like in the end of the Raiders of the Lost Ark. There was no flag to be found amongst the boxes of pamphlets.

The mystery seemed to reach an impasse.

Once more, #flagcolorgate was proving unsolvable. Images of Gladys Mittle haunted my restless sleep. The dreadful gold stripe-on-blue backing photonegative flag fluttered in my dreams. Nothing I’d seen could debunk the notion of #flagcolorate, and it seemed like the good citizens of Saint Paul would never know the raw truth, hidden so deeply underneath the decades of dust and forgotten hopes. I had dived into the #flagcolorgate mystery, and there was no bottom.

But like any good investigator, I rose again to think over the facts before me. I took out my notes and re-tooled my mind.


One key question kept nagging at me. Where had the description of the “gold star” come from?

It was right there from the beginning, on the flyer in the mayor’s office where I’d first discovered the basic facts about the Saint Paul flag, oh so many years ago.

I dug out my old photograph and looked again. and then it hit me. Right in front of my nose, there was a name. 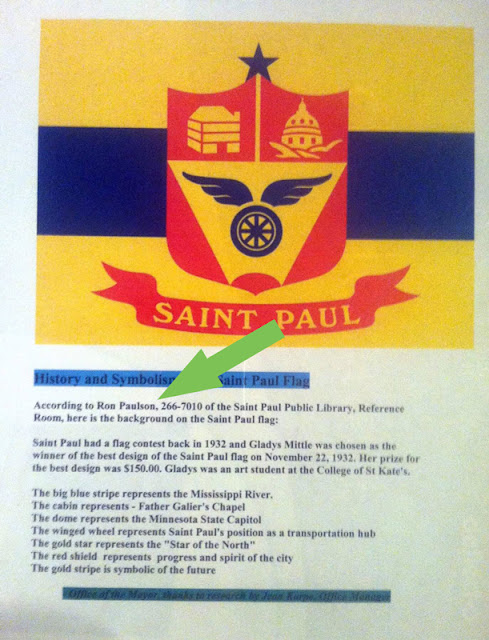 Of course! The central library!

Gingerly, I picked up the phone and dialed the number. I asked for Ron Paulson. I had no idea if he was dead or alive, or if he had ever existed. I was betting that nobody at the library would even know is name.

“Ron Paulson? Sure. He’s away today, but he’ll be back at the desk tomorrow,” said the cheerful librarian. “Just call again in the afternoon.”

What luck! The man who might have all the answers existed after all!

The next day couldn’t come fast enough, and I spent the afternoon at the Rice / Arlington Batting Cage trying to smash my softball-sized #flagcolorgate anxieties into the netting of the cages.

Finally, the dreaded day arrived and I again rang the Latimer Library. Ronald Paulson picked up. He was helpful, cheerful, and right away started filling in the historical blanks. I asked him all kinds of questions, and then he offered me the gold mine. Within an hour of the call, Paulson forwarded me a pair of .tiff files full of a repository of Saint Paul flag knowledge.

First, the 1931 articles about the initial flag contest. These don't have any details about the gold or red star, but do firmly document the flag's historical provenance: 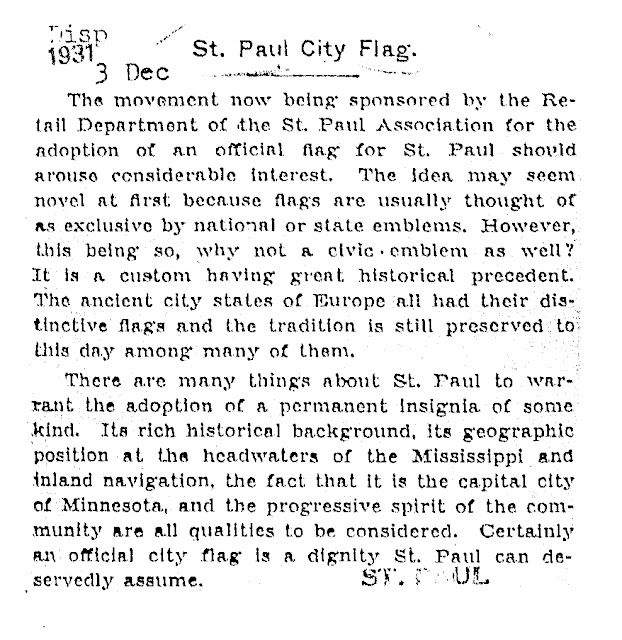 Second, here are the articles about Mittle's flag. While these do not firmly clear up the gold star / grassy knoll, they do clarify the mystery of the colors: 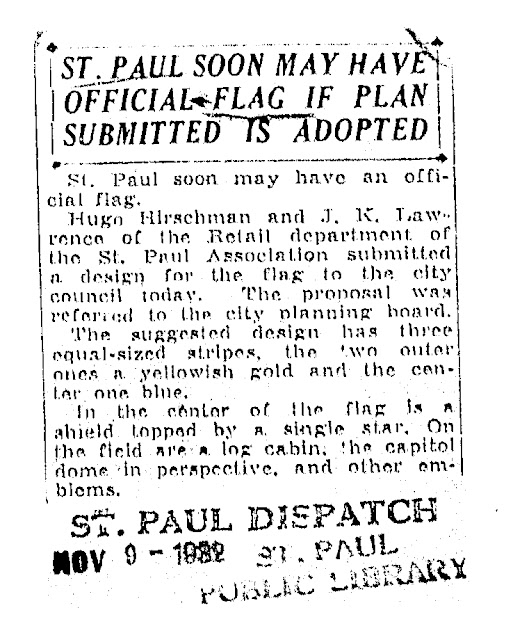 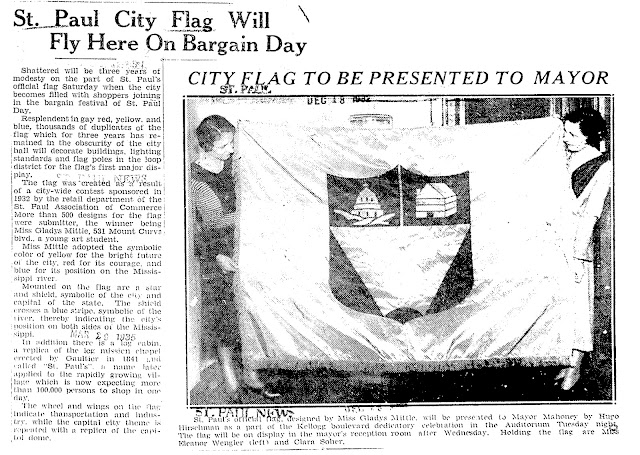 And there are some more mentions of the flag in the subsequent years: 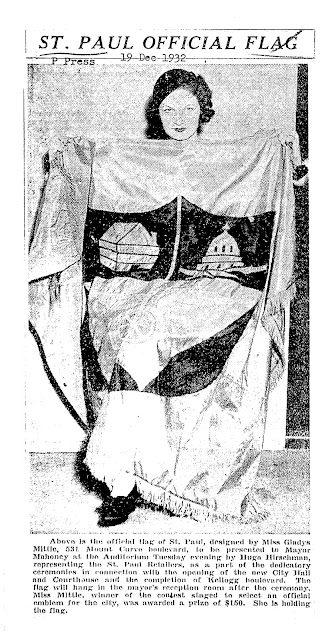 Well, I dare say that the mystery of #flagcolorgate is not yet closed. There are things we've learned about the flag, answers that have only raised more questions.

At last, we know more about Gladys Mittle, for example, how she was so greatly influenced by Sister Theresa, or that she enjoyed posing with the flag.

One thing is clear today that wasn't clear a month ago. It seems that blue-on-yellow was always the original flag's color. It's stated clearly in the 1932 article that there were "three equal sized stripes, the two outer ones a yellowish gold and the center one blue."

And yet the other details remain murky. The star continues to elude me, as do the ever-changing fonts -- a cardinal sin of flag design, no less! -- that appeared insecurely on the flag and have not yet gone away.

Just like the grassy knoll, I fear we may never know the true color of Mittle's star. Was it "gold on yellow"?

It does not appear to be red, that's for sure, as the photograph at right clearly shows... It might be blue, but what shade of blue?


Then, as now, Gladys Mittle remains cloaked in mystery.

In short, no matter what color the star originally was, today it's a lovely blueish hue that contrasts perfectly with the yellow background.

So get your Saint Paul flag today! Share your love of Saint Paul and your respect for #flagcolorgate and all its profound mystery.
Posted by Bill Lindeke at 10:15 AM

Clarification on the 1965 StP Dispatch article photo... The image does not show the ORIGINAL flag, it shows the "NEW" flag. Basically what happened is the original flag design was so crap that the CofA and Jaycees thought it would be a great idea to "improve" it by adding the "Saint Paul" banner to it. The city council voted to approve the change, and here we are with this photo of the CofA presenting our worse flag to the city. Maybe someday we'll have a flag that people will actually want to fly.