Four years ago, after the Minneapolis City Election dust had settled, I did a quick analysis of the results and pointed out how there had been a big generational shift at City Hall. With a big influx of under-40 Council Members taking over for older folks, the "average age" of the fourteen elected officials went down that year from 54 to 42, a drop of twelve years. That's about as big a "generational shift" as you can get, especially if you are keeping half the incumbents around.

Here's what I wrote at the time:


Age isn't everything, of course, any many of the incumbents are "young at heart." But sometimes age is important. As everyone who has ever had parents knows, there are big generational differences about the importance of computers, cars, "quality of life", etc. It'll be interesting to see how and if Minneapolis starts to "act younger" with its decision-making as the new council takes the reins.


Well, despite everyone being four years older than they were four years ago, this year's results only continued that trend. Two new council members are under 30, the new mayor is under 40, and here's the updated chart:

(Note: I do not have Jeremy Schoeder's age in here yet. I have reached out to him and will add it when I can.)

For the record, the median age in Minneapolis is 33.7.

That's only part of the picture. The other, much bigger deal, is that the City Council has become more diverse. On one hand, the city's gender parity is gone, and that's disappointing.

On the other hand, there is a big increase in people of color and non-cisgender representation. That is huge. 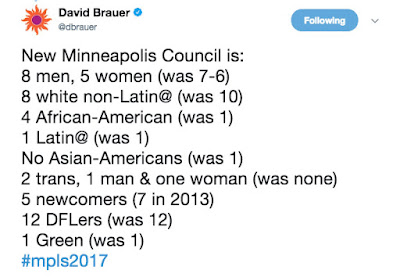 Especially when compared to eight years ago, there's been a visible change in the political and power dynamics in Minneapolis City Hall. In an era when cities are under attack on all sides from other levels of government, engaging younger people and historically disenfranchised groups in local politics is a great sign.
Posted by Bill Lindeke at 12:09 PM