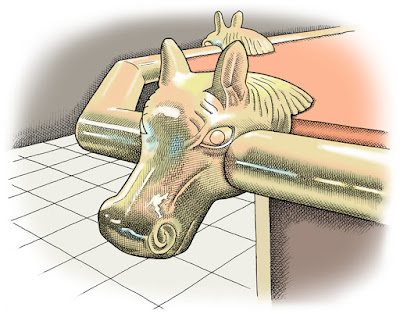 Tracks Bar on University Avenue has long been one of the weirder ones. Probably most people think that it’s called “Tracks” because it's near the railroad tracks. This is absolutely not the case! The true story is weirder, and you can read it below.

I liked Tracks, and would often meet people there to give them the flavor of the Midway neighborhood. Tracks was the bar and restaurant of the Midway Days Inn, and hanging out at Tracks was always food for thought. During the day, the place would be a mix of old alkies and bored budget travelers, the perfect place to wallow in vague depression. It was connected to the hotel hallway, and to get the the bathroom you had to go past both the bar fish tank and the hotel swimming pool, each of which had its own distinct aroma.

I remember drinking beer with a friend and watching a messed-up man fall asleep on the bus stop out the window. He leaned way over, drooling on himself before gradually succumb to gravity and slipping into the sidewalk. After a half-hour or so, a cop came and told him to move along.

Over the years, Tracks has tried to change, adopting a classic University Avenue Asian-American menu, for example, or rearranging their darts machine. Off in the corner sat the last remnants of the old “supper club”, a previous incarnation (described below). It was a great place for pull tabs, darts, odd encounters, frozen pizza, and long beer-fueled silences. It was also a comfy well-fenestrated hangout for people in Saint Paul uninterested in $10+ burgers (as punk poet and Tracks fan Paul D. would tell you).

Tracks was a stop on my 2015 Midway Dive Bar tour, and Dickinson was there to greet us. I think he was grading creative writing assignments, and looking out the window. Midway is a part of town that is rapidly changing, but I thought that Tracks would stand the test of time.

I guess I was wrong.

Get there while you can, because tomorrow is the last day. So long, Tracks. 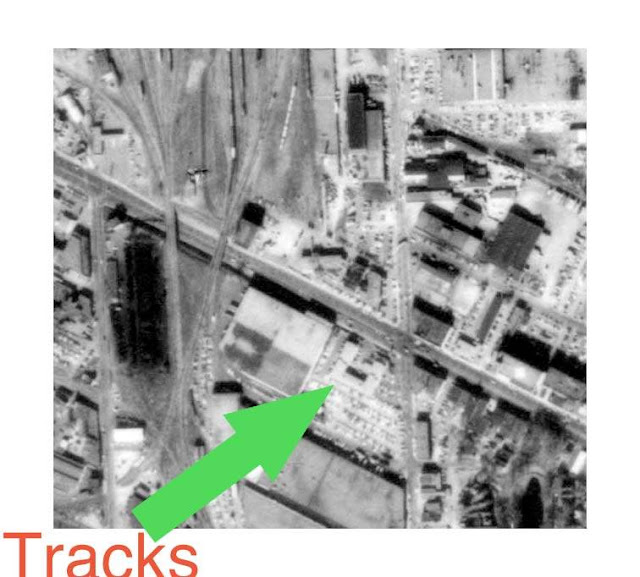 [My excerpt on Tracks from my Dive Bars of the Midway guide booklet follows. Buy the entire guide online!] 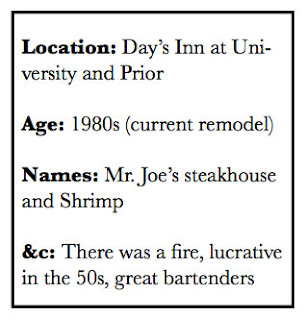 Dives come in all shapes, sizes, and temporalities. Tracks, about a half-mile West of Snelling Avenue,
offers a most curious story.

Far back in time this was a “surf-and-turf” white tablecloth joint named Mr. Joe’s. “It was hopping,” one old patron once reminisced, which is difficult to imagine today because, somehow, Tracks transformed from a swank steakhouse into a drab motel bar the color of an expired nectarine.

Today, Tracks is the bar connected to the Midway Day’s Inn, one of the only hotels around, and here small worlds collide. Midway regulars, railroad drunks, cheapskate travelers, and innocent tourists mix to an unmatched social flavor. Where else can you spend an hour playing pull tabs with tourists in town from Iowa for the Hawkeye game while watching people cross University Avenue.

Adding to the human cocktail is the hotel pool, whose chlorine scent sometimes wafts through the door past the fishtank, occupied by two or three goldfish and an inky bottom feeder, and whose sounds echo through the hallway on your way to the bathroom. I’ve a recurring fantasy of renting a room at the Tracks Day’s Inn over a birthday weekend (or out of impromptu despair) and maintaining an assembly/conga line between the bar, the hotel room, and the hot tub waiting between them. Tracks combines the curt familiarity of the dive bar with the uneasy liberation of the hotel bar, a magical and overlooked fiasco, especially in the middle of the city.

The hotel dive: likely a creature of circumstance, most often found in the suburbs. But here it encroaches into the Midway.

Should you achieve intimacy with Tracks, you’ll notice the strange gold protuberances punctuating the rail along the bar in the shape of huge horse heads. Funny story. Back in the 80s, when Tracks was weathering its nadir, there was a fire, and the club went through a deep identity crisis. Meanwhile a fantastical development was taking place at the very edges of the Southwest suburbs: speculators were building a racetrack named Canterbury Downs. It was to be the first ever Twin Cities’ horse track, and the imaginations of the risk-prone filled with visions of easy money. It was around this time that Tracks was re-named and re-modeled to capitalize on the soon- to-be-burgeoning culture of pony players. Tracks was to be the city’s first off-track betting (OTB) establishment, conveniently located in the Midway, right between the two downtowns. Everything was going to come together, like a great 80s metal cover.

A common pastime at Tracks is to sit at one of the window-side tables and watch the bus stop on the corner. For some reason, this particular shelter attracts vagrancy, and I’ve wasted many a pleasant hour ignoring my problems with beer, watching a man with more problems struggle to stay upright, people drag large bags across the street, or the transit police appear to deal with the addled over-exuberance emerging from the #16 bus.

It would be remiss to point out that this building is hideously ugly, a monochromatic pale orange with vague late-80s cartoon modernist flair. Tracks and the attached motel form a “U” of bad architecture that belies the fact that, inside, you’ll find some of the city’s finest bartenders, sarcastic and firm.

Appearances can be deceiving. Highly recommended.


[Get your own copy of Noteworthy Dive Bars of the Midway or any other of my dive booklets today!] 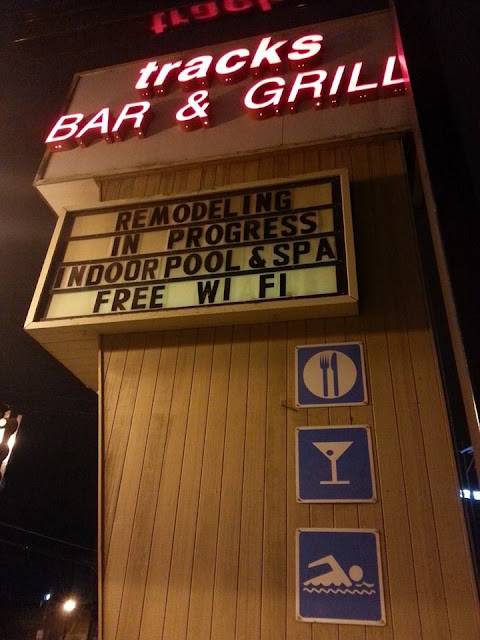 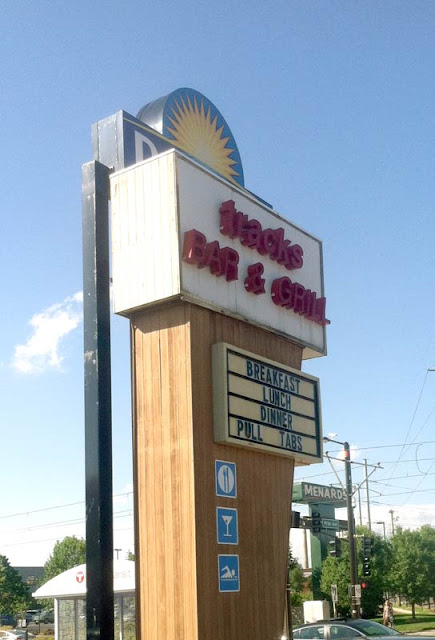 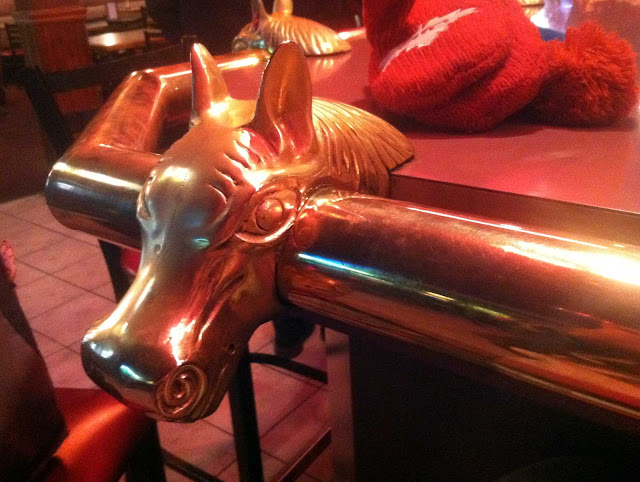 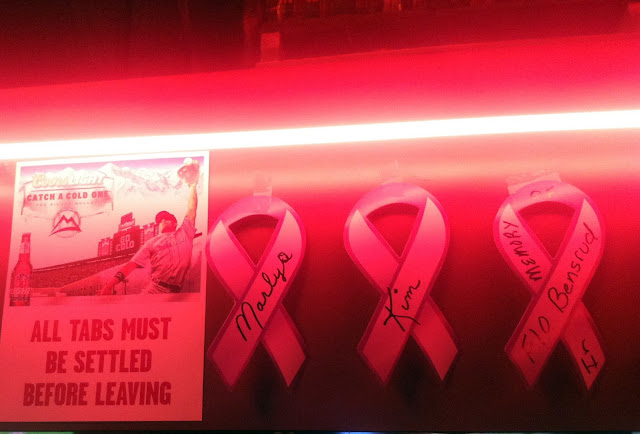 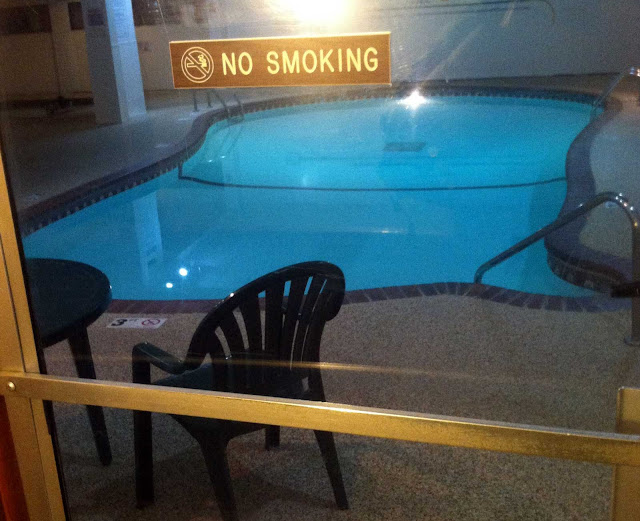 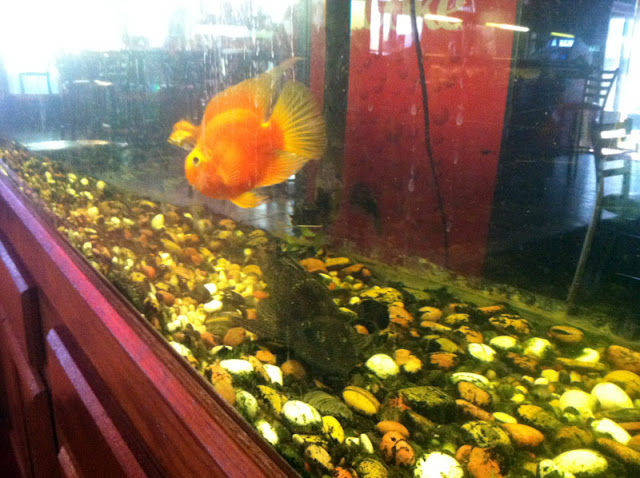