Despite the shiny press release on the University homepage, the first day of school didn’t go so well for bicycling on the University of Minnesota. A student riding through one of the many highly-trafficked intersections on the edge of campus was crushed underneath a suburban commuter bus on the corner of 10th Avenue and 4th Street. As of last week, she was in the hospital.

The details of the accident aren’t clear at this point. It appears that she was trying to turn left from the poorly-designed bike lane on 4th Street where it meets the 10th Avenue bridge. Somehow, she got pinned under a suburban commuter bus that was also turning left.

While the details are murky, this accident sounds almost exactly like one that occurred in 2008 that occurred on the exact same corner:


A Metro Transit bus ran over the legs of a student on a bike on Thursday at 11:10 a.m. on the corner of 10th Avenue Southeast and Fourth Street Southeast in Dinkytown, the Minnesota Daily reported.

Metro Transit Police spokesman Bob Gibbons said Arnett was going in the same directionas the bus. Gibbons said both were stopped at the stoplight, and Arnett rode out ahead of the bus when the light turned green. They collided when the bus tried to pass her, causing Arnett to fall and be run over by the rear wheels of the bus. The case is still being investigated, Gibbons said.


The article continues with a terribly grisly description of bones being crushed by a bus. I wouldn’t recommend reading it.

Not only is Dinkytown the area with the largest numbers of cyclists in the city, it’s also arguably the most dangerous. The site of this accident – along the 4th and University bike lanes – is a few blocks away from the spot where Kimberly Hull got killed by a truck last year while trying to bike to school. At the time, I pointed out that it didn’t take a Nostradamus to see that this dangerous intersection would be the next site of an accident at the University:

Whose bright idea was it to create 3-lane one-way streets where cars are encouraged to drive 40+ miles per hour right through Dinkytown, just feet from fraternity row, right in the middle of the most highly-trafficked pedestrian environment in the whole city where you have thousands of college kids wandering around wearing iPods and flirting and playing frisbee and drinking beer and generally having a nice time going to college? Why would you put these high-speed streets right in the very spot where hundreds of cyclists are riding at all times of the day and night? Why do the bike lanes along University and 4th start and stop without warning?

This “accident” was highly predictable, and will inevitably happen again until we do more to protect students and to discourage cars and trucks from driving through campus at high speeds. Hopefully this accident doesn't end up discouraging students from riding their bikes. The University needs to do more to make sure that we can all get around the school on a bicycle without being run over and killed by trucks.


I even included a picture of a spot a block from the scene of the crime, along with the following caption. 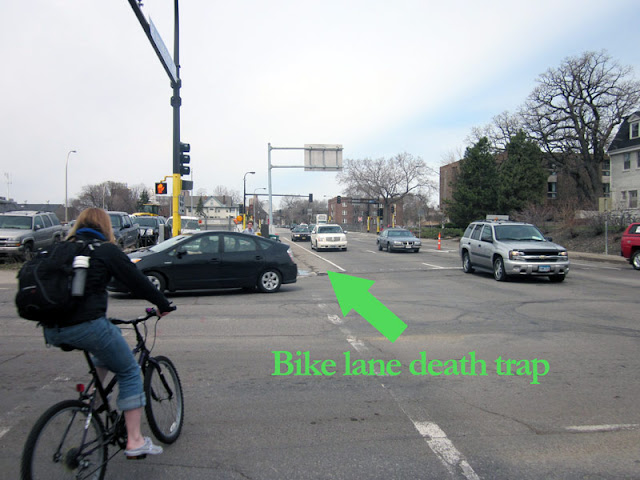 [In a very close decision, this junction of University and 35W gets my vote for "University Bike Lane Most Likely to Cause Another Cycling Death in the Future."]

This is one of the few times where I hate to be right. At this point, people in the University community can stop calling these events “accidents,” and start calling them mortal design flaws. The Univeristy and 4th bike lanes do little to protect cyclists. Every day, they put students in harms way. When you combine these unprotected, narrow, disappearing lanes with a chaotic traffic pattern and thousands of young bicycle riders, it’s a recipe for disaster.

[Someone shot a video of what its like to bike along 4th Street through the Interstate 35W interchange where the bike lane magically disappears.]

The areas around campus are the densest places for bicycling in Minneapolis. Our urban University campus is one of the main reasons why the city’s per capita cycling statistics are high relative to other cities the country. But, as I’ve also said before (in my approximately biannual rants), their bike lanes stink.

There are lots of reasons why the University doesn’t do a good job for cyclists. For example, there’s a long history of tension, rioting, and protest between college students and university administration. To that end, there’s a tendency to create “defensible” spaces around campus, and this means allocating students less public space. The University has long been committed to building and maintaining parking lots, and their consequent access for automobiles. University procedures prioritize departmental autonomy in building design, so that there is little attention paid to transportation concerns or a larger coherent design strategy. (The great example of this is the new science and technology building along there river, which effectively cuts off the Washington Avenue bike lane.) Plus, University higher-ups uniformly drive, and don’t enjoy sharing their sidewalks with bicycles. There was a tragic accident back in the 70s where a cyclist hit and killed a pedestrian. If you talk to anyone in the school, these reasons will start popping up like GMO crops in Hungary, and you’ll have little luck arguing for the needs of student bicyclists.

Sure, there are a few good changes happening for bicycles at the University. I’ll the first one to give the school accolades when it deserves it. The new transitway extension (whenever it gets completed) will be a huge improvement for anyone entering campus from the East or West. The post-mortem green paint treatments near Dinkytown and Pleasant Streets is a nice step forward. (It’s the best application of green bike lane paint anywhere in the State, and makes downtown Minneapolis’ green bike lanes look awful by comparison.) The new bike center, despite the out of the way location in the basement of a parking ramp, is slightly better than nothing.

But continuing to ignore the dangerous bike paths around the school means its inevitable that more Minnesota students will be hurt or killed. The school issued a press release on their website homepage the same day that the accident took place that touts the school’s new “ZAP program.” This program, which is primarily aimed at faculty and staff, incentivizes people to bike around school to get health insurance benefits. Sure, it’s a good program, but it's beside the point.

The best solution would be to institute a similar buffered bike lane treatment that the city just approved for Park and Portland Avenues. I wrote last year this was the obvious solution for making these streets safe for everyone:


If the University really cared about encouraging cycling and keeping cyclists safe, it seems to me that the University and 4th corridors would be the perfect spots for a buffered cycle track, like they have over at the University of Wisconsin in Madison. Cycle tracks are the 'gold standard' of bike infrastructure: bike lanes buffered with concrete barriers and traffic lights timed to bicycle speeds that would calm traffic along this busy and pedestrian-heavy stretch of the city. That would do worlds of good for cyclists and pedestrians on campus, and it's just one obvious idea.


The University should immediately prioritize a new design for University Avenue along campus. they should moving the bike lane to the right side of the road, and build a buffered cycle track (like the one in at University of Wisconsin-Madison) that would be safe for students of all abilities. The sooner the Univeristy and the city team up to accomplish this change, the better. Until then, it’s just a matter of time before there’s another accident in the Dinkytown bike lanes. [This is how they design bike lanes at better Big 10 schools.]
Posted by Bill Lindeke at 9:48 AM

This makes sense but I'm curious who actually owns and does upkeep on the roads presented. I've been of the understanding as a student at the U and now an alumni that frequents campus, that the streets labeled with maroon signs are the U's and under their jurisdiction, while the streets with green or blue signs belong to the city/county jurisdiction. If that is the case, the city is to blame for poor design (and really, this isn't the only place), not the U. While the U can and should advocate for better bicycling lane design on the streets AROUND campus, as the ones presented are, it ultimately does not have a lot of say in how the city ultimately implements a design plan, or lack of one. Now, I know playing the blame game doesn't help, but the city of Minneapolis should be involved in this more if indeed we are talking about their streets. Both entities should be willing to work together.

If you think the "gutter" lanes on the 6-lane University Avenue/4th Street expressway are dumb and dangerous - which they obviously are - you should see the even dumber and more dangerous "bike" lanes on the rebuilt Washington Avenue "transit mall." When Washington Avenue opens to the buses that are now using University Ave./4th Street, many more bicycle-bus collisions will be waiting to happen.

I have got the superb information from these blogs finally.life insurance