I was at a public meeting a little while back, a presentation on Saint Paul streetcars. The presenter was showing slides of the potential streetcar routes, along with a set of interesting maps of Saint Paul's poverty rates, development potential, and demographic data. One of the slides was interesting, showing the number of people in different Saint Paul neighborhoods who don't own cars.

The presentation ended, and we got to the question period, and one of the audience seemed a bit skeptical about the need for streetcars. During his statement, he asked a rhetorical question that stuck with me: 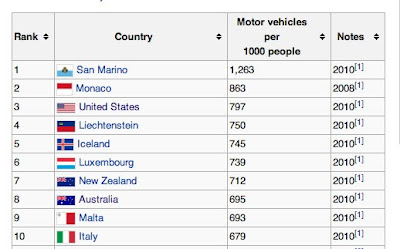 I suppose this is a fair point. Recent trends aside, it seems like everyone in the US that can own a car, does own a car. And numbers back this up: we have .8 cars per person in this country. Unless you're in San Marino or Monaco, its impossible to live in a place with more cars per person than the USA. We've gone about as far down the primrose pavement as you can possibly go.

Still, it's easy to forget about people without cars. Given that many many people own more than one car, there's plenty of space for people who don't own any. And just who are these mysterious folk?

Let's meet some of them!

Poor People: This is the largest group of people who don't own cars. Simply put, cars are expensive. If you're struggling to put food on the table or a roof over your head, cars are farther down the priority list. This is a large group of people, and frankly, designing cities for cars means screwing poor people. So there's that.

Meanwhile, transit systems become synonymous with welfare instead of transportation.


Young People: As the question stated, young people don't own cars. In fact, its illegal to drive until you reach 16 years of age. Why? This is because young people are easily the most likely group to kill themselves or others with these heavy fast-moving machines.

What's it like to grow up without a car in most of the US? It means a huge lack of freedom, dependence on your parents for rides. Unless you live in an urban area (very rare!) you're basically stuck in your small cul-de-sac laden neighborhood watching TV and playing video games.

Old People: As the question stated, old people probably own cars but shouldn't. There are lots of older people, north of 80, who are driving around right now but probably shouldn't. I can think of a few relatives who drove until the end, people with horrible reflexes, who could barely turn their heads, people who could barely see any more. They still drove, though, because there was no other choice.

It'd be nice if we could give older people a way to get around that didn't present such obvious dangers to the public. Old folks home are going up in urban neighborhoods throughout Saint Paul, and that's a huge relief. Meanwhile, Florida still leads the nation in deadly road design, a fact not helped by their demographics.

Did you know? Some students are from other countries!


Strange Adults: There are weird people who don't own cars, like myself, for odd reasons that you won't understand. It's hard to explain this group. Artists, environmental hippies, committed weirdos, urban planners. There aren't many of these people, but somehow they're important.

To offer one example, look at David Byrne. David Byrne doesn't own a car (unless you count his vintage Peugeot.) He's amazing. Look at his outfit. Read his books. Listen to his vintage music. Check out his tree drawings. Play with his clunky organ.


In fact, there may be many people out there who currently own cars, but rather wouldn't. Maybe the question to ask is: "Who Between the Ages of 18 and 80 Doesn't Want to Own a Car?"
Posted by Bill Lindeke at 10:38 AM

I don't own a car, and I LOVE IT. Friends and family are constantly hounding me to get one, but why should I? I live a block off a bus line, work at the first stop Downtown, and when I need to run errands, my boyfriend and I go together. We get by just fine being a one car household.

Excellent! Keep up the good Non-work!