Sidewalk of the Week: West Side Flats 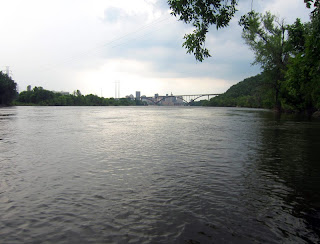 Water is always moving. In Minnesota, with our lake fetish, its easy to forget this. Rivers flow. Oceans current. Tides rise and fall with the clockwork moon, swallowing and re-swallowing great swamps of beachfront. Rivers too stage great feasts, rising up and expanding their sides like a snake digesting a piglet, the river edges always moving, always living with a murky threat.

Riverfronts and riversides and riverbanks, then, must be carefully fortified behind city walls for fear of liquidation. Land left unguarded remains, reserved for disaster and emptied of value. 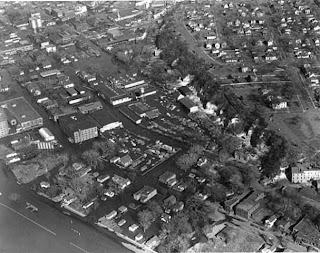 It wasn't always this way. The river's edge through Minneapolis and Saint Paul were lined once with lost civilizations, wagers against nature. Bohemian Flats, Lilydale, and many nameless other spots along the river housed homes built from spare lumber and anything else worth scrounging. And none of these riverside settlements had grown so dense as the West Side Flats, directly across from downtown Saint Paul, sitting atop its bluff like a castle. The area filled with factories along the streets by the bridges, warehouses along the streets behind. In between rose the unfancy homes of the city's newcomers, social climbers starting at the bottom. Sidewalks galore ran through the flats, and gangsters, factory men, families filled the streets. 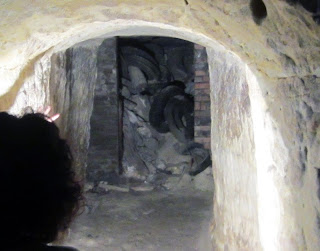 As in most cities, topography mirrored class. (James Hill was on top.) Only the poor lived on the flats, and there was a good reason for this.  The river would rise up when spring snows melted and flood the streets. I suppose people handled it as best they could, and things went swimmingly until the '52 flood, bigger than all the rest put together.

That spring, navigating the flats required a boat. Seemingly everything was lost. In the first act of wholesale slum bulldozing in the Twin Cities, the city simply scrapped the neighborhood. Wood, tires, buildings were tossed. Some of the old flats neighborhood still sits entombed in caves inside the bluff, sealed up like a pharaoh. 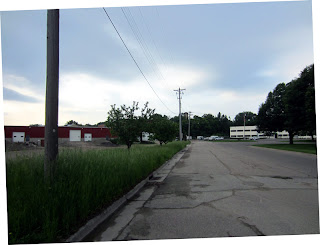 What came next was not pretty. Ironically, soon after clearing away the streets and homes, a levee was built to protect the land from future floods. Today the flats are an empty mix, its sidewalks still abandoned in the shadow of downtown. Most of the old streets circle one-story bunkers, parking lots surrounding some barely windowed bit of beige. Is it a Mexican restaurant or a hospital supply warehouse? Is it a clinic or home to MN-DOT's airport division? But for the signs, you cannot tell. Empty parking lots mass against the horizon, and once in a while odd groupings dot the landscape: an old remnant building, two dozen motorcycles, a metal yard, a cave with a locked door. Few buildings reach the sidewalk. The tallest among them a Red Cross center, and if the wind blows from the East the dry pungent smell of preserved blood washes through the air. 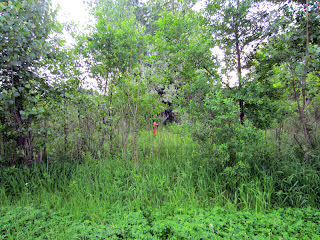 The very center of the flats is the strangest of all. Here the land still sits empty. It is just nothing, shrubs and trees, an occasional lamppost, a fire hydrant in the woods, a dumpster, a cell tower, an unclosed fence. Empty is not the correct word, of course, but vacant. Paths wend through the green lots, cutting between gaps in the hedges, leading to places with no names. Here is the city's blank shadow, the lacunae, a sixty-year forgetting, too close to city hall to see clearly. Always the river flows by the flats, now safe behind the barge wall. Each summer night the excited moan of the riverboat horn sounds here, bouncing along the tops of concrete strips, into vacant forest lined with paths through the gravel and grass. The sound suggests to me that someday the sidewalks of the flats will fill again with people, but tonight you can still feel the floodwater.