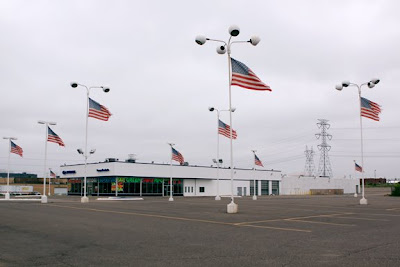 Lost in the automobile buzz over robo-cars is the debate over Tesla Motors' attempts to sell cars over the internet. To me, Tesla, which makes high-end electric sports cars, is a harbinger of the electric, elite future of driving. But Perhaps their most interesting angle is that Tesla has found a way to bypass the auto-dealer system, selling their cars directly to customers over the internet.

Here's a good description of the situation from North Carolina:


Dealers say laws passed over the decades to prevent car makers from selling directly to consumers are justified because without them auto makers could use their economic clout to sell vehicles for less than their independent franchisees. Dealers say Tesla's direct sales violate those laws. These franchise laws have insulated car dealers from much of the e-commerce revolution that has hammered other sectors from books to electronics.


Trying to bypass the car dealership system is maybe the most interesting thing that Tesla is doing! Ever since Denny Hecker was rode out of this town on a rail, all his old car dealerships left to rot in the harsh suburban sunshine, ever since University Avenue's row of mid-century car dealerships went belly up, to be replaced by actual people living and doing things, I've dreamt of cities unringed by huge car dealerships. Clinging to state regulations will only work for so long. Eventually, we'll start selling cars online, it will catch on because people love saving thousands of dollars, and all those large parking lots festooned with American flags occupied by begrimed salesmen addicted to truecoat will begin to fade away.

Picture a world without car dealerships, where people have cars shipped directly to their homes. I'd give car dealerships another 20 years, maybe, but in the 21st century city, huge acres of patriotic parking lots might be as popular as an orthodontist at a Jr. High dance.


What Else Is Becoming Obsolete?

It got me thinking about what else might be becoming obsolete. In a world of high energy prices, constant communications technology, and low wages, what else might go the way of the elevator operator and the TV repairman? Here's a short list, with the ETA on obsolescence:


Taxis: The 'smart taxi' trend is growing faster that I would have thought. Smart phones are threatening to replace taxis with part-time drivers and fairly sophisticated software that can rate different customers and drivers. I've always thought that taxis are too expensive. One or two cities will go 'all in' with the smart cab system, and they'll have very cheap rates. While they'll never likely disappear, the top-down taxi system as we know it is bound for the scrapyard.


Airports: Expensive oil means that flying will keep getting more expensive. It's already plateaued, forcing airlines to consolidate and brainstorm diabolical new ways to treat people like chattel. Cities continue to expand their airports, hoping to attract carriers increasingly likely to cut their losses and abandon great swaths of the country to fly-by-night operations. Because its so damn fast, air travel will always be around. But, particularly once the feds stop subsidizing small and mid-size airports, you'll happily take the bus for eight hours to save $1000 on a flight to the coast. All but the largest airports will become obsolete.


Convention centers: Convention business is already peaking. As cities all around the country use obscene amounts of money to try and lure the smaller pie convention, lots of places are going to lose out and get stuck with giant architecturally dubious albatrosses in their downtowns and along their lake fronts. Throw in expensive air travel, thin profit margins, and flat wages, and convention centers might soon be as popular as a mime at a blindness convention.


Football stadiums: One reason that football's concussion problem is interesting is that it nicely illustrates risk thresholds: the more elaborate the safety equipment, the more risky and extreme the play becomes. Thus, paradoxically, football was safer before they had real helmets.  Today, there have been many predictions of football's demise, as parents begin refusing to let their children play the sport due to inevitable brain damage. Maybe pro football won't disappear, but it might shrink to UFC-level relevance, making giant stadiums obsolete.


Beach Homes: You can all see this coming. Climate change + hurricanes = problems securing flood insurance. No more Jersey Shore. One or two more storms, and at some point, beach homes will be only for the extremely wealthy. It's only a matter of time.


Ski resorts: Ditto. Climate change sucks. Hard to see this economy continuing, except at the very high end (which it already pretty much is anyway).

what to say i praise of this blog, which contains a lot of amazing information as well as the thoughtful writes.
carefree estates