This is by no means an endorsement, but I wanted to share the lit that the Tim Holden for Mayor campaign was passing out. You can read it for yourself: 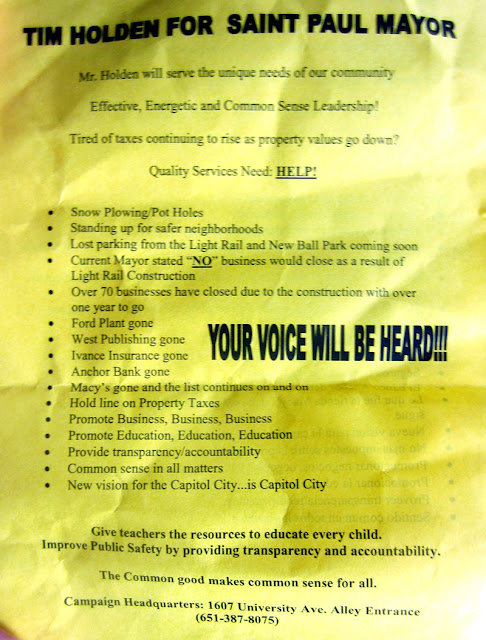 I like Mayor Coleman, but nobody should get to run uncontested for an office as important as this. I remember covering the great Rybak/McLaughlin Minneapolis mayoral debates for KFAI News back in 2005. It was pretty much farcical, two almost identical candidates saying almost identical things, desperately trying to differentiate themselves. It was also a non-event; Rybak had little chance of losing that election. But at the very least, it forced the mayor to stand on a stage before voters and state his position on issues. At the very least, it was an opportunity to talk about things like transit, taxes, and economic development.

It's disappointing that in Saint Paul, nobody legitimate is running against our incumbent mayor. Not because I don't like him or am not going to vote for him (I do, and I will), but a living breathing city should challenge itself on a regular basis. It's sad that the Holden campaign is the best that Saint Paul can do.

Regardless of the eloquence of Mr. Holden's opening salvo,and even- though I am a Coleman supporter, I totally agree that the Mayor, or any candidate for that matter, should not run unopposed. You are certainly entitled to your opinion
as to whether Tim Holden is qualified to be a candidate for Mayor. I say welcome to the campaign and good luck!

Coleman will very likely win, but his legacy and problems remain and the individual will be squeezed out. I will not miss Saint Paul.