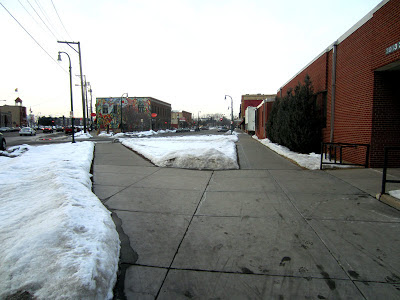 There are certain parts of the city that attract me. Certain buildings draw me closer, lure me in. Particular corners beckon and I cross the street to bring myself up to them, to brush my feet against their street faces, to peer and inspect. In particular, I am drawn to acute angles, parts of the city that defy the universal logic of right. Any intersection with more than four roads, any triangular block, any curved surface or trapezoid of space compels me like a ghost. I want to dwell there.

The small strange triangular corner of Minnehaha and 27th Avenue attracts me this way. There is a moment where the street splits like an unconditioned hair, just before it seems to end. There is a tiny morsel of street that veers away at the final moment, a wayward rivulet forming an island of old Minneapolis that remains perched on the edge of the great river of cars.


Walking north along Minnehaha you will find this urban waterfall marked by flags: the 50s post office flag first of all, the rainbow flag of the harlequin cabaret, the MIA flag of the Minneapolis police station, a decent enough building that still manages to fold its arms in buttress against the onslaught of the city.

In some ways, this island of old Minneapolis is forgotten and forlorn. Empty windows gape, slowly clouding. Apartment plumbing rusts away. The sushi restaurant, one of only two or three eateries that has managed to survive this pedestrian precipice, is closed due to flooding from above. They promise to re-open soon. 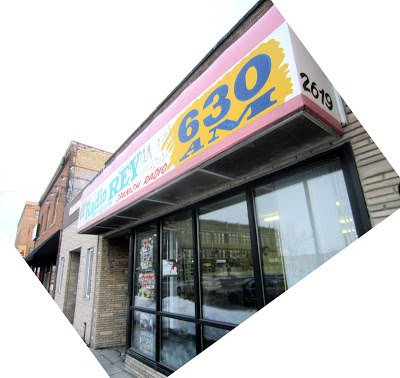 Yet here is Latino Minneapolis. The AM radio station with its faded awning is all business, a small grey office cluttered with paper. A sometimes notorious dance club fills up the old Oddfellows Hall, a detailed beige building so beautiful it sinks in your stomach. In the evenings, on weekends, this corner fills with life. During the day, pawn shops and check cashing stores exploit the weak before taking a siesta.

One of the many wonderful quotes about Paris included in Benjamin's Arcades Project is this: "The universe does nothing but gather the cigar butts of Paris." This corner gathers the beer cans of Minneapolis. The most starkly modern of the city's 50s liquor stores curves like the dashboard of a car with fins, its windows papered over with crimson. 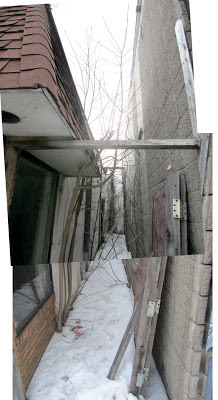 To stand there on the sidewalk and gaze across Lake Street is to confront the abyss. It is both literally and figuratively an Auto Zone. Vast parking lots and an unfortunate freeway stretch out. The light rail station seems an impossibly distant horizon, teasing you with its high wire routine. Reaching it would be a circus performance, dashing before dashboards, crossing vast concrete. In the distance, Target and Rainbow and god knows what else sink in endless absence. Somewhere on the other side the city begins again, but from here one can only gaze across the paved canyon and cling to the edge, this lifeline of sidewalk.

If I had a giant concrete flower planter or two, I would plunk them in the middle of this little fractured road. I would place them in the middle of 27th Avenue, stem the flow of cars, and fill them with marigolds. They would reach up to kiss sunshine before the city's most beautiful mural, looking down and splitting light into small glints skipping along the street.

This corner attracts me like sunlight, the golden sublime. I wander and kick an empty beer can into an alleyway filled with wood painted long ago, now fading in old snow. There's nothing here, but I can't bring myself to leave.

This corner was the focus of my comments for the Midtown transit alignment meetings. Why stop at Hiawatha, when there are sooo many great destinations just two blocks further east, and when those two blocks are so horrific to the pedestrian? Get me to Patrick's Cabaret, and Ghandi Mahal, and so much more!

You are quite poetic in your description of the bad of the Minnehaha, 27th and Lake Street Triangle. There are indeed some vacant buildings, a pawn shop and check cashing place, some way too wide streets, and Strip Mall Mecca north of Lake Street. But you've missed entirely the great aspects of the triangle. The wonderful Gandhi Mahal Indian Restaurant and gathering place, the bright and tasty Mosaic Cafe, and now old-timer micro-brewery Harriet Brewing all live in the triangle. The Hub Bike Co-op's biggest shop is there, as is T's Place (Ethiopian) and Rodeo restaurant and event center. You mentioned Patrick's Cabaret, but it has provided life to the corner for years. The East Lake Library (remodeled several years ago) is a warm, modern refuge from Lake Street, and HCMC's East Lake clinic serves thousands of people in its home in one of the beautiful old buildings.

This isn't a wasteland or some dying relic in the city. While not the ideal cityscape, this triangle of streets deserves to be experienced, not because there is "nothing here," but because of all that is here.

Seldom get over there anymore but I always liked this area. I miss Nightfall Records and Grandma's Kitchen. Early 90s, there were occasional raves in ballroom above what I imagine is now Rodeo and in later years there were punk rock shows at Mala. I even liked the weird Denny's in the Podany building.