Pete Lebak & the Price of Progress

I bet that I remember every barber shop I’ve been to in my entire life. The first was on Smith Avenue in West Saint Paul, and had fake wood partitions topped with wooden bars and frosted glass light fixtures attached to a ceiling fan. There were green plants. My mother only took me there once, for some reason.

The first place I went to on my own was a barber shop in Diamond Jim’s Mall on Highway 13. The barber there was the father of a kid I knew from Boy Scouts, and so that’s what we always talked about. That was the first time that I ever gave someone a tip, and I remember how weird it felt. There was the sports barber in college who pointed out my bald spot for the first time. There were a wayward series of barbers in New York. I'd just wander around the city with long hair and go into somewhere that looked interesting. I remember one well-lit place near Greenwich Village with a Latino barber who had never heard of Minnesota.

I remember the place on Grand Avenue that I went to most often, with Dick the barber. And the other place on Grand, and the place on West 7th across from the thrift store, and the fancy joint downtown with great tall windows onto the sidewalk outside and the shoeshine man lingering nearby the whole time. There was the one on Selby next to the coffee shop, and the one in Northeast by the old Slovakian church that has the statue in the steeple with the arms stretching out trying to reach the sunset. But all that was years ago. Ever since then for a long time now, it's been Pete Lebak Barber Stylist, a small dirty shop on the top of University Avenue that seems like a fossil fragment of some ancient large animal.

Now that I let myself think, it’s funny that I have so many memories of barber shops, that I can hop carefully along them like stones crossing a stream leading back all the way to the earliest images in my mind. Maybe its because the experience of getting your hair cut by someone else, a half-stranger, is so different from everything else in our lives. They touch your head and there’s a special chair. The sharp scissors are close to your ear so that hearing their particular whipclick is almost like thinking a thought. And this is not even to mention the intricate layered cultural dynamics of the barbershop, which have rightly become the stuff of legend, and demarcate a whole subtle cultural set of worlds surrounding race and ethnicity and gender and age and cultural traditions (e.g. sports) and varying uses of language being passed on (e.g. the telling of jokes). Barber shops are probably the last bastions of stereotypes, which makes them even more intimate and important in some ways. I’d bet that more political opinions are solidified in barber shops than in all the robocalls and door knock visits in all the swing states in all of America.

The cutting of hair (for men or for women, by the way, women who have their own separate and distinct set of social architectures surrounding “the salon” about which I know very little, and am happy to stay ignorant about the whole thing mostly out of respect for autonomy, but also because it's frightening) is very special. It’s not too much to say that this ritual is the last remnant of an earlier era of intimate servitude which was surprisingly varied and commonplace. Not to mention that, despite the efforts of Great Clips, haircuts remain one of the last domains of the independent businessperson, still uncolonized in our standardized robot world of chains. All of this is why, under normal circumstances, I’d never tell you about my barber Pete. Normally, Pete would remain a closely guarded secret, disclosed only to the worthy, offered like a precious sweet thing purchased at great price.

But these are not normal times, and I will divulge. I first came across Pete Lebak, barber stylist, on a recommendation from one of my oldest friends, the kind of friend whose advice you unhesitatingly follow, whose taste has been vetted over decades of long conversations and exchanges of music, books, or shared stories. He told me that “I had to go to his barber, Pete”, and then told a highly compelling Pete story. As I was wandering sans coiffeur at the time, I gave it a try. 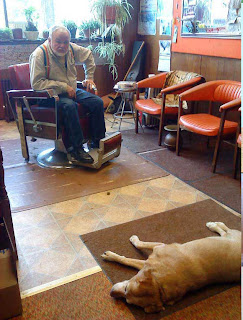 Pete’s shop is in one of the old buildings on University Avenue on the top of the hill across from the KSTP television antenna, and to get to it involves going down a narrow dingy beige hallway with incredibly old carpeting and a little metal box hanging on the wall that has the words “we are now entering the electric age" written on it with permanent marker. You snake around a little bit past the room that is continually recycling tenants (the most recent being a masseuse), and past the secret back door to Schneider’s Drug Store (itself a small business legend) before finding Pete’s little shop room on the other side of a door.

On the threshold you'll inevitably encounter a yellow Labrador sprawled out on its side, barely interested in moving, over whom you'll have to step. There have been two such dogs in my time at the shop. The first was named “Useless”, but she died. This one is named “Bug”, short for ladybug.

Next you'll look to find Pete, usually alone, sometimes smoking a cigarette, and usually reading a popular history book checked out from the library (e.g. something about World War II, something about colonial era America or something like a biography of Balzac). Pete's a man with a grey beard and a belly barely contained by its shirt. He's always wearing a pair of suspenders, either rainbow or red. After you step over the dog, he’ll look at you with sharp eyes for five long seconds without saying a word, and then return to his book, turning the page. So then you sit down in one of the old brown chairs next to the door and wait, surrounded by old coathooks and endtables bearing a heap of reading material ranging from Outdoors Weekly (the local hunting periodical) to middlebrow novels to historic airplane restoration magazines to almost yellowed copies of Playboy.

You’ll sit there for a minute that lasts forever while Pete finishes his chapter, and you'll let your eyes wander around the room to take in the amazing décor mounted on every wall… an old Wellstone sign next to one that says “gun control means using both hands”, a picture of FDR underneath a deer head, an entire wall covered in stickers from bananas, another wall filled with old photographs and business cards held up by pins, a hunting bow, a two-foot spittoon, a big mirror with more old political stickers, and then Pete will ll thump the book closed and say something like “Allright get in the chair,” or “What do you want?” or “I suppose you want a haircut” or (one time only, when I’d let my locks get particularly long) “You look like a blowed up couch.”

Then he’ll cut your hair for $14. Pete’s haircuts are pretty good for me. They're probably not for everybody, to be perfectly honest. But that's really not important. The reason my friends and I go to Pete is for the stories. Each time I’d run into one of my fellow Pete clients in the hallway or on the street or at a party, we’d inevitably start swapping Pete stories like kids with baseball cards.

To hear Pete’s stories is to collect rare artworks. It seems like there’s nowhere he hasn’t been, and nothing he hasn’t done. I remember once having my hair cut in wintertime and mentioning how cold it was, and having Pete say “Oh that’s nothing,” before recounting his time in Newfoundland, the Aleutian Islands, and Tierra del Fuego, all of which paled next to the indescribably cold winters of the Yukon. That Pete has almost literally been to the four corners of the hemisphere is only the beginning of Pete’s collection of experiences, which are almost Forrest Gump-like in their breadth and historical serendipity. There’s the secondhand Pete story about the shipwreck and the other one about the CIA in Africa. And there surely are stories about Vietnam that are told only in the silences when one of his war buddies appears and sits in the shop for an afternoon. There are stories about his Acadian roots in Quebec and Louisiana and stories about places he likes (South Dakota, Arkansas) and places he doesn’t (Texas, almost any city). I can’t tell you any of these stories, as doing so would be a huge violation of barber-client privilege.

In fact, the only reason I’m even talking about my barber Pete in the first place is because these are unusual circumstances. These are strange times. Pete’s shop is one of the many businesses on University Avenue being impacted by construction. Pete has the added bad luck of being right on the seam of two of the “phases” of construction, so that he’s to endure twice the amount of construction chaos as most places. Business is down as a result of people avoiding the area, and Pete’s demeanor has changed noticeably.

For example, it used to be that I would come in and get my hair cut, Pete would grumble about the shop and talk about quitting. Multiple times he threatened to give it to me. Now, though, Pete couldn’t be more sentimental. He says things like “I don’t want to lose my little box” and “It would break my heart if I had to leave this place.” One of his customers actually made him a website, and there’s a sign on the window with the url even though Pete’s never actually seen what the website looks like. The last time I was there, Pete held up a giant QR code and said, “What the hell is this thing?” But he still put that strange pixelated blob in his window, hoping that somehow he can stay in business for the next year.

The idea of losing shops like Pete’s, or the wonderful old buildings slated for demolition on Lyndale for the new Trader Joe’s, certainly should give pause to anyone excited about new development. While I’m very excited about the future of University Avenue with a train going down the middle of it, there must be a way to try and hang onto the little shops that provide all the diversity and character that I love about the Twin Cities. Maybe it’s something like strengthening the Twin Cities Independent Business Alliance, which has for a long time been trying to boost local small retail with only medium success. OR, perhaps a “keep St Paul weird” campaign like the ones they have in Portland or Austin Texas would help. In the meantime, I’ll be getting my haircut a bit more often than usual.
Posted by Bill Lindeke at 1:21 PM