The Beauty of Forlorn Windows

I like to think that empty windows are widows, longing for their loves, that if windows have a desire, it’s to be actively invisible, not to petrify. I think they come to life only when looked through, when the gaze of a thousand unique eyes passes their glass seeking the other side, that windows are happiest in translation between inside and outside, and that a forgotten window is impossibly lonely. Longing makes it dirty, the glass collecting a chalk film of dust, rusting, aging, graying, growing pallid. Each day it is forgotten, a forlorn window pales slowly more opaque until one day, unheralded, someone looks up and the glass has become bricks, has become yet another blank wall, its transparent past legible only in the careful inspection of stones.

Our world is filled with these widowed windows, still waiting to turn heads, old windows that display long memories. The windows remember the time of streets, earlier sidewalks filled with wondering wanderers, when the shops inside gathered treasure behind them. Dioramas. Piétas. Displays of impossible wealth. Deals and sales and specials and signs and jokes in many languages. Today windows once filled with life are but liabilities for a parabolic rock.

The problem is that windows, like much of the old city, are trapped in chains of cause and effect. The fewer people who walk by, the fewer heads that turn to glance glassward, the less any business pays attention to their window, and the more boring windows become. And conversely, the more bleak and blank the windows, the fewer interesting sights placed inside them, the less that people feel enticed to walk the sidewalk, the more the street will abandon itself to exhaust. Everything is connected by the gaze. Pedestrians and shop windows need each other to be happy. Today, alas, shop windows and the heads they turn are estranged. Both sides are lonely, forgotten, depressed. Shop windows don’t know what to do, and spend their days in the dark waiting their end, while pedestrians go on endless forgettable dates with lackluster walks through malls that don’t excite them. Somehow, we need to get these two back together!

And that’s when the Artists in Storefronts project appears. I had the recent pleasure of participating in an effort by Twin Cities’ artists Joan Vorderbruggen, a local artist and public space practitioner. Joan’s artistic medium is the shop window, designing window displays for businesses to catch the eye of the distracted consumer, and in an earlier time she wouldn’t have to go about drumming up interest in her craft. You can read all about it elsewhere, and I won’t waste your time tooting that particular horn. (The tour was great, and so is the project, etc. How wonderful it would be if we  could it were replicate it all through the city!) There's another tour this Saturday!


The first thing is that store windows blur the line between art in commerce in a way that would make Warhol green. One of the stops on the tour is a window display made by a blind woodworker who lives in the Whittier neighborhood above his shop. He’s constructed a beautiful set of shelves for his shopwindow, and they display a fine collection of pottery made by another local craftsperson. Is it art? Who cares? There’s a cat, and it’s beautiful.

A artful shopwindow sits right on the line of art, commodity, and aesthetics. A good shopwindow is the art of everyday life. Why shouldn’t our streets and buildings be beautiful? Why shouldn’t our walks be rich and filled with detail, with careful attention. If each shopwindow contains something rich and intriguing, if every doorknob is beautiful, and every railing and every lamppost a thing to stop and admire, if every patch of green contains a flower, then the world has become a work of art and each clerk and barista and bouncer has become an artist.

The second thing I realized while walking through Whittier was that there are some abandoned shopwindows are already beautiful, already everyday artworks in their own right. In fact, some of these windows were infinitely more interesting than the ostensible art installations on the tour. One of my favorites is the strange and mysterious Past Present Future building across Franklin Avenue from the Electric Fetus, an old hotel that sits deeply alone next to the freeway wound. Though nobody is there to see it, this windows of this building are stacked with old furniture, and form a antique kaleidoscopic snowglobe of dust that feels like being bathed in the memories of ghosts. This shopwindow isn’t technically on the art tour, but attracts me like an Earth magnet. 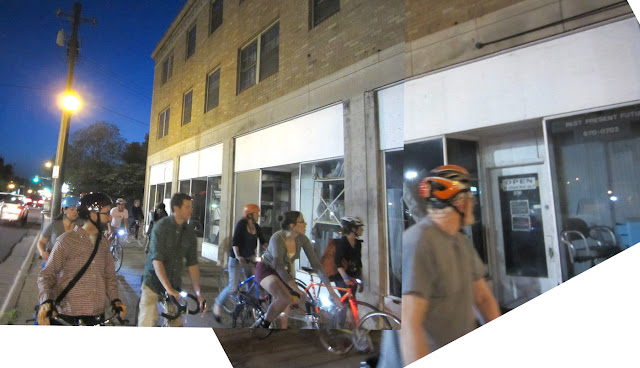 The other DIY art shopwindow is right on 25th Street, between the Whittier neighborhood group headquarters and the Spyhouse coffee shop, an old storefront that has become an old man’s home. I chatted with him one day and asked him about his unusual window décor. He said it’s just something he does, displaying some of his collections of old stuff. That doorway is an everyday wunderkämmer.

Today cities have finally started to recognize the importance of windows in everyday life, and have done things like pass transparency requirements for new building construction, trying to frustrate the attempts of developers and businesses to keep their spaces to themselves. Of course, as anyone whose ever tried to peer into the Snelling CVS can attest, some of these ordinance windows remain symbolic windows, part of a growing plague of façade urbanism, fake second stories and fake neighborhoods and fake parks for our fake cities.

We need windows as much as windows need us. If everyone had an interested in their window, maybe we’d all walk again. Take a moment right now, look around whatever room you’re sitting in and find the window closest to the street. Now place something interesting inside it, maybe a small sign or a tiny plastic dinosaur, a big red 'A', or a dry flower. Be creative, and then close your eyes and imagine the face of someone who notices.