One of my favorites is this misleading all-campus email, which included two incredibly badly made charts showing comparing salary and benefits for graduate students.

Check out this graph that the Office of Human Resources sent out, comparing pay at the University of Minnesota to the "Big 10 Average Pay": 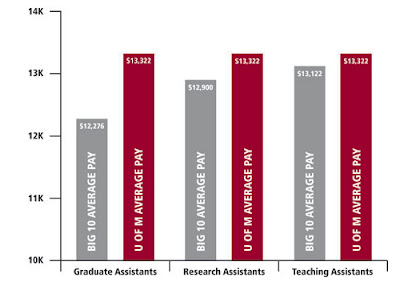 I'm not going to quibble with the University's numbers. But any scientist who knows anything about anything would look at this graph and roll their eyes.

Forget about the really problematic X-axis for a moment. The main problem with this graph is that it  doesn't account for large cost-of-living differences between Minneapolis and any of the other places that "average Big 10 Schools" are located.

Minneapolis is a major American city, the 15th largest metro area in the country. The University of Minnesota-Twin Cities is one of the only large land grant schools located right in the middle of a city.

Just check out these cost of living comparisons from a well-known real estate website:


On the whole, most Big 10 schools have costs of living that are between 10% and 20% LESS than Minneapolis. The only comparable Big 10 city is Evanston, IL,  home of Northwestern University. Other than that, every Big 10 school is located in cities and towns with far cheaper rents and expenses. Your grad student paycheck would go a LOT farther if you weren't living here.

The University's email barrage have been highly condescending. It's safe to say that any graduate student at this school could poke holes in their arguments about why we DON'T need a union. And I hope that they do!

P.S. Don't even get me started on this stupid pie chart: 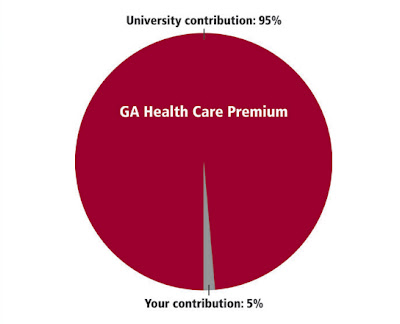 FYI adjusted for cost of living difference you reported the U of M avg pay is $11,416.42. That would be lower than the Big 10 average in the bar graph.

That stupid pie graph... That slice is not even 5%! If you look closely, it's about 5 degrees, whereas a 5% slice should be 18 degrees. That's not just misleading, it is factually incorrect, and thus, a lie.

Excellent brief and this article helped me alot. Say thank you I looking for your information Thanks

Salary offered in one country may not be necessarily sufficed to sustain in another country. Individuals in big number relocate to another country for work assignments, sometimes for better growth prospects every year, with some of them fear cost of living crisis.