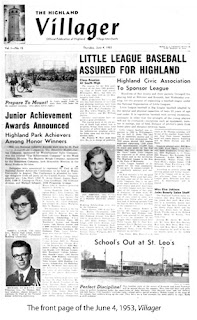 Short short version: Empty space near the new "victoria park" area on West 7th street is going to be turned into a park, and the city is trying to get people to be on a Tax Force to design it. A while back neighbors got upset by the suggestion of using the space for soccer fields, and raised a big stink. Hopefully they can find something more better this time. [Cricket pitches? -Ed.]

Short short version: Report on the [snark] situation about the ex-potential for a new delicious bakery to move into Grand Avenue where  an old clothes boutique used to be. Story goes into details about the city council vote. Includes quotes from bakery owner VanDeraa (such as "I don't know what I could have done") and CM Thune (such as "We're so close!"). Also includes quote from the Summit Hill Association about the "severe parking shortage ... [which] is the problem that the SHA [abbrev. for Summit Hill [property value] Association] hears the most about." Parking, its right up there with taxes and the weather. [Which is why we should do everything we can to make sure that any new business includes a huge external off-street parking lot, because what walkable neighborhood walkable neighborhood is complete without large surface parking lots? I can't think of any. -Ed.]

Short short version: Wow! It's like daylight savings time for Grand Old Day. It might end at 6 instead of 5:00 now. [I'm sure the Summit Hill Association will try to make sure there are enough parking spots for the 10,000 people walking up and down the street. -Ed.]

Short short version: There was a public meeting about the Pizza Lucé's semi-non-significant plan to build a parking lot across the street from their pizza place in a space that they tore down next to an old commercial building. The driveway requires a variance. Neighbors don't like it. They have a few reasons, such mostly having to do with cars driving around, "light and noise pollution", and "safety." [It seems like people don't like cars backing out into Selby Avenue. Why? Because it slows traffic down? Would they rather NOT have a delicious pizza place in their neighborhood that you can walk to? (I guess so.) Of course, I'm also NOT in favor of more parking lots in a city that should be getting denser. I don't know. This seems really minor. But then again, a friend of mine was at this meeting called it "the most contentious neighborhood group meeting he's ever seen." Considering he's been going to roughly 2-3 St Paul neighborhood meetings every week for 10 years, that's REALLY saying something. Why does parking one's car tap so directly into people's incredible Hulk-like rage-lizard-brains? -Ed.]

Headline: Ford Site Task Force gears up for another round of planning; renewed redevelopment effort will begin March 5 with review of past studies
Reporter: Jane McClure

Short short version: There's a "task force" that's trying to plan what to do with the Ford Site once the old auto plant starts getting demolished in the summertime. They basically haven't decided anything yet, but its not going to be an "education and training center."

Short short version: There'll be an open house about the Jefferson bikeway, where "neighbors are invited to sound off." [Oh good.] Public Works is running it [, which probably means that it'll involve a large orange sign placed int he middle of the road that says, "Hate this stupid sign? If so, please call xxx-xxxx to complain," at which point they'll tally all the calls and use it as a proxy for public opinion. -Ed.] Article includes [deadpan] description of last year's bike boulevard fiasco.

Short short version: There was a "hearing downtown about the Great River Passage, a plan for parks along the Mississippi. Article includes detail that the SHA has voted to approve it. [Provided of course that there is a new 29,999 space underground parking ramp built along Grand Avenue between Lexington and Victoria -Ed.]

Short short version: Article about how the LRT construction people are changing based on feedback they received during last year's construction. Changes seem to be mostly about increasing pedestrian access, increasing the pace of work.

Short short version: Article about Metro Transit's plan for BRT corridors in St Paul. Includes [dismayingly dismal] quote from CM Thune saying "It's the Riverview Corridor all over again. I don't know how many times a neighborhood can say 'no'. [Because improved transit access is a terrible idea! Article includes awesome BRT map that has a special stop marked "Mickey's Diner," that's presumably only for people going to Mickey's or the Nut Roll factory. -Ed.]

Short short version: The Planning Commission approved a McDonald's on West 7th Street that will have "more parking that is allowed" and a second drive through window. [I missed this meeting, alas.] Article includes quote from McD's representative Roy Crouston. [Is that a typo? Should it be "Crouton"? -Ed.]

Short short version: Editor Mischke is upset about all the NIMBYism in St Paul. [...at least, as long as it doesn't have anything to do with bicycles] Editorial goes over the Pelham project, the Cupcake bakery, and the Pizza Lucé parking lot situation and lambasts people's negative anti-development attitudes. [Do I find myself agreeing with Mischke? I guess so. -sigh- -Ed.]
Posted by Bill Lindeke at 1:24 PM

My god - Dave Thune? I thought he was supposed to be the cool one. Clearly he has no idea what Rapid Bus is, and I suppose it doesn't hurt a St Paul politician to say something negative about transit.

the rankings are always slipping, always contingent on micro-turf, but I'd say Thune has fallen to the bottom half of St P urbanist city council rankings (if such a thing were to exist (which they don't))

I just want to say that I found this blog a week ago while searching for commentary on the *ahem* questionable quality of reporting in The Villager, and I love it. It's sad that what could be a fantastic source of extremely local news is instead veering so far into what I can only think of as an anti-city soap box. I don't know about all these people writing for and to The Villager, but I moved to Merriam Park from the suburbs because I WANTED noise, walkable neighborhoods, shopping on my block, and an option to get around that doesn't involve my car keys. It boggles the mind that so many NIMBYs are up in arms about bike boulevards, medians, and filling empty storefronts. If only they'd GTFOMBY.

It's refreshing to see that I'm not absolutely crazy for not wanting St. Paul to be a clone of Apple Valley. Thank you.

Woah. Dave Thune is sooo not the cool one. He's about the 7th coolest, to be precise. About ten years ago, Thune led the charge to kill a FUNDED West 7th BRT project(aka Riverview Corridor). Don't let him fool you with the Hawaiian shirts and tea shop.

Thanks for the scoop on Thune, Bill and An. I'll remember that next time I need to think about St Paul politics.